A deep red, rococo-inspired wallpaper covers all four walls in the innermost room of the Philosophy Chamber exhibition. Its ornate design, inspired by the original wallpaper that hung in Harvard’s 18th-century Philosophy Chamber, is hard to miss in a space otherwise dominated by cool white walls.

The richly hued wallpaper helps transport visitors back to the original Philosophy Chamber, which was at once a picture gallery, scientific laboratory, and lecture hall. The room comes closest to delivering the show’s promise of a chamber.

“It comes toward the end of the journey in this exhibition,” explained Justin Lee, an architect based in nearby Somerville, Massachusetts, who helped design the special exhibition Philosophy Chamber: Art and Science in Harvard’s Teaching Cabinet, 1766–1820. “We wanted to have a space that signified what the Philosophy Chamber was like when it was most actively used.”

From 1766 to 1820, the Philosophy Chamber was located in Harvard Hall and contained Harvard’s vast collection of artwork, plant and animal specimens, scientific instruments, and artifacts. It fostered the study of natural philosophy, a discipline that explored the natural world and physical phenomena through methods and tools available from astronomy, mathematics, physics, and other sciences.

When the college library expanded in 1820, taking over the Philosophy Chamber’s space, the contents of the chamber were dispersed to various Harvard departments and local museums. Although the room that once housed the Philosophy Chamber still exists in Harvard Hall, this exhibition reunites many objects once displayed and activated there for the first time in 200 years.

As exhibition designer, Lee translated curator Ethan Lasser’s vision into the concrete space of the galleries. Lasser, the Theodore E. Stebbins Jr. Curator of American Art and head of the Division of European and American Art, began research and planning for the show in 2013, working with a team of curators, conservators, and other experts from both inside the museums and across Harvard. By the time Lee joined in the spring of 2015, the wallpaper element was already an integral aspect of the project. However, ideas about how the wallpaper would feature in the exhibition continued to evolve.

“Throughout, we tinkered with how to put the argument together,” said Lee. “As the exhibition developed, we tried to find different ways to express that through the wallpaper.”

At one point, Lee said, they considered projecting digital images of the design onto the gallery walls, but ultimately decided against it after determining that the size of the wall and the projector’s image quality would not support such an approach. This led the team to look into reproducing the wallpaper. The original had been block-printed onto handmade paper, varnished with adhesive, and then coated with powdered wool, in a process known as flocking. For the exhibition, the team chose a customized peel-and-stick reproduction, produced by Rhode Island–based company IO Labs.

Establishing the details of the design involved intense research and patience. Only a few small discolored wallpaper fragments remain from the original Philosophy Chamber—a sliver showcased in the first room of the exhibition features a brown design over a faded cream-colored background. After consulting with experts and through extensive trial and error, the team settled on the appropriate colors and density for the pattern.

“We spent a lot of time finding colors that we liked, that were not too overpowering,” said Lee. “We would look at samples that were maybe two feet by two feet, but the room is much bigger so we had to be careful with what we extrapolated from the samples.” 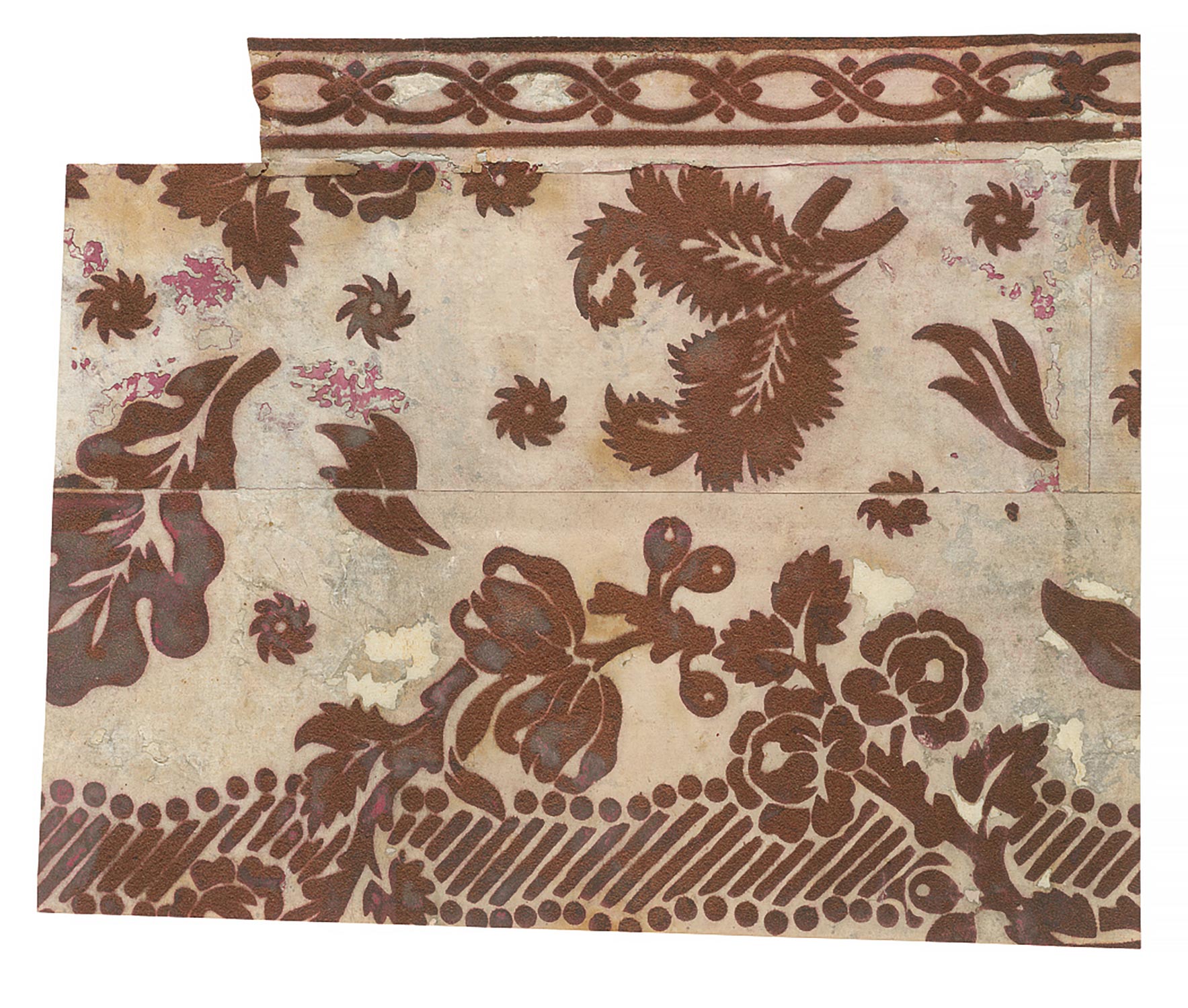 Contents of the Chamber

The team also deliberated over which objects to include in the wallpaper room. For example, four full-length portraits of benefactors (Nicholas Boylston, Thomas Hancock, Thomas Hollis III, and Ezekiel Hersey) are known to have hung in the original Philosophy Chamber. It seemed appropriate to reunite them—against the striking wallpaper reproduction—for the first time since the Philosophy Chamber collection was dispersed in 1820.

To reflect the teaching and scientific inquiry that took place in the Philosophy Chamber, the team chose works that were relevant to scholars of natural philosophy. On one side of the room stands an astronomical quadrant, a rare apparatus that measures the altitudes of celestial bodies. On the other, a tall wooden case holds two representative examples of the ten taxidermy bird specimens that Benjamin Waterhouse (1754–1846) used in the natural history course he taught in the Philosophy Chamber.

Lee designed the display case for the bird specimens specifically for this exhibition, keeping in mind both the character of the original Philosophy Chamber and the museums’ current objectives.

“The color of the case complements the atmosphere, the 18th-century feeling of this particular room,” said Lee. However, he emphasized, the team aimed to “re-create the space, without too literally replacing it.”

Indeed, the dramatic presentation serves as a link between past and present, catching the eye of contemporary viewers but also drawing attention to Harvard’s long history in the pursuit of knowledge and the advancement of art and science.

Anna Lin-Schweitzer served as the Summer 2017 writing and editing intern in the Communications Division at the Harvard Art Museums.