Today, Yanagi Muneyoshi (1889–1961) is widely regarded as one of the most influential art critics in Japanese art history. As the key figure of the Japanese folk crafts movement, Yanagi discovered, defined, and promoted previously overlooked categories of Japanese crafts, even founding the Japan Folk Crafts Museum (Nihon Mingeikan) in Tokyo.

Yanagi also played a central role in shaping Western understanding of the beauty of Japanese craft by way of his global network of collaborators, such as British studio potter Bernard Leach (1887–1979) and Langdon Warner (1881–1955), Harvard’s first curator of Asian art. Yanagi’s folk craft theory reached a wide audience through his lectures and exhibitions abroad as well as his writings in English translation. His intellectual legacy continues to grow with the Japan Folk Crafts Association, its periodical journal, and the Folk Crafts Museum’s exhibitions.

While Yanagi has received serious scholarly attention by Japan specialists both in and outside Japan, his special connection with Harvard is little known. Yanagi spent one year (August 1929–July 1930) at Harvard, lecturing on Japanese art and organizing two exhibitions featuring Japanese folk paintings and contemporary handicrafts. This was Yanagi’s first prolonged stay in the United States and the beginning of his collaborative phase with Langdon Warner. They became lifelong friends, sharing many thoughts and ideals in common. The pinnacle of Yanagi’s achievement during this time was the 1930 exhibition Japanese Peasant Painting at the Fogg Museum. Here, Yanagi celebrated the rustic, lively, and humorous pictures from the town of Ōtsu—Ōtsu-e in Japanese—as the summit of the so-called Japanese peasant painting tradition. It made a breakthrough in terms of Ōtsu-e’s reception in the United States.

The early Ōtsu paintings of the 17th century had their roots in Buddhist art; they gradually evolved into secular products over the course of the 18th and 19th centuries, incorporating everyday subjects such as contemporary and historical figures, gods, animals, birds, and plants. Their origin is deeply connected with the small station town of Ōtsu, one of the tourist attractions along the Eastern Sea Route (Tōkaidō) that linked Kyoto and Edo (present-day Tokyo). As inexpensive religious paintings or souvenirs, anonymous Ōtsu paintings were purchased by pilgrims after visiting the major temples in Kyoto and by travelers who passed through the town.

As professional artists began to pick up these popular Ōtsu-e motifs in the 18th and 19th centuries, the works became a source of inspiration for mainstream art, including ukiyo-e (“pictures of the floating world”), popular in Edo, Kyoto, and other cities. The popularization of Ōtsu-e subjects marked a new phase in the history of Ōtsu-e when they were no longer literally paintings from Ōtsu. In the woodblock print pictured below, Matsukawa Hanzan (1818–1882) adapted popular Ōtsu-e characters.

The Ōtsu-e image of the Wisteria Girl shows a beautiful young girl elegantly posed with a branch of wisteria. This idealization of female beauty was part of the visual vocabulary commonly used in the ukiyo-e tradition. The demon, or “Praying Goblin,” is perhaps one of the most popular subjects in the Ōtsu-e repertoire. The practice of chanting the name of Buddha was believed to be an immediate means for salvation by Buddhist devotees.

At first glance, this image appears to be a nonsensical, satirical scene of a devil who has converted to Buddhism. Or the message could be a warning against a devil disguised as a Buddhist priest. The falconer is identified as a high-class warrior by his ceremonial robe and two swords. As the review of the 1930 Harvard exhibition makes clear, birds such as eagles, hawks, and falcons also appeared as an independent subject in Ōtsu-e. These birds had been long portrayed as hunting companions and imperial pets in Japanese paintings for the ruling warrior classes, and the Ōtsu-e versions were made as cheap substitutes. Here, Hanzan depicted these popular Ōtsu-e characters in the ukiyo-e style with fine detail in full color. His print may also play with a well-known rebus for good fortune: the combination of Mount Fuji and a hawk or falconer was frequently used in New Year’s greetings, and the Japanese word for wisteria is pronounced “fuji.”

Yanagi is credited with reimagining Ōtsu-e as Japan’s “unique folk painting” in the early 20th century, and this categorization remains a powerful rubric to this day. Despite Yanagi’s modern definition, Ōtsu paintings underwent several transformations over three centuries, never achieving a coherent history in Japan’s folk painting tradition. The creation of Yanagi’s folk craft ideology in the 1920s was spurred by the impulse to define a unique Japanese consciousness in contrast to dominant Western ideals about art and artists. Yanagi advocated new values and meanings of Japanese folk crafts as a means to challenge the prevailing Western hierarchies of fine arts.

With the help of Warner, Yanagi curated the exhibition at Harvard; it featured about 50 Ōtsu paintings from Japan, some of which were from Yanagi’s own collection. In addition, Yanagi authored an English-language article, “The Peasant Paintings of Otsu, Japan,” published in the journal Eastern Art (July 1930). In the article, Yanagi celebrated the achievements of the anonymous Ōtsu-e painters, asserting that Ōtsu paintings “represent folk art in its purest form” and taking a position diametrically opposed to Western art history’s emphasis on individual artistic subjectivity and identity. This framework of Japanese folk painting was instrumental to the emergence of Ōtsu-e as a genre worthy of collecting and appreciating in the United States.

Prior to Yanagi’s exhibition at Harvard, Ōtsu-e had already been collected by some Americans interested in Japanese art, such as William Sturgis Bigelow (1850–1926), who donated his collection to the Museum of Fine Arts, Boston (MFA) in 1911. Yet even if Ōtsu paintings were collected, most American art collectors and critics were not clear on their aesthetic value. In 1928, the Asian art dealership, Yamanaka & Co. showcased 44 Ōtsu paintings with the title Otsu-e: Old Japanese Caricature in New York and London. It is worth noting that contrary to Yanagi’s definition, Ōtsu-e was introduced here in a manner shaped by the Western perception of “genius artists.” According to its catalogue, the Ōtsu paintings were juxtaposed with selected works by British caricaturist Tom Webster (1886–1962) to show the formal qualities and ideas shared by the great masters of Japan and the West.

In the same month as the Harvard show, the Metropolitan Museum of Art in New York presented a selection of Ōtsu-e in an exhibition titled Japanese Folk Art. Interestingly, Robert Treat Paine, curator of Japanese art at the MFA, used the Japanese term gete-mono (“low-grade things”) to describe these works on display. In a review, Warner wrote: “Already they [Ōtsu paintings] have become a fad and a matter of affection among the knowing. Soon they will take their place in the drawing-rooms of London, New York and Paris . . .”

In February 1950, Warner organized the second Ōtsu-e exhibition at Harvard, Otsu-e: Japanese Peasant Painting from the Village of Otsu. This was Warner’s last exhibition at Harvard, and it reveals his continued interest in Ōtsu-e. This time, all 38 works were from American collectors and museums, including from the MFA and the Seattle Art Museum. As Warner had predicted, this second show at Harvard proved that Ōtsu-e had gained recognition as representative of Japanese folk painting two decades after Yanagi’s 1930 exhibition.

Yanagi successfully introduced the concept of Japan’s unique folk painting tradition in the United States through his Ōtsu-e exhibition at Harvard. Yanagi did more than curate; he proved to be a skilled marketer as well, promoting his show through a variety of methods including newspaper advertisements. As a result, Yanagi gained great publicity in the United States for his definition of Japanese folk painting. From this experience, he learned not only the importance of curation, but also the potential of a museum to attract an audience, educate tastes, and, eventually, help sell Japanese folk crafts.

Seung Yeon Sang is the Henderson Curatorial Fellow in the Division of Asian and Mediterranean Art at the Harvard Art Museums. She would like to thank Fletcher Coleman and Houghton Library for generously sharing the image of Yanagi Muneyoshi. 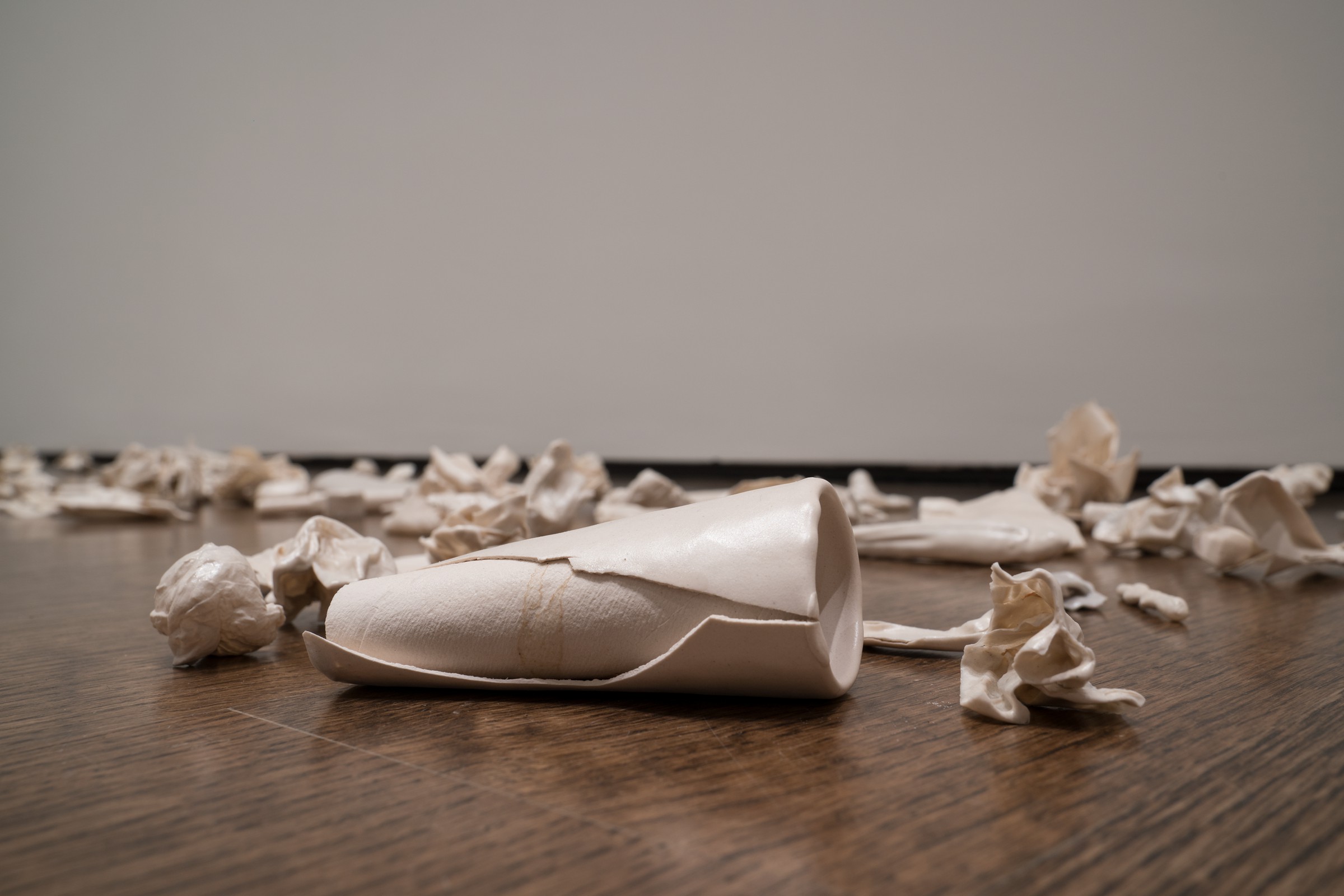