Paint rollers, brushes, canvas pliers, acrylic paints, and tweezers are some of the materials featured in a new exhibition about American artist Barnett Newman at The Menil Collection in Houston. Barnett Newman: The Late Work, on view through August 2, 2015, focuses on works from the artist’s final five years (1965–70) and on their distinction from earlier works. On display are 21 paintings (including three unfinished works that have never been previously shown in public), two sculptures, and an assortment of Newman’s studio materials.

“Newman was a very private painter, and virtually nobody saw him work in his studio, so we can infer only indirectly how he worked, based upon his materials and images of his studio,” said Brad Epley, the Menil’s chief conservator, who co-organized the exhibition with curator Michelle White.

The studio materials featured in the exhibition are on loan from the Center for the Technical Study of Modern Art (CTSMA), cofounded by the Harvard Art Museums and the Whitney Museum of American Art. CTSMA collects, preserves, and studies the materials and issues associated with the making and conservation of modern works of art.

The gift of Newman’s studio materials and related ephemera came about in the mid-2000s. While writing Barnett Newman: A Catalogue Raisonné (Yale University Press, 2004) along with Richard Shiff and Heidi Colsman-Freyberger, CTSMA founding director Carol Mancusi-Ungaro relied heavily on a collection of Newman’s materials.

Convinced of the richness of that collection and how it would enhance and broaden an understanding of Newman’s work, Mancusi-Ungaro appealed to the Barnett and Annalee Newman Foundation to consider giving the collection to Harvard. The foundation agreed, and Harvard gratefully accepted. In 2007, those materials were incorporated into CTSMA’s holdings, where they complemented its existing archive of correspondence and conservation treatment reports related to Newman, as well as works of art donated to Harvard by the artist’s wife, Annalee. The materials have since inspired and encouraged further research among scholars and institutions, with the Menil being one significant example.

“We are delighted that the Menil had such an interest in these materials, and that they have proven to be so meaningful to research,” said Mancusi-Ungaro. “The materials offer a sense of the artist’s technical interests and studio practice.”

Newman’s rollers and brushes, for instance, many of which still bear residual paint, help answer the question of how he covered his large canvases. Epley’s study of Newman’s materials and works has led him to believe that Newman was increasingly relying on paint rollers toward the end of his life. Several tweezers, many of them also paint-dappled, are also among the tools on view in Houston; they support anecdotal evidence that Annalee used tweezers to remove errant brush hairs from the artist’s painted canvases.

Besides reflecting the mounting interest in technical art history, and the study of artists’ materials and methods as a way of informing curatorial and interdisciplinary knowledge, the exhibition is noteworthy for presenting unfinished works. The debate over whether unfinished works should be publicly shown has intensified in recent years. Proponents believe they can contribute to a more well-rounded understanding of an artist’s output, while opponents argue that it would disrespect an artist’s wishes to display works not intentionally created (or completed) for public viewing.

With the Newman Foundation’s endorsement, the Menil chose to hang Newman’s unfinished works in a gallery separate from the spaces featuring his finished paintings. The studio materials are in an adjacent gallery.

“We felt the unfinished paintings allow a bit of a glimpse into Newman’s working,” Epley said. “Being able to show the materials that were part of that process at the same time is really important to convey the new territory that Newman was covering in these paintings.” 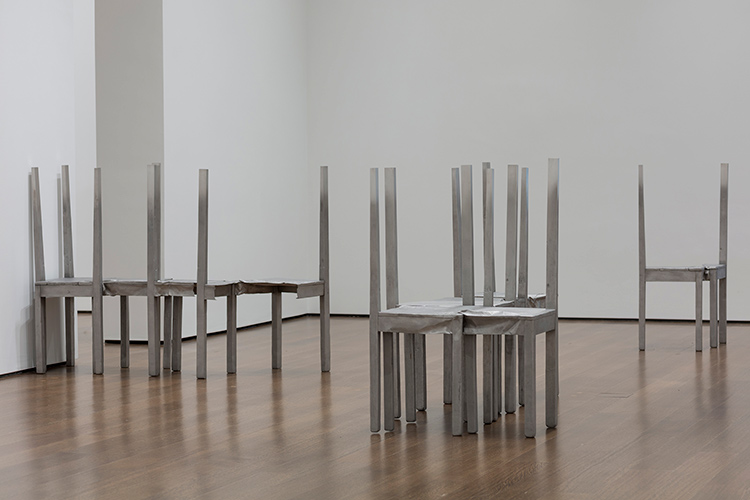 The sculptures in the special exhibition Doris Salcedo: The Materiality of Mourning attest to the Colombian artist’s exhaustive focus on details and her emphasis on handmade materials. 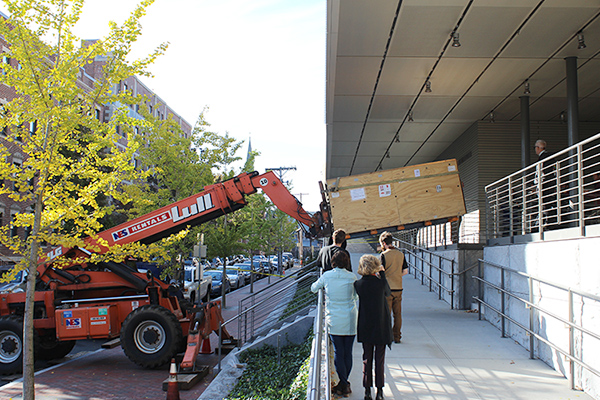 The sheer size and weight of two untitled furniture sculptures in the special exhibition Doris Salcedo: The Materiality of Mourning presented formidable challenges to museums staff. A Conversation with Doris Salcedo

In Cambridge for the opening of our special exhibition Doris Salcedo: The Materiality of Mourning, Colombian sculptor Doris Salcedo sat down with exhibition curator Mary Schneider Enriquez and us to answer a few questions.