It’s been nearly 200 years since the debut of Théodore Géricault’s groundbreaking The Raft of the Medusa at the Paris Salon of 1819. Yet it remains as provocative and inspirational as ever—look no further than a recent music video from Beyoncé and Jay-Z, in which the painting serves as a backdrop for biting cultural commentary.

The Raft of the Medusa (1818–19) depicts a scene from the aftermath of an infamous 19th-century French tragedy in which 150 soldiers and other passengers from the naval frigate Medusa were stranded at sea for nearly two weeks aboard a makeshift raft. Only 10 people survived to tell of the ordeal, which included starvation, drowning, and cannibalism.

Though the painting is on permanent view at the Louvre, its admirers can soon appreciate related works and other Géricault drawings, watercolors, lithographs, and paintings through an exhibition at the Harvard Art Museums. Mutiny: Works by Géricault (September 1, 2018–January 6, 2019) features approximately 40 objects by the Romantic artist, most of which come from the museums’ own holdings.

“We’re lucky to have one of the most comprehensive Géricault collections in the country,” said A. Cassandra Albinson, the Margaret S. Winthrop Curator of European Art, who put together the exhibition. The collection was assembled and given to the museums in the first half of the 20th century in large part by Harvard benefactor Grenville L. Winthrop, and the terms of his bequest stipulate that Winthrop Collection objects cannot travel beyond the museums. The exhibition is rounded out by other generous gifts from donors past and present, including three Boston-area collectors.

A Brief but Influential Career

Born in 1791, Géricault lived only to the age of 32. His artistic practice coincided with Europe’s Restoration period, which lasted from roughly 1814 to 1830, and with France’s efforts to emerge from the tumult of revolution and the Napoleonic Wars. “People were trying to grapple with the aftermath of violence,” Albinson said. “Géricault really dug into questions of what that meant for society.”

Many of Géricault’s works focus on the everyday, as well as the “casual brutality of modern life,” as Albinson put it. The dispossessed and downtrodden figure prominently—defeated soldiers returning from battle in the 1818 lithograph Return from Russia, for example, or a paralytic woman portrayed in an 1821 work. Géricault also had an interest in depicting domesticated animals, perhaps making an implicit connection between the constraints placed on animals and the mistreatment of the urban poor by society at large.

Organized chronologically in four sections, the exhibition explores these themes in depth. Though Géricault is today famed for his paintings, he also produced masterful watercolors and drawings. In his lifetime, he was most widely known for his prints, and was an early practitioner of lithography. He briefly experimented with “stone paper” prints, which were made using a prepared paper that replicated the properties of the limestone typically used for lithography. One of his surviving stone paper impressions, Lion Devouring a Horse (1821), will be shown in the exhibition, along with the matrix Gericault printed from.

Developing The Raft of the Medusa

One section of the exhibition is devoted to Géricault’s extensive preparations for The Raft of the Medusa (together with other studies that reflect his interest in contemporary social issues). The watercolor The Mutiny on the Raft of the Medusa (1818) is one of the largest and most detailed of his preparatory works.

“In this amazing graphic work, Géricault explores what kind of story he wants to tell in his final painting,” Albinson said. Several of the figures in the work—including a man clasping his hands in prayer on the far left, and a nude tumbling into the sea—were later repeated in Géricault’s completed work. Other features differ markedly: the Harvard drawing shows a battle unfolding aboard the raft, while the final painting offers a greater sense of salvation, with one man heroically flagging down a passing ship. 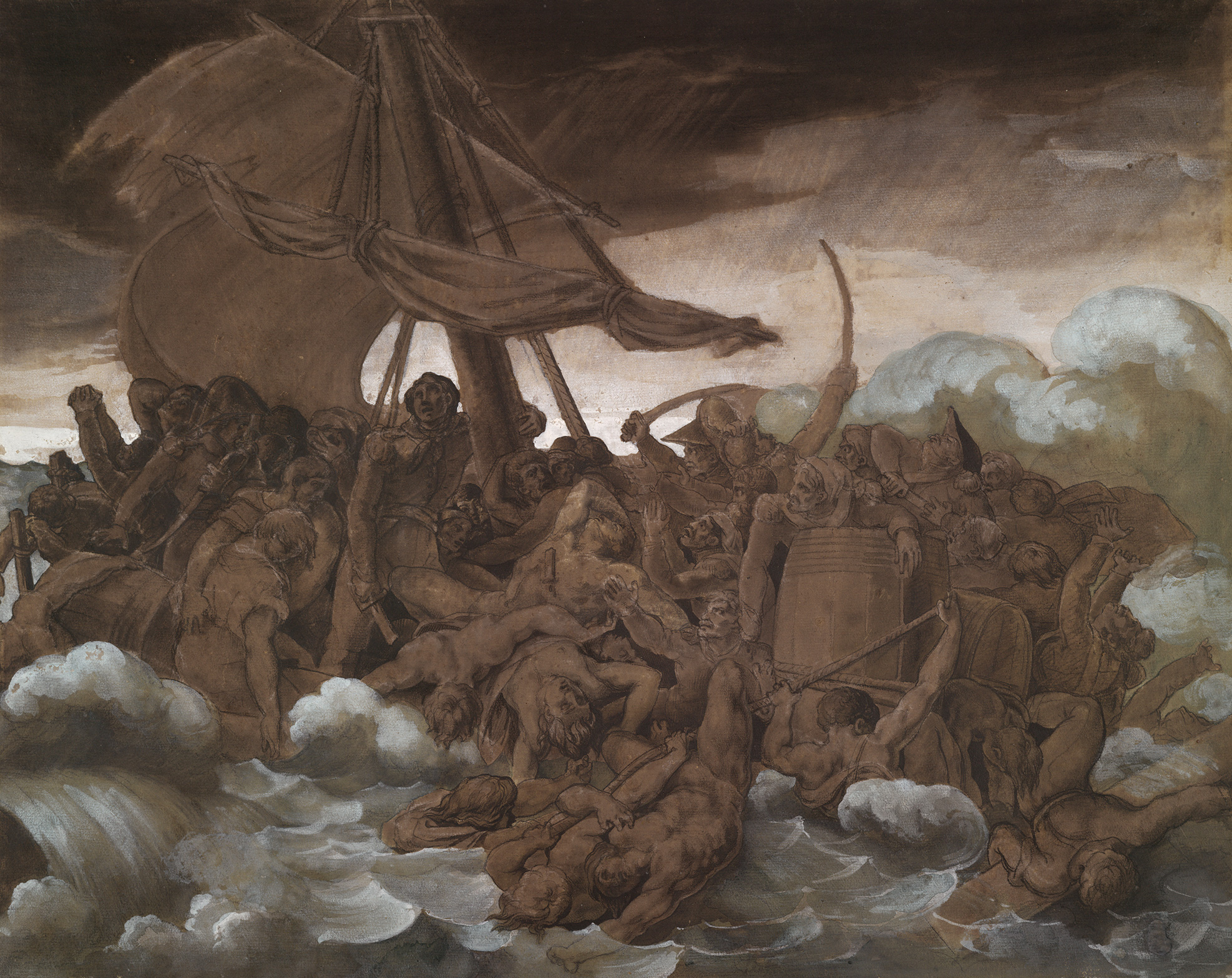 A few other gruesome subjects, including severed heads, dominate Géricault’s works from this period; they may or may not have been directly related to his preparations for The Raft. Géricault likely sketched his head studies from a macabre model of sorts: a decapitated head he obtained from a nearby hospital and allowed to decay on his roof.

Violence was a common theme for Géricault, and it sometimes involved animals, as in Cattle Market (1818–19). The colorful oil sketch on paper depicts men rounding up cattle for slaughter. Rendered as nudes, the figures recall Géricault’s classical education in Italy, but the landscape shown is decidedly the France of his time. In fact, new research by Jessie Park, the Rousseau Curatorial Fellow in European Art, has identified that the buildings depicted in this oil sketch were based on a slaughterhouse that opened in the neighborhood of Roule, located outside the then-city limits of Paris and just blocks from Géricault’s studio.

The setting figures so prominently in the composition that Park is convinced of the relationship between the actual site and the painting. “The buildings and the landscape take up more than half of the entire composition, which is not common for Géricault,” Park said. The work had long been dated 1817, with an accepted interpretation of the setting as a generic landscape or Roman countryside. Park’s findings enabled her to establish a new creation date of 1818–19.

The final section of the exhibition looks at how, late in life, Géricault oversaw the reproduction and republication of prints after some of his earlier compositions. One example is the White Horse Tavern lithograph produced in 1824 by Joseph Simon Volmar, after Géricault’s oil painting of the same name.

To some degree, Albinson said, Géricault embraced reproduction of his work by others (particularly younger artists) because he had become too ill to do so himself. He also hoped that the copies would help build his reputation and increase his renown.

If the enduring appeal of Géricault’s work is any indication, the artist certainly achieved his aims. The issues and subjects he addressed also remain strikingly relevant. As Albinson said, “Géricault’s work gives us a chance to consider the role of the artist in society and the artist as social commentator.”

Francesca Bewer, from the Harvard Art Museums, and Erin Muirhead McCarty, from Community Art Center, discuss their collaboration on a youth program last summer in Cambridge.