Over the past two years, the Harvard Art Museums have slowly been welcoming into the collection a blockbuster gift of 18 paintings produced in the Netherlands during the 17th century, a period in Dutch art history known as the Golden Age. The paintings were first promised to the museums in 2007 by notable Boston art collectors Peter and Anne Brooke, whose thoughtful collecting was fueled by a love of both art and the natural world. The couple also felt passionate about enhancing the teaching and learning experience for Harvard students.

Peter Brooke (Harvard A.B. ’52; M.B.A. ’54) is a past Overseer at the university, and his service garnered him the Harvard Medal, given by the Harvard Alumni Association, in 2002. His late wife Anne served on the university’s Committee to Visit the Art Museums, and she was a cherished member of the collections committee on paintings, sculpture, and decorative arts. The promised gift was especially meaningful to Anne, as Mr. Brooke recounted.

“Anne believed that [our] paintings, which so vividly portray everyday life in the Netherlands, should be available to Harvard students and the public at large,” he said.

The Brooke collection is crucial for the museums in several ways. The quality of the paintings, by artists such as Jan van der Heyden, Jan van Goyen, Aert van der Neer, Willem van Mieris, and Godfried Schalcken, among others, is uniformly high. And by the numbers, the Brooke gift represents the largest individual donation of European paintings to Harvard in the last 50 years. Ranging from still lifes and portraits to landscapes and everyday scenes, these 18 paintings have transformed the museums’ collection of Dutch and Flemish art.

Moreover, the promise of the Brooke gift was a harbinger of recent developments in the Boston art world. Last year the Harvard Art Museums were given more than 300 Netherlandish drawings, from the collection of Maida and George S. Abrams. Also in 2017, the Museum of Fine Arts, Boston, received a combined 113 Netherlandish paintings from Eijk and Rose-Marie van Otterloo and Matthew and Susan Weatherbie.

Thanks to these recent gifts, and building on the generosity of Peter and Anne Brooke, Boston is now the leading hub for research on Dutch and Flemish art in the United States, generating a new wave of interest in Netherlandish art and stimulating collaboration with other institutions. The Brooke gift is a critical component of these developments, offering students, scholars, and the general public more opportunities to learn about, explore, and appreciate Dutch and Flemish paintings of exceptional quality.

Currently, seven paintings from the Brooke gift are on view at Harvard, in the museums' Eijk and Rose-Marie van Otterloo Gallery (Room 2300). In the coming months, other paintings from the collection will be displayed. Highlights now on view include a still-life painting, a convivial interior scene, and landscape paintings. Read on for more details about these selected works.

Jan van Huysum II was the most admired floral still-life painter in the late 17th and early 18th centuries. In addition to depicting abundant bouquets that rise from classically inspired vases, he created more intimate paintings like Floral Still Life with Hollyhock and Marigold, shown above. Its simpler arrangement is contrasted with the dramatic interplay of light and shadow, set against a velvety dark background.

Beautifully executed, this still life includes flower species that originated in Asia (such as hollyhocks) and the Americas (marigolds). The painting encourages the viewer to appreciate every detail of the leaves, stems, blooms, and even the chipped edges of the stone tabletop, upon which a snail crawls. 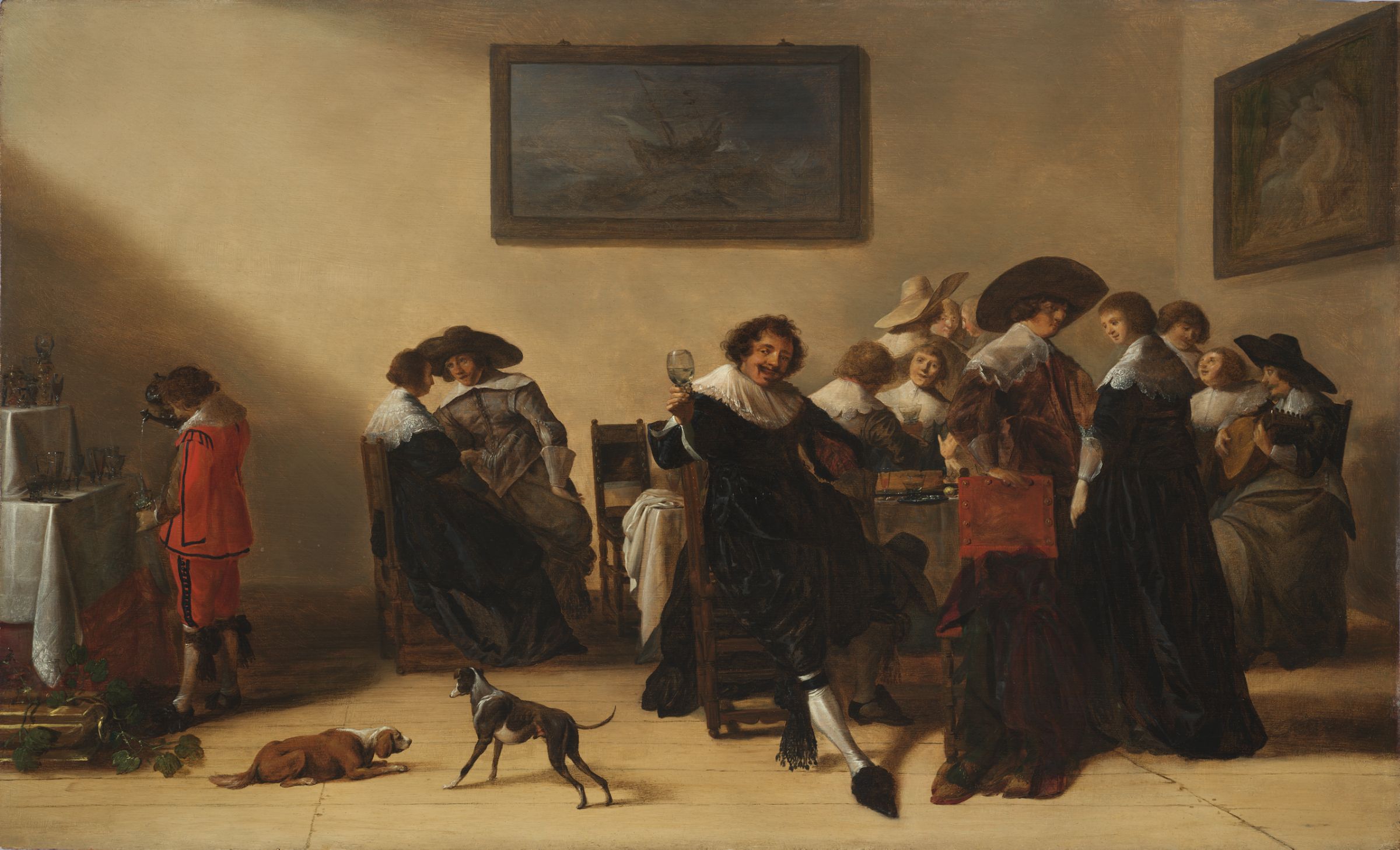 Merry Company in an Interior

Anthonie Palamedesz. was best known for paintings of elegantly dressed men and women at social gatherings. Merry Company in an Interior was produced in 1633, during the artist’s most successful period.

“The confidence and swagger of those in the village and tavern scenes gave me a vivid picture of why Holland accomplished what it did,” said Mr. Brooke, reminiscing recently about forming the collection. At the center of this painting, a seated bearded man raises a glass as if to invite us into this festive occasion, while a servant wearing a bright-red cloak pours more wine. Palamedesz. created a rhythmic composition by depicting the assembled company of men and women as alternately standing and sitting.

As is often the case with Netherlandish scenes of merry-making, this painting suggests a close link between drinking and flirtatious sociability. A marine painting of a ship run aground on a rocky shore, included on the back interior wall, might allude to the stormy course of love or the perils of a dissolute life—but its lesson in morality is resolutely ignored by the assorted “merry company.”

Just one of a wide variety of landscape paintings in the Brooke gift, Jan van Goyen’s masterful View of Rhenen stresses the city’s prominent position on a hill beside the Rhine. We see a Gothic church, municipal buildings, and windmills, silhouetted against the cloudy sky. The fishermen and a ferry filled with passengers in the foreground give a sense of Rhenen’s centrality to the local economy.

As evidenced by its harmonious palette of green, yellow, brown, and gray, this painting was created during the so-called tonal phase in Dutch landscape painting, from the late 1620s into the 1640s, when van Goyen’s influence was paramount.

Landscape with Peasants and a Washerwoman and Moonlit Estuary

Meticulously executed, the Brooke paintings not only encourage close-looking, but also address the issues of collecting and viewership in the 17th century. Likely intended for the home of a wealthy city dweller, David Teniers II’s Landscape with Peasants and a Washerwoman is a serene study executed with an economy of brushwork. It reflects contemporary attitudes about the countryside as a respite from the hustle-bustle of city life. Departing from his earlier satirical depictions of country life, here Teniers offers an idyllic scene of guileless peasants in harmony with nature.

Van der Neer’s Moonlit Estuary achieves spatial depth by depicting the zig-zaging shores of a river as it winds toward an estuary. Boats, cottages, and a church tower are silhouetted against a cloudy sky, where the colors change from an orangey-pink and light blue to a dark bluish-gray as the sun sets and the moon rises. Both the Teniers and the Van der Neer reflect the Brookes’ deep appreciation for paintings that are delicately scaled yet still have a strong visual impact.

Numerous visitors and students have already enjoyed the Brooke paintings, both on their own and thanks to a series of gallery talks given by curatorial fellow Jessie Park. And this semester, Adriaen van Ostade’s Three Peasants Drinking and Smoking, a circular tavern scene, is on display in the University Study Gallery for use by students in the History of Art and Architecture class Looking Back: The Western Tradition in Retrospect, co-taught by Jeffrey Hamburger, the Kuno Francke Professor of German Art and Culture; and Joseph Koerner, the Victor S. Thomas Professor of the History of Art and Architecture. We encourage you to come visit to see these remarkable paintings in person—and to recognize this important gift not only to Harvard but to the Boston area as a whole.

Jessie Park is the Rousseau Curatorial Fellow in European Art at the Harvard Art Museums.

A. Cassandra Albinson is the Margaret S. Winthrop Curator of European Art at the Harvard Art Museums. Harvard undergraduate Latinx students from María Luisa Parra-Velasco’s course Connecting with Communities course reflect on works in the Harvard Art Museums alongside their own personal and professional experiences.