At a moment when outdated social structures are being contested and many of us are seeking ways to dismantle them, how do we think differently about cherished objects that perpetuate patriarchy? One of many exclusionary systems, patriarchy maintains cis male dominance and limits the power of women, queer folx, and transgender people in business, government, and other social spheres. What, then, can the “President’s Chair,” a beloved historical object at Harvard, tell us about patriarchy? A lot, as it turns out.

“The Right to Kiss”

A 1903 article, printed in the Cambridge Chronicle, notes that: “The President’s Chair used to stand in the Harvard library, where, according to tradition, it gave a student the right to kiss any young woman whom he was showing through the college, and who thoughtlessly sat down on it. Whether or not the privilege was often or ever taken advantage of the present generation has no means of knowing.”[1] In an earlier account, a Harvard alumnus “delivered an 1811 poetic oration to Phi Beta Kappa that tells it exactly as it was: ‘Now young gallants allure their favorite fair to take a seat in Presidential chair; Then seize the long accustomed fee, the bliss of the half ravished, half free-granted kiss.’”[2] What was it about this piece of furniture that in some minds seemingly authorized men to violate women’s rights, and how do these anecdotes help us understand the chair’s past, present, and future?

The extraordinary piece of furniture that is currently known as the President’s Chair has been at Harvard since the mid-18th century. While art critic Robert Hughes once described this object as “ancient and weird”[3], the chair had no such connotations in its previous life. Made between 1550 and 1600 in England or Wales, this three-square turned chair, to use the proper terminology of furniture historians, is made of European ash, with later additions. Edward Holyoke, Harvard president from 1737 to 1769, had oak pommels attached to the front posts after he acquired it for the university.[4] With so many turned reels, rods, posts, and other details, the complexity of the design is striking. Upon closer look, however, one can see that the chair was roughly worked, not exquisitely crafted. Grooves on the two front legs appear asymmetrically placed and slightly unevenly spaced. Small rounded elements between the spindles of the chair’s back are of varying circular and oval shapes. Vertical roundels attached to the underside of the topmost spindle differ in length and width. The roughness of the work may indicate the chair’s original purpose for regular domestic use, the skill of the maker, or both.

As is to be expected with such a storied object of great fragility, some of the chair’s smaller components are now missing. The chair was already a rarity, especially in the New England colonies, when Holyoke brought it to Harvard during the mid-1700s. Though the style of chair had been out of fashion since the end of the 16th century, educated and affluent members of society valued it as an intricate artifact and document of history. When three-legged chairs appeared domestically in the mid- to late 16th century throughout rural England, they were often reserved for male heads of households. Ethan Lasser, former Theodore E. Stebbins, Jr., Curator of American Art at the Harvard Art Museums, reported these chairs were “probably made for the patriarch of a family; he would have been in this chair, and everyone else would have been in stools or benches.”[5] Curiously, this type of chair was thought to have “evolved from the triangular stools that were common throughout northern Europe in the Middle Ages,” which themselves may have evolved from stools known to have existed much earlier in ancient Egypt.[6] An example of a three-legged stool found in Egyptian Thebes can be seen at the British Museum, as can a three-legged table. While these examples from Dynasty 18 (1550–1295 BCE) are much different in appearance and context from the Harvard chair, they illustrate that three-legged furniture was certainly not a new form.

Three-legged chairs and stools had come to prominence in English universities such as Oxford and Cambridge, where they found ceremonial uses. Scholar Richard D. Ryder links “a three-legged stool on which a senior member of Cambridge University sat during debates with undergraduates” to Harvard’s chair, suggesting “the tripod had gained some prestige, at least among academics. Transatlantic evidence that this tradition continued is the three-legged turned chair used for several generations by the President of Harvard University in the conferring of degrees.”[7] Unfortunately, we do not know how the chair came into President Holyoke’s possession. An appendix in Harvard treasurer Samuel Atkins Eliot’s 1848 publication A Sketch of the History of Harvard College and of Its Present State references the President’s Chair in the inventories from around 1750. As an expert on turned chairs, Robert F. Trent posited that Holyoke saw the chair as “an imposing, ancient, and curious throne, suitable to the authority of the president and establishing an iconographic link between Harvard College and its late medieval English prototypes, Oxford and Cambridge.”[8]

The President’s Chair and the president of Harvard University at any given time have a distinctly indexical relationship. To this day, the chair is used as the literal seat of the president during inauguration ceremonies and yearly commencement exercises. Thus, the seat is activated at times when the president is coming into power as well as when granting degrees.

In its previous uses, on occasion, others were allowed to take a seat in the chair. On October 19, 1860, Harvard librarian John Langdon Sibley wrote in his private journal that Britain’s Prince Albert had visited Gore Hall (the former library), where he met many members of the Harvard board of governors as well as past and current presidents. Albert was pressed forward by President Felton into the President’s Chair.[9] That the prince, a figure of royal authority and a highly distinguished guest, was encouraged by President Felton to sit in the hallowed chair demonstrates its function as a symbol of authority as well as his typological relation to thrones past and present.

Returning to the anecdotal references recounted above, women are reported to have sat in the President’s Chair when it was housed in Gore Hall, sometime before the early 1900s. The “privilege” of male students to kiss their female guests, whether acted upon or not, illustrates a specific affordance of the President’s Chair—it granted male Harvard students the power to make advances toward their companions. Ironically, by imparting such power unto male sitters, the agency of female sitters was consequently arrested. Throughout its life at Harvard, the object has undoubtedly preserved processes of exclusion and furthered patriarchal norms.

Since being transferred into the Harvard Art Museums’ care in 1933, the President’s Chair has left storage for loan to three exhibitions, for occasional displays related to classes, and for inauguration and commencement ceremonies. Most recently, in order to draw attention to questions of gender and power raised by the work, curators of the 2011 multivenue exhibition Tangible Things borrowed the President’s Chair and placed it on view at the Radcliffe Institute’s Arthur and Elizabeth Schlesinger Library on the History of Women in America. The exhibition curators wrote that “as Harvard remained an exclusively male bastion (servants apart) for much of its existence, the President’s Chair assumed an identity as symbolic of expressly male authority. This changed only in 2007 with the installation of Drew Gilpin Faust as Harvard’s twenty-eighth president, the first woman to occupy the position.”[10] Faust served as president until 2018, holding the seat for 11 of the approximately 270 years the President’s Chair has been in use at Harvard. The decision to incorporate the President’s Chair into the exhibition and display it at Schlesinger Library offered a welcome possibility, casting a new light on a storied object and asking us to consider how we might honor tradition while also creating room for change.

At a time when long-accepted traditions are being reconsidered for the present moment, we should ask new questions. Only in recent years have we become keenly aware of the historically patriarchal use of the President’s Chair—and the fact that it cannot itself perpetuate bias. Instead, the chair’s symbolic significance and exclusionary agency are culturally constructed; this can and should be challenged. Must the ceremonial tradition of utilizing the chair for inauguration and commencement continue?

Because of the COVID-19 pandemic, Harvard’s 2020 commencement was virtual and did not feature the chair. I asked President Larry Bacow whether he missed the President’s Chair this year. While he acknowledged its historical importance to the university, he said “there are many things I missed about Commencement but candidly, the chair was not high among them.”[11] If continually employed ceremonially, how can patriarchal power be acknowledged and called out each time the President’s Chair is used for its traditional purposes?

Should the President’s Chair keep this name given that only one president to serve Harvard University to date has been a woman? Perhaps it should be called by its more general name, the Turned Great Chair. How could it then be activated in ways that evoke and empower more than a single Harvard president at a time? Dare we dedicate space to this chair for safe display and open a more public dialogue about the patriarchal (and other) questions it provokes, inviting feedback from all? New interpretations could help us find a more nuanced understanding of what an object like this can offer.

In that spirit, I would like to ask readers to share thoughts and ideas about this three-legged chair. What does it mean to you? Do you feel it perpetuates patriarchy or other outdated structures? Are you fond of it? Where does it belong and how should it be interpreted?

Heather Linton is curatorial assistant for special exhibitions and publications in the Division of European and American Art at the Harvard Art Museums.

[11] Lawrence Bacow (president of Harvard University), in email with the author, September 21, 2020. 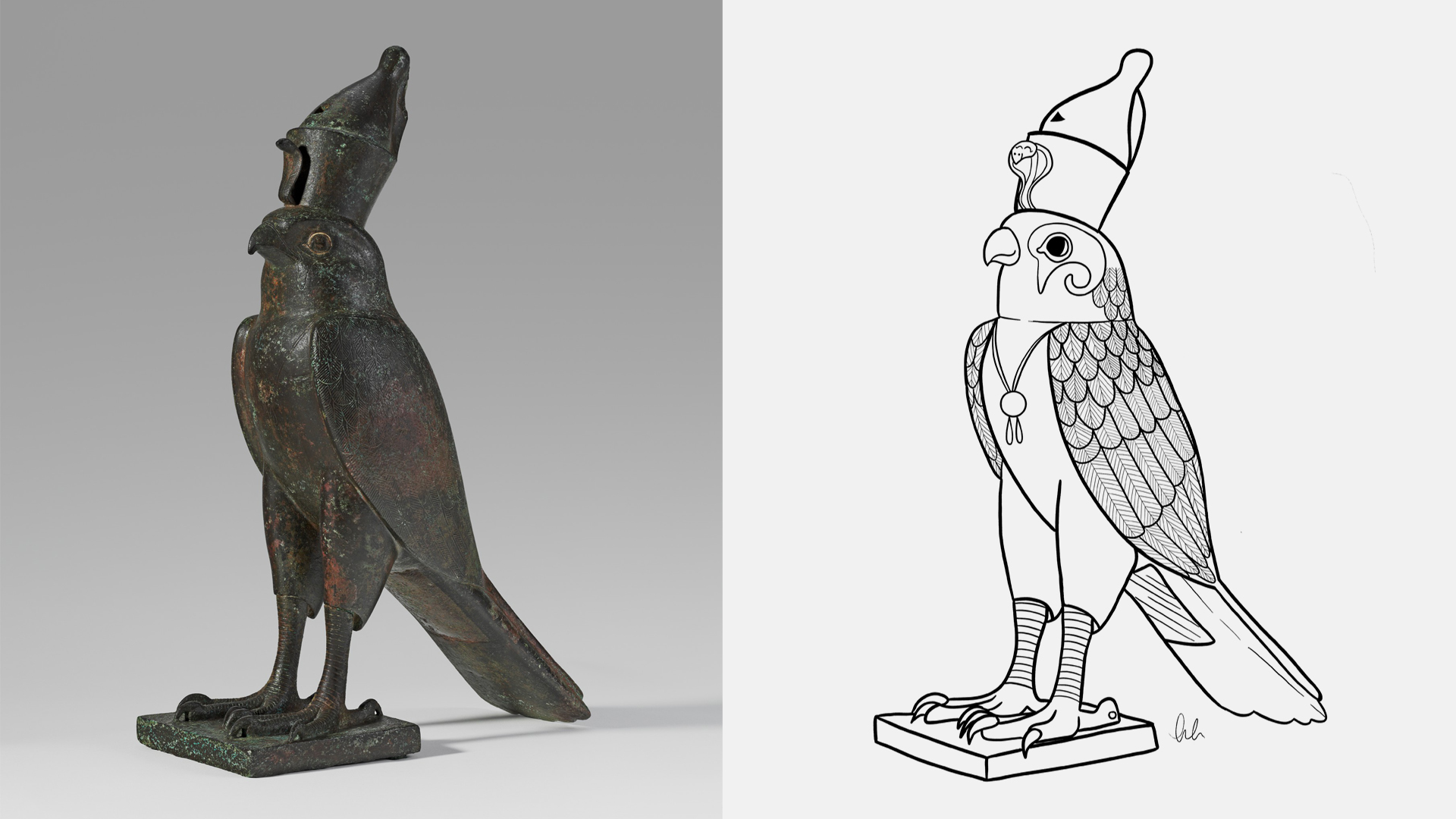 Join Egyptologist Jen Thum for a family-friendly, interactive look at animals from ancient Egypt, including a bronze bird and sunbathing snakes. 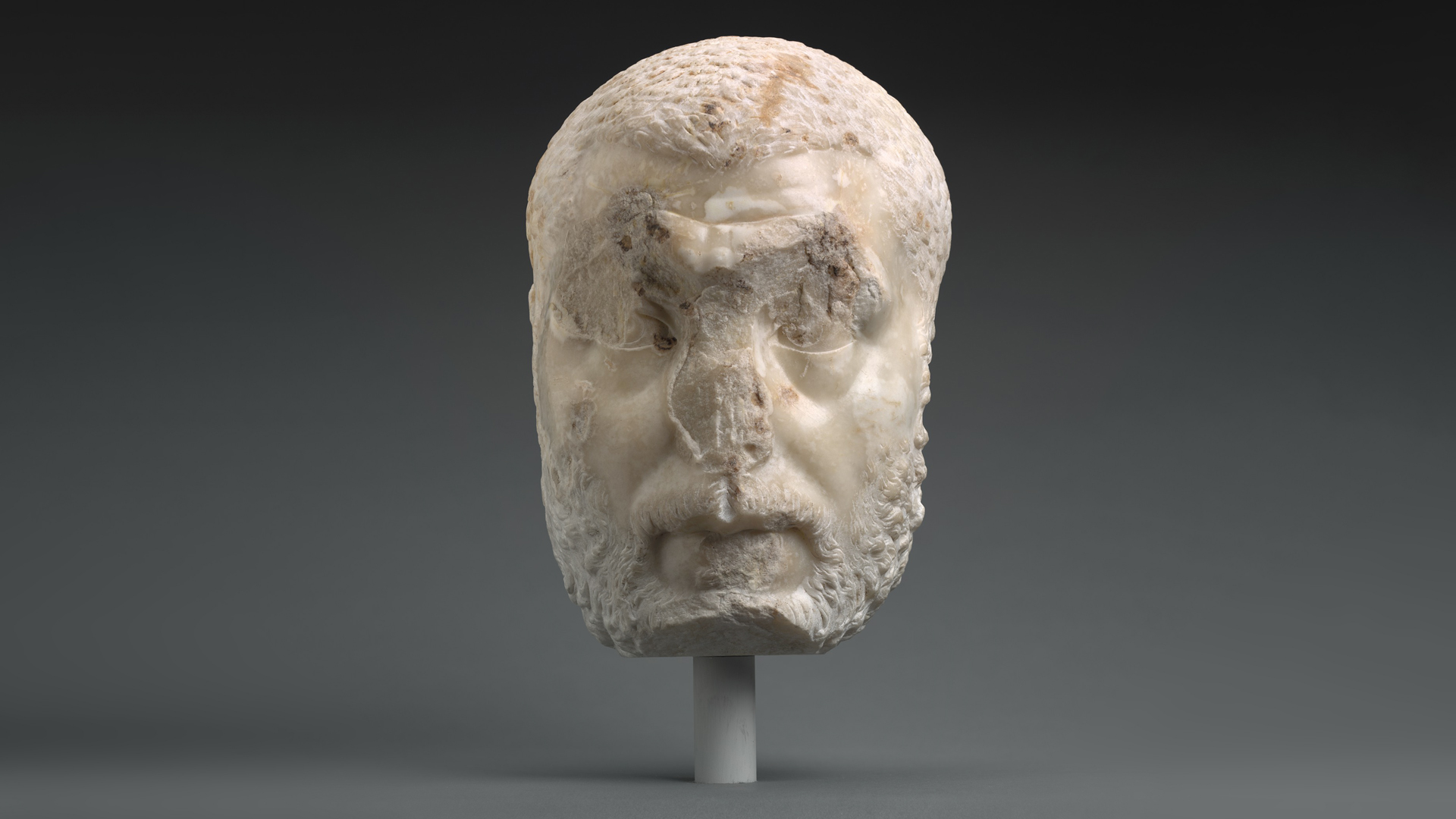 Throughout history, images of disgraced rulers were destroyed and their legacies erased from memory—or were they? Join curator Amy Brauer to learn more.