When it comes to popular ideas about ancient Italy, Romans often get the credit. But the ancient Etruscans, who lived in modern-day Tuscany and western Umbria, deserve our attention as well.

The fascinating culture that took hold in Etruria from the eighth through the first century BCE indeed cannot be overlooked, because its influence is widespread. “Etruscan culture has been such an integral part of material culture in Italy, from before the Renaissance until today,” said Theresa Huntsman, an Etruscan specialist and former publications data manager for the Archaeological Exploration of Sardis. She noted that we have the Etruscans to thank for revolutions in urban planning, for the enduring Italian appreciation of art and beauty, for some words in the modern Italian language (such as persona, which comes from the Etruscan phersu, meaning “mask”), and much more.

Major Etruscan settlements included Montepulciano, Italy, which happens to be home to the ecclesiastical complex that inspired our Calderwood Courtyard design. The Church of San Biagio in Montepulciano celebrates its 500th anniversary this fall, so to mark that occasion and the museums’ special relationship to the site, we’re tipping our hat to the rich legacy of Etruscan culture through a number of temporary gallery installations.

These installations were co-curated by Huntsman and Danielle Carrabino, former associate research curator in European art, who organized a suite of events, a digital tool, and a publication to honor the courtyard. This fall, about 70 objects from all three of our constituent museums’ collections will be on view. Each installation will explore a different facet of the Etruscans’ impact. They include:

The timing of these installations is staggered over a few months, but all four will be shown simultaneously from mid-October until mid-November. By way of our galleries, visitors will be able to take a journey through Etruscan—and Italian—history.

That these objects straddle not only galleries but also the three collections of the Fogg, Busch-Reisinger, and Arthur M. Sackler Museums presents a unique parallel to the Calderwood Courtyard itself, said Carrabino.

“The courtyard is the place where all three of our museums—and our visitors—come together,” she said. “It’s exciting that these installations allow our collections to speak more easily to one another, to showcase our museums’ strengths, and to highlight our collaborative work.”

One installation offers a glimpse into both ancient Etruscans’ lives and the “Etruscomania” that developed in 18th- and 19th-century Europe as archaeological expeditions unearthed Etruscan tombs.

Archaeologists discovered that banqueting was a common theme in the objects and wall paintings in these tombs. This installation includes eating and drinking vessels made of bucchero, a black glossy ceramic originating in Etruria that was fired in kilns and was left unpainted and unglazed. The shiny, burnished surfaces of bucchero wares were intended to resemble more expensive metals.

Another highlight is a watercolor by Prentice Duell, a Harvard scholar, artist, and archaeologist who visited Etruscan tombs at Tarquinia in the early 20th century. Duell’s work provides a view inside a 5th-century BCE painted tomb that contained banqueting vessels and implements.

The bright and colorful scene upends typical expectations of a final resting place. “You might think an Etruscan tomb would be somber,” Huntsman said, “but it’s more like a party. In fact, Etruscan tombs from this period were generally very colorful and lively.”

Duell also researched the pigments in Etruscan tomb paintings. His findings informed later researchers, including Carrabino and Huntsman, who selected an array of such pigments to show in the gallery. Drawn from the famed Forbes Pigment Collection, the examples include malachite, yellow ochre, and red ochre, which were found locally in Etruria. Egyptian blue was imported, which is “a testament to the Etruscans’ strong trade networks with other civilizations,” Huntsman said.

Etruscans have always been known as a people deeply invested in the arts, luxury, and beauty. The installation of Etruscan religious objects such as votive offerings, coins, fibulae (ancient safety pins), and figurines puts the skill of these ancient artisans on display. The objects also reflect the Etruscans’ religion, which focused on worship of the Greco-Roman pantheon of gods.

As Europeans later revived their interest in Etruscans, collecting such objects became popular. Michelangelo had a particularly rich collection of Etruscan art, some of which influenced his own creations. A drawing by one of his followers appears to share this interest, made in the style of reclining figures atop Etruscan cinerary urns.

Etruscan frieze designs left an impression on 18th-century artist Giovanni Battista Piranesi. He filled a page in his album Observations on the Letter of M. Mariette, which will be shown in Gallery 2240, with etchings inspired by architectural decorations at the ancient Etruscan settlement of Chiusi. Notably, his work also includes representations of Etruscan writing. 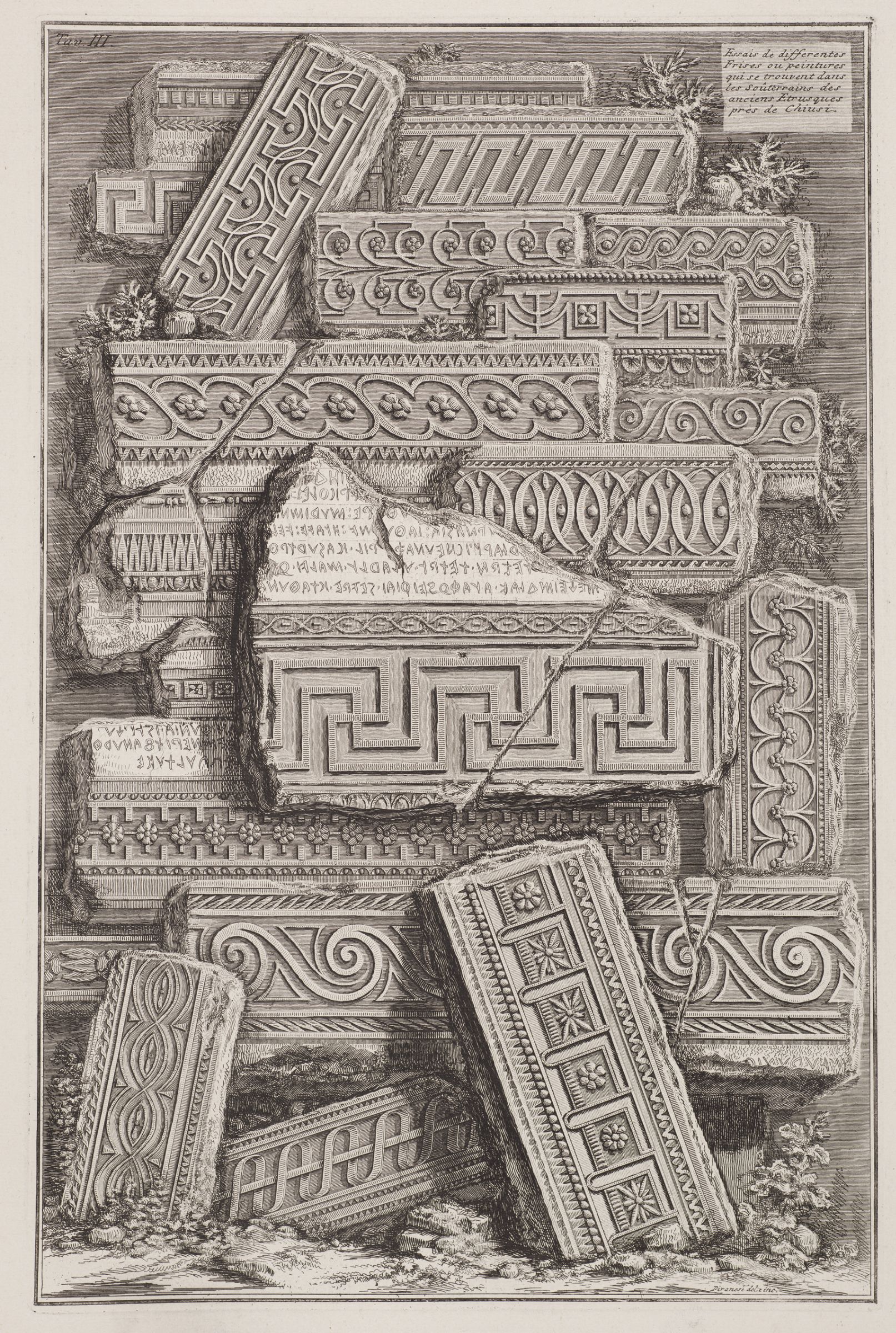 In Gallery 2700, another popular collecting interest will be on view: Etruscan jewelry and its revivals. Such finery attests to Etruscans’ skill in gem-carving, granulation (the application of tiny gold spheres to a surface), and filigree (delicate soldering of twisted gold threads). Roman jeweler Fortunato Pio Castellani (1794–1895) adopted some of these techniques, and helped spark a fervor in his era for such pieces. A student of Castellani’s may have created a stunning scarab necklace that incorporates both ancient scarabs (which sometimes were imported from Egypt and found in Etruria) and period imitations. The necklace is set in 19th-century gold filigree and includes fifteen scarabs; two rectangular cartouches; three small pendant scarabs; and one unidentified stone with hieroglyphics inscribed on the back; as well as more than a hundred freshwater pearls.

Other examples of Etruscan revival jewelry include an ornate filigree necklace and delicate hoop earrings with pearl and filigree, both of which originally belonged to Mrs. Elizabeth Fogg. (Fogg’s gift to Harvard established the William Hayes Fogg Museum, in her husband’s memory.) A drawing by Picasso makes an appearance as well: the young woman in this simple portrait wears a necklace with an Etruscan-inspired design.

The Busch-Reisinger Museum’s Franco-Flemish reliquary cross (c. 1350), like some religious objects in the Middle Ages, may have incorporated Etruscan gems into Christian contexts. “I find it remarkable that the re-use of ancient gems and scarabs was as much a practice in the Middle Ages as it was in the 19th and 20th centuries,” Carrabino said. “To me, that demonstrates how pervasive antiquity is in subsequent art; it has continued to be a touchstone throughout history.”

From Piranesi to Picasso, the Etruscan influence is to be found in surprising corners—it’s just a matter of looking deeper.