Archival materials can help us learn more about works of art in Harvard’s collections. The Portland Vase, made by the English manufacturer Josiah Wedgwood & Sons, is a fascinating case in point.

This jasperware vessel is the subject of correspondence between its donor, Grenville Lindall Winthrop (1864–1943), and Frederick Rathbone, the dealer from whom he acquired it. The letters between the two men allow us not only to appreciate how such transactions worked, but also to unearth the complex history and controversy surrounding the vase.

A prominent New York attorney and Harvard alumnus, Winthrop assembled a remarkable collection during his lifetime. Upon his death in 1943, the Harvard Art Museums received roughly 3,000 paintings, drawings, and decorative arts, more than 600 prints, and 5,000 books from the collection. The bequest was one of the most significant gifts of art made to the museums, then or since.

Winthrop’s legacy is even more impressive when we look at the range of artists and works that transformed the Fogg Museum’s collection: 20 works by Théodore Géricault, an extraordinary portrait of George Washington by Charles Willson Peale, and paintings by Jean-Auguste-Dominique Ingres, Eugène Delacroix, and William Blake, as well as a substantial number of early Chinese jades and bronzes. And these are just the tip of the iceberg: Winthrop’s collecting interests were vast, and his acquisitions were prolific.[1]

Relatively unknown still today are the roughly 100 examples of Wedgwood ceramics included in Winthrop’s gift. He acquired the Wedgwood objects early in his collecting career, and their scope is quite narrow—not at all encyclopedic and, as characterized in a 1947 source, reflective of “a ‘man’s taste.’ He ignored many categories such as table ware and concentrated on ornamental ware, that is, medallions, plaques and vases.”[2] Gender stereotypes aside, it is true that Winthrop preferred black basalt busts and jasperware portrait medallions over utilitarian objects. However, the most significant Wedgwood piece in Winthrop’s bequest is his Portland Vase. An original edition of the prized Wedgwood form, this highly decorative vase was displayed in his dining room.

Made of black jasperware, a type of stoneware invented by Josiah Wedgwood, Winthrop’s treasured vase replicates an ancient Roman cameo-glass vase from the time of Augustus (27 BCE–14 CE). That vessel once belonged to the Barberini family and was eventually acquired by the Duke of Portland. Widely reproduced in prints throughout the 18th century, it was revered for its ingenious use of material and its classical beauty.

Josiah Wedgwood spent years trying to perfect his replica, benefited by the Duke of Portland’s loan of the original object for modeling and comparison. Through a subscription, Wedgwood encouraged patrons to sign up to purchase a replica but gave himself no time limit on its completion. Once he achieved his goal, in 1790, he hosted ticketed viewings of the jasperware Portland Vase in his Greek Street showrooms.[3]

The ancient vase, now in the British Museum, is itself mysterious. Although there is no shortage of suggested readings, scholars are not sure what and whom the two scenes on the vase represent. Both mythological (Peleus and Thetis) and historical (Augustus and his mother, or Antony and Cleopatra) protagonists have been proposed. This uncertainty did not affect the popular appeal of the object, however. The Wedgwood manufactory produced the replica vase into the 20th century. For serious collectors, those made before Josiah Wedgwood’s death in 1795 are exceptionally desirable “first-editions.”[4]

“If I offer you too much you have the remedy by declining it!”

Most of Winthrop’s Wedgwood collection, if not all, was purchased through London dealer Frederick Rathbone, a specialist in “Old Wedgwood, Old English Pottery, Porcelain, and Bric-a-Brac.” Not much is known about Rathbone; he is described in a contemporary source as “the chief expert and judge, as well as the principal dealer in ‘Old Wedgwood,’ who has handled more specimens and made and catalogued more collections of the kind than any other man.”[5]

The Harvard Art Museums Archives contains robust and enlightening correspondence from Rathbone to Winthrop between 1910 and 1916, the relatively short time span in which Winthrop collected his Wedgwood. Rathbone offered various objects to Winthrop during this period, and as he put it to Winthrop early on, “If I offer you too much you have the remedy by declining it!”[6] While there are no copies of Winthrop’s replies to Rathbone, the letters he received from the dealer document the acquisition and provenance of most of the Winthrop Wedgwoods.

Beyond details related to the works, the correspondence also transports us to the early 20th century and conjures some of the major events of the period. In a letter dated April 26, 1912, Rathbone references “the ‘Titanic’ disaster,” noting that it is “still the chief topic in the papers.”[7] And on August 22, 1914, he writes: “Of course you are aware that many things have happened this month. We are now in for; I fear, a long war—one that was bound to come sometime—perhaps better now than later. But as one of your writers said, war at the best was Hades.”[8]

“This is a long letter. But a few words will answer it.”

Winthrop purchased his first edition Portland Vase from Rathbone in 1913. Rathbone initiated the acquisition with a letter to Winthrop on April 26, 1913: “I did not intend [to] trouble you about O[ld] W[edgwood] while you are on holiday. But as a piece has turned up I may never again have an opportunity of offering. I feel obliged to mention it for kind consideration.” Then, without yet mentioning the vase, Rathbone alludes to a highly sought-after object by suggesting that he will meet with other collectors unless Winthrop decides he wants the vase: “If you say you are of opinion you may like it—no one else will see it.”

Holding off on introducing the coveted vase, he finally does so with a flourish—a great reveal at the top of the next page of the letter: “The Portland or Barberini Vase one of the first fifty of quality and pedigree.” Among other details in the letter is an entire page devoted to the provenance of the vase, noting that it passed through his hands three times over the course of 37 years and that it was part of the collections of a Mrs. Winans, Sir Richard Tangye, and a third, unidentified collector. Rathbone goes on to suggest that the vase may have “belonged to one of the Darwins,” an attempt to elevate the object’s status. He presses on in his sell: “although called ‘1st fifty’ I doubt if in all the world there are 10 of equal quality. The fact was that Wedgwood found its production too costly.” Rathbone ends the letter dramatically: “This is a long letter. But a few words will answer it.”[9]

Rathbone’s letter accompanying the invoice for the sale of the vase, dated “Michaelmas 1913,”[10] fails to mention the pencil marks on the inside of the vase. Two inscriptions can be found on the inside lip; one reads “9,” the other “J. Trevor.” Winthrop seems to have eventually noticed the marks and inquired about their significance a couple of years later, in February 1915. In what appears to be a reply to a query from Winthrop, Rathbone states that he “never did take much notice of the pencil marks on the Portlands thinking they are simply warehouse or perhaps exhibition reference numbers.” He goes on to note that Winthrop’s must not be number six, as Rathbone knew of number six’s existence, adding defensively that “I judge quality or first-fifty from other points, material, workmanship, color, &c.”

Rathbone seems to be skeptical about the idea of pencil marks numbering the vases: “There is another point. From my old experience in print publishing at Agnews, &c. some particular subscribers stipulated for No. 2, 5, 7, or whatnot and it was a curious coincidence when the proof was delivered it always had the required number in pencil!” He returns to his speculation that Winthrop’s vase came from the Darwin family: “The first completed Portland was made in 1789 and sent to Dr. Darwin at Derby. What became of it I do not know, but it may be yours.”[11] Nevertheless, either because of his own curiosity or because he was trying to retain his customer, Rathbone ultimately agrees to follow up on the second pencil mark.

“She said it came from the Darwin collection. I want to know what branch of the family.”

Winthrop clearly didn’t let it go: in a letter dated March 30, 1915, in what appears to be a response to further queries by Winthrop, Rathbone confirms that he visited the British Museum to view its Wedgwood Portland Vase, citing its gray-hued jasper and affirming that “It simply cannot be ‘No I.’” He then reassures Winthrop that he is trying to track the “pedigree” of his vase from the firm that sold it to the previous owner, Mrs. Winans. Rathbone, still on the defense, states: “She said it came from the Darwin collection. I want to know what branch of the Darwin family . . . it is doubtful I shall succeed. . . . Will send on when I know more.”[12]

The investigation continued, culminating in a letter of April 27, 1915, in which Rathbone shares his new explanation for the pencil marks:

I understand Mr. Trevor was Mrs. Winans’ nephew. A young man who thought he was an art expert and as Mr. W. told me he did the negotiation with Phillips [the auction house] for her. He was just the man to have his name penciled upon the vase or write it himself—to be sure he had the right article. He knew a fresco from a fire plug but his art knowledge was limited [he] made so many mistakes, his aunt had to stop his efforts. His name does not carry one much further.

Rathbone, again, insists that Winthrop’s vase is the very first edition and descended through the Wedgwood-Darwin family: “I still think your vase is the first completed copy, that Dr. Darwin had and I hope yet to certify that if possible.”[13]

Despite Rathbone’s repeated connection to the Darwins and, by default, the Wedgwood family itself, we know he was likely wrong. Jean Gorley and Mary Wadsworth, in their 1944 catalogue of the Fogg Museum exhibition Old Wedgwood from the Bequest of Grenville Lindall Winthrop, identify Trevor not as a foppish young man, but on the basis of archival materials suggest that Trevor refers to the first purchaser of the vase: “His Excl John Trevor” appears on the list of original subscribers, along with “H.R.H. P. of Wales,” “Lord Auckland,” and “D of Marlborough,” among others.[14] Gorley and Wadsworth note that Trevor received the vase on December 22, 1797, and paid for it on February 12, 1799.[15] They found no evidence indicating that the vase was ever part of either the Darwin or Wedgwood family collection, and our only suggestion to that end comes from Rathbone, an unreliable source.

The archival discovery solves Winthrop and Rathbone’s dispute and, in a way, validates them both. Winthrop’s Portland Vase is a first edition, and the inscriptions are an important part of its history.

Casey Kane Monahan is the Cunningham Curatorial Assistant for the Collection in the Division of European and American Art at the Harvard Art Museums.

Art historian Felipe Pereda and conservator Tony Sigel propose new evidence to identify the sitters and the sculptor for a pair of unusual Renaissance terracotta busts. 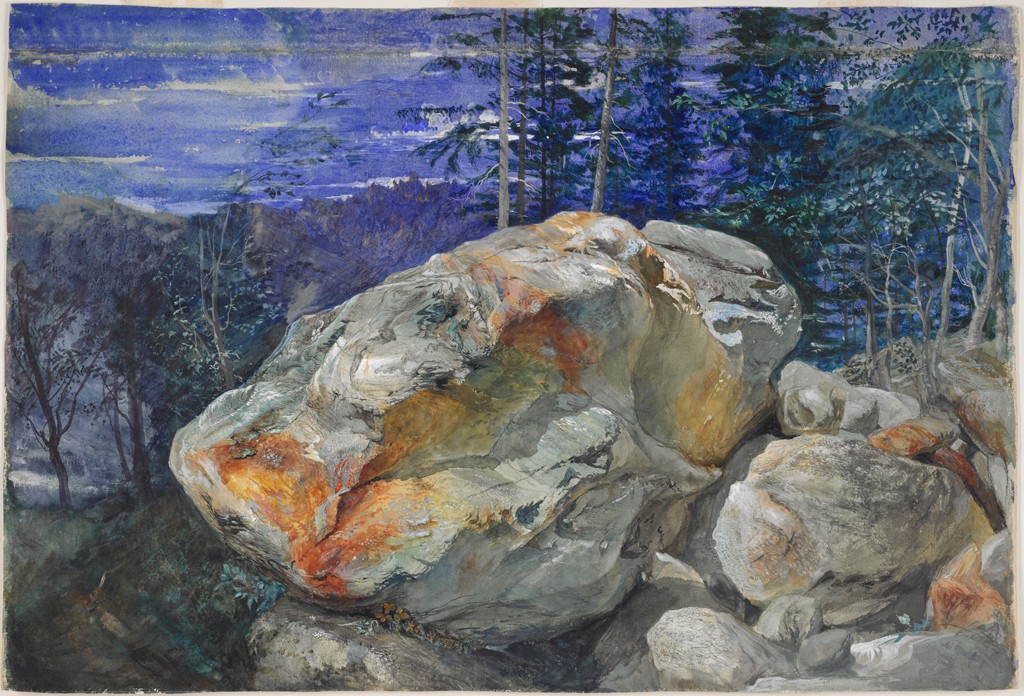 The Fogg at 125: An American Pre-Raphaelite Legacy

Explore the long-lasting legacy of the 19th-century American Pre-Raphaelite painters at the Fogg Museum, as we celebrate its 125th anniversary.