Recently it seems that we’ve been swept down the rabbit hole and through the looking glass into a strangely upside down and backward world.

These figures of speech from Lewis Carroll’s beloved books Alice’s Adventures in Wonderland (1865) and Through the Looking-Glass and What Alice Found There (1872) still resonate today, especially as we navigate unsettling times. The books’ indelible illustrations by John Tenniel (1820–1914) and subsequent attempts by his younger American counterpart, Peter Newell (1862–1924), are no less powerful. Indeed, Newell’s original drawings for Alice are among the most endearing works in the Harvard Art Museums collections. While Tenniel established the enduring visual identity for Alice and her companions, Newell reinvented Wonderland by exploiting advances in technology.

The relationship between text and image was foundational to Carroll’s creative expression from the start. The author had attempted to illustrate Alice’s Adventures in Wonderland himself but lamented that his drawings were too “crude.” In 1864, he engaged Tenniel, a prolific artist-illustrator whose anthropomorphic animals must have appealed to Carroll—his cartoons appeared frequently in the satirical magazine Punch, and he had illustrated a 19th-century edition of Aesop’s Fables. The manuscript for Alice did not provide extensive descriptions of the settings or characters, allowing Tenniel to create his own peculiar kingdom: “If you don’t know what a Gryphon is,” Carroll advised his readers, “look at the picture.”[1]

Tenniel’s Alice illustrations were produced as black-and-white wood engravings. His original graphite drawings were transferred onto woodblocks, which were in turn cut by professional engravers. At the time, wood engraving was the prevailing technique for illustration, and practitioners learned how to exploit the fine lines and often minute scale of the images so that their illustrations would be both legible and expressive of the text. Poet Austin Dobson celebrated the serendipitous marriage of Carroll’s text and Tenniel’s illustrations for Alice in 1907:

Enchanting Alice! Black-and-white
Has made your charm perennial;
And nought save “Chaos and old Night”
Can part you now from Tenniel.[2]

In 1901, Harper & Brothers published an American edition of Alice’s Adventures in Wonderland with Newell’s illustrations. Like Tenniel, Newell was a professional illustrator, whose work appeared in popular magazines like Harper’s, Scribner’s, and St. Nicholas. Newell, who also illustrated Through the Looking-Glass and What Alice Found There (1902), later published inventively shaped and conceived books like The Hole Book, The Slant Book, and The Rocket Book. As a child, I was captivated by my grandfather’s copy of The Hole Book.

When the book first appeared, critics were guardedly supportive of Newell’s Alice illustrations. The New York Times conceded that although “the Tenniel pictures used to be thought inseparable from the text,” Alice and “her strange associates are refreshing and interpretive in a new way.”[3] Newell himself admitted that Tenniel’s “appreciation of the many grotesque personages peopling this wonderland are sympathetic, and his work will live as long as Alice. It may appear presumptuous therefore on my part to portray what Alice means to me.”[4] But despite the artist’s reservations, he was able to apply his own brand of whimsy and humor to this most sacred of texts, bringing a kind of domesticated Wonderland home to America.

The Harvard Art Museums own five of Newell’s drawings for the Alice books that were reproduced in halftone, a photomechanical process that replaced wood engraving in publications and significantly changed the illustrator’s craft. Rather than being translated through an intermediary, as in wood engraving, Newell’s original drawings could be reproduced photographically. In order to take best advantage of the halftone process, which uses a screen of closely spaced dots to render graduated tones in gray, Newell used muted colors in opaque and transparent watercolor. His illustrations—printed on yellow paper—have a softer, more lush appearance than Tenniel’s linear wood engravings. The three-dimensional shadings allowed by the process further animate the settings.

Newell set his Alice illustrations in a universe already familiar to us from Tenniel’s illustrations. The characters are immediately recognizable, and some appear to be gently inflated versions of Tenniel’s originals. Two of Newell’s illustrations in our collections are for the poem “You Are Old, Father William,” which appears in the chapter “Advice from a Caterpillar.” The poem is Alice’s attempt to recite Robert Southey’s didactic poem “The Old Man’s Comforts and How He Gained Them” (1799), but like everything in Wonderland, the words emerge askew. In the original poem, Father William piously reflects on the pleasures of his youth, but in Alice’s version, he performs outlandish stunts, including vaulting through the door and posing with an eel.

Newell has taken Tenniel’s view of Father William’s acrobatic entrance, in which his antics are seen from the side, and turned it so that Father William seems in danger of tumbling into our very space.

Father William’s upended posture is reminiscent of Newell’s ingenious illustrations in Topsys & Turvys (1893–94), which could be read both right side up and upside down.

Through the Looking-Glass and What Alice Found There, 1902

Newell made careful preliminary studies in pencil, like the study above for the characters Hatta and Haigha, and then transferred the composition to another sheet, which would in turn be worked up in ink and watercolor. Here, he roughly sketched in the right side of the White King, which is cut off in the final illustration. It is clear from both Tenniel’s and Newell’s illustrations that the White King’s messengers, Hatta and Haigha, are the Mad Hatter and the March Hare from Alice’s Adventures in Wonderland. Carroll makes this explicit by using the name Hatta (hatter) and stating that Haigha is pronounced to rhyme with “mayor” (“hay-or,” or hare).

According to Newell, “An illustrator should be fully familiar with the story for which he is making the pictures. . . . Accuracy in the representation of characters in fiction is an important part of an illustrator’s equipment.”[5] How best, then, to depict Carroll’s mythical creatures? Here we see that Newell manages to render a unicorn—an unusually special and elusive creature—so that he appears to be a comfortable everyman, waiting for a slice of plum cake with his hands in his pockets. The White King explains to Alice that the lion and the unicorn are fighting for the “crown.” He ruefully adds that “the best of the joke is, that it’s my crown all the while!” The lion (England) and the unicorn (Scotland) have long been part of Britain’s coat of arms.

Newell’s dark-haired daughter Josephine was the model for Alice. While Alice’s long hair and pinafore recall Tenniel’s character, Newell’s Alice seems younger, exhibiting the slightly petulant and elastic expressions of a seven-year old compared to Tenniel’s severe small figure who appears to verge on adulthood. The two somnolent queens could be anyone’s friendly (or fearsome) aunts.

In both of the Alice books, Newell’s illustrations invoke a comfortable domesticity—a more homely version of magical realms. He was able to mingle the fantastic with the familiar, while maintaining a true sense of wonder that would fit snugly by the nursery fire. Discovering Newell’s charming illustrations for such well-known territories as Wonderland and Looking-Glass World allows us to revisit our own childhood landscapes.

Newell’s illustrations for the Alice books were given to Harvard in 1929 by Philip Hofer, the founder and first curator of the Department of Printing and Graphic Arts at Harvard’s Houghton Library, and at one time secretary of the Fogg Art Museum. Hofer acquired many of Newell’s drawings for illustration from the artist’s widow, many of which are housed at Houghton Library[6]. The group includes four additional drawings by Newell for Alice.

Houghton is also the repository of the Harcourt Amory collection of Lewis Carroll, which includes preparatory drawings for Alice by John Tenniel. In 2015, Houghton mounted the exhibition Such a Curious Dream!, in celebration of the 150th anniversary of the publication of Alice’s Adventures in Wonderland.

Miriam Stewart is curator of the collection in the Division of European and American Art.

[5] Martin Gardner, More Annotated Alice: Alice’s Adventures in Wonderland and Through the Looking-Glass and What Alice Found There (New York: Random House, 1990), xxvi. 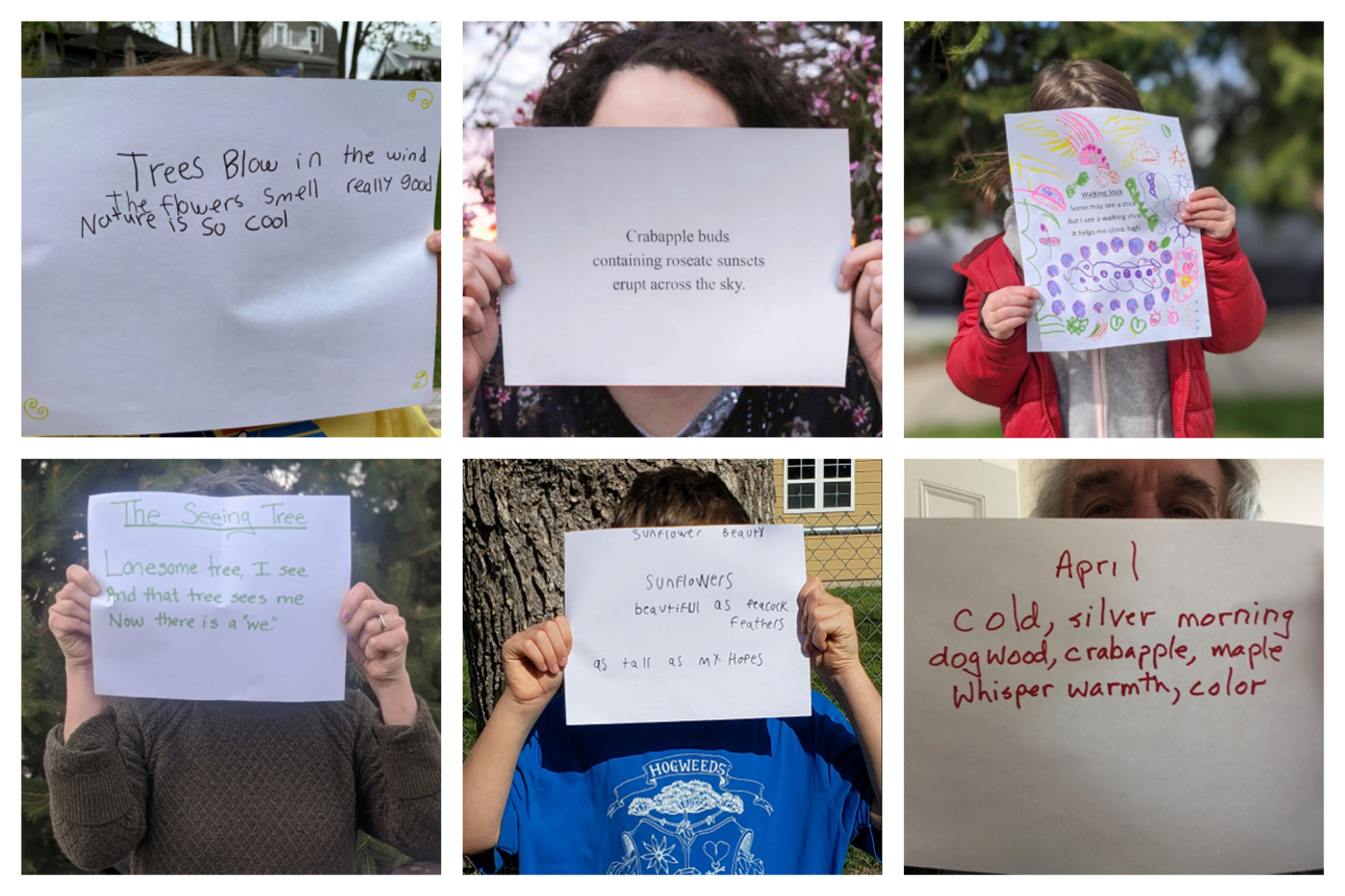 Haiku and You: Painting Edo and the Arnold Arboretum

Learn about haiku in the Edo period and explore haiku as a creative practice, inspired by the Arnold Arboretum and the Painting Edo exhibition.