Trained as a glazier in his hometown of ’s‑Hertogenbosch, Abraham van Diepenbeeck enrolled as a master glass painter in the Antwerp Guild of Saint Luke in 1622–23 and later in the decade worked as an assistant in the workshop of Peter Paul Rubens. In addition to fulfilling commissions for historiated windows in Antwerp, Diepenbeeck painted portraits, as well as biblical and mythological subjects in oils. During the last twenty years of his life, he also designed several series of tapestries.1 Throughout his career, he turned out drawings and oil sketches that served as models for graphic works of every kind—title pages, book illustrations, thesis prints, and single plates with portraits and religious or literary themes. The nearly five hundred compositions engraved after his designs not only established his reputation during his lifetime, but sustained it posthumously. The majority of his drawings, of which hundreds survive, relate to prints produced by Antwerp engravers and publishers.2

The British Dominican historian Father Simon Tugwell first recognized the subject of the Harvard drawing as the fourteenth-century Swabian mystic Henry Suso (a.k.a. Heinrich Seuse, born Heinrich von Berg; Überlingen 1295/97–1366 Ulm).3 The work was certainly intended to serve as the model for an engraving. The principal contours of the composition were incised to transfer the design to a copper plate and, anticipating the reversal of the letters when the image was printed, ETERNITAS was inscribed counterclockwise around the head of the figure of Divine Wisdom, and Jesus’s monogram, IHS, was written backward over Suso’s heart. A closely related drawing by Diepenbeeck in the Noordbrabants Museum, ’s‑Hertogenbosch, represents Saint Thomas Aquinas Receiving the Chastity Girdle from the Virgin Mary (Fig. 1).4 The two compositions—which are virtually identical in their media, techniques, and dimensions, share the same provenance, and depict venerated Dominicans—were clearly intended as models for a pair or series of prints.5 An engraving by Cornelis Galle I after the drawing in the Noordbrabants Museum has been identified. It is dedicated to Christiaan Roelofs, who served from 1637 to 1657 as abbot of the Norbertine monastery of Saints Cornelius and Ciprianus in Ninove in East Flanders.6 The Harvard design was presumably also engraved, but an impression has not yet been located.

Images of Suso that predate the Harvard work are rare. Diepenbeeck must have known the engraving by an unidentified artist in a life of the mystic written by a Dominican, Father Joannes van Horenbeeck, and published in ’s‑Hertogenbosch in 1627 (Fig. 2).7 That frontispiece must have served as Diepenbeeck’s point of departure for his figure, while Horenbeeck’s text could have provided the literary source for the elaborate iconography of his composition.

Suso’s life and theological ideas are well documented in his spiritual autobiography, Life of the Servant, and other writings.8 In the Life, he describes the vision that sealed his mystical union with his “bride,” Eternal Wisdom, whom he identified with God. She appeared to him seated on an ivory throne that rested “on a cloud like a pillar,” clothed in light, and “with eternity as her crown.” In Diepenbeeck’s drawing, a cloud supported by both classical and Solomonic columns serves as the base for her throne, and, as noted above, ETERNITAS is inscribed around her head. In Suso’s text, she addresses him lovingly, saying, “Son, give me your heart.” Suso “bowed down at her feet and thanked her warmly with a humble heart.”9 The pathos of his gesture and facial expression in the drawing reflects the artist’s debt to the emotionally charged religious art of Anthony van Dyck’s second Antwerp period (1627–32).10 Suso wears the crown of white and red roses that was revealed as his attribute in a vision experienced by one of his followers: “The white roses mean his purity and the red roses his patience in the manifold sufferings he must endure.”11

Some of those sufferings were self-inflicted, and Diepenbeeck includes several references to practices Suso devised to mortify his flesh. Hovering cherubs display his nail-studded undergarment, a whip, shackles, and the cross bristling with thirty nails that Suso wore beneath his habit and with which he regularly beat himself. At night, he wore the heavy gloves that rest on the floor in front of him. Fitted on the inside with sharp tacks, they prevented him from scratching his body in his sleep.12 As a sign of his love and “eternal friendship” with God, he used his writing stylus to carve the monogram of Jesus into the flesh on his chest,13 and Diepenbeeck drew rays of white opaque watercolor to signify the bonds of Suso’s heart with the Name of Jesus and Eternal Wisdom. Other cherubs hold a rosary (an essential accessory of Dominican piety) and a sheet with musical notation—probably an allusion to the divine choirs that consoled the suffering mystic in several of his visions. Finally, the dog shaking a piece of old cloth in his mouth refers to a mundane incident that Suso interpreted as a divine warning about his enemies within the Order.14

3 Email correspondence between Susan Anderson, Colin Fenn, Sir Swinton Thomas, and Father Timothy Radcliffe, who showed the image to Father Tugwell, 14–16 August 2013. My thanks to all of them for their help in identifying the subject of the drawing. In the catalogue of the sale, Sotheby’s, London, 5 July 2013, lot 349, the subject was identified as Saint Dominic kneeling before a personification of the Church.

5 In their pictorially finished technique, with the detailed pen work added at the end, atop the layers of wash, both drawings resemble the models prepared by Rubens’s workshop assistants for the printmakers who reproduced the master’s paintings. See Carl Depauw in Carl Depauw and Ger Luijten, Anthony van Dyck as a Printmaker (Antwerp: Plantin-Moretus Museum and Stedelijk Prentenkabinet; Amsterdam: Rijksmuseum, Rijksprentenkabinet, 1999), pp. 43–71, who illustrates several examples attributed to Van Dyck that are similar in media and technique to the Harvard and ’s‑Hertogenbosch drawings, such as p. 47, figs. 8 and 9, and cat. 2, pp. 60–63. It is likely that Diepenbeeck himself executed drawings of this type while an assistant in the Rubens workshop.

6 Vlieghe in Janssen et al., cat. 32, pp. 58, 61, and 79, repr. fig. 31. My thanks to Paul Huys Janssen of the Noordbrabants Museum for information about the Saint Dominic drawing and the related print (email correspondence, 7 November 2013). 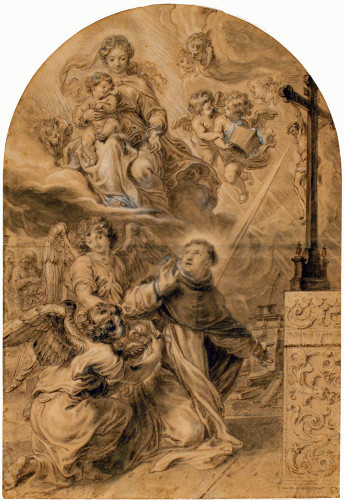 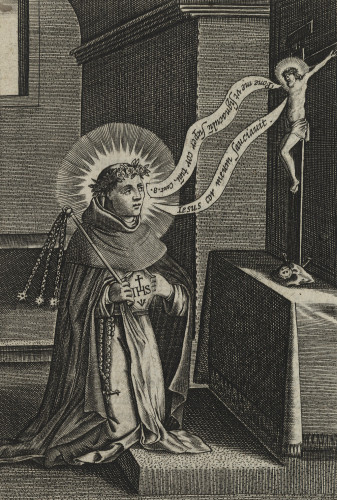 Stijn Alsteens, [Review] William W. Robinson, with Susan Anderson, "Drawings from the Age of Bruegel, Rubens, and Rembrandt: Highlights from the Collection of the Harvard Art Museums" (Winter 2015), p. 532, repr. p. 532 as fig. 2