The forty-four etchings known as the “Small Landscapes” appeared in two suites, dated 1559 and 1561.1 As advertised in the title of the 1559 set, they depict “various cottages, farms, fields, roads, and the like, ornamented with animals of all sorts. All portrayed from life, and mostly situated in the country near Antwerp.”2 In contrast to the “world landscapes” represented by most sixteenth-century Netherlandish landscapists (1999.132), with their high horizons and imaginary, composite scenery, these innovative prints show intimate views of the local countryside based (as the title claims) on studies from life. They anticipate by more than fifty years the naturalistic approach developed by seventeenth-century Dutch artists.3

The Antwerp publisher Hieronymus Cock brought out both series, but neither the printmaker nor the designer is identified in the early editions. Most authorities accept the attribution of the etchings to the brothers Joannes and Lucas van Doetecum,4 but no consensus has developed around the authorship of the related drawings. An edition issued in 1601 named Cornelis Cort as designer, while Claes Jansz. Visscher, who etched copies of the Small Landscapes in 1612, ascribed the original compositions to Pieter Bruegel the Elder. Twentieth-century art historians introduced several candidates, in addition to Cort and Bruegel, but none presented a conclusive identification of the draftsman.5

Twelve drawings that served as direct models for prints in the two series have survived.6 Executed primarily in brown ink, most were completed in two campaigns, with the figures, animals, and all or part of the foreground added in darker ink than the buildings and trees that comprise the main features of the composition.7 Eight drawings of similar dimensions and handling belong to the group, but were not reproduced as prints.8 Some of those were also finished in darker ink.9 Reinhard Liess, who devoted an exhaustive study to the Small Landscapes, attributed the first states of the drawings to two distinct hands.10 The additions in darker ink—where they appear—are in most cases by a third draftsman, who completed the landscapes before the Van Doetecums etched them.11

Women Bleaching Linen Near a Walled Town was not reproduced as an etching in either series of Small Landscapes. Before it came to light in 1981, an identical version in the Gabinetto Disegni e Stampe degli Uffizi, Florence, passed as the original of this composition.12 Liess, who knew the Harvard work only from a photograph, regarded it as a copy or replica of the Uffizi drawing.13 However, the primacy of the Harvard sheet seems indisputable. Most importantly, its production followed the same sequence as most drawings in the group: the walls and buildings were studied—presumably on site—in a lighter brown ink, while the bleaching field and staffage were added in a darker tone. Examination with infrared light distinguishes the separate campaigns (Fig. 1).14 That a copyist would have proceeded in two stages, with different inks, is unlikely. The Uffizi version was completed in a single campaign, using only one ink.15 Furthermore, the Harvard sheet belonged to the same early collection as at least four other drawings in the group. The (seventeenth-century?) hand that wrote the number 52 in the upper right corner also numbered two sheets at Chatsworth and one each in Berlin and the Fitzwilliam Museum, Cambridge.16 The numeration must predate the acquisition of the Chatsworth drawings by the Devonshire family, probably in the first quarter of the eighteenth century.17 The handling of the figures and foreground in the Harvard sheet is by the same hand as in two drawings at Chatsworth, in which architectural views also dominate the backgrounds.18

The site represented in the drawing has not been identified.

10 Liess, pp. 12–15. Liess attributed one group (his Group A) to Pieter Bruegel the Elder and another group (his Group B) to Cornelis Cort. Neither attribution is convincing, but his observation that two different draftsmen produced the first states of the models for the prints was an important step.

13 Reinhard Liess, “Die Kleinen Landschaften Pieter Bruegels d. Ä. im Lichte seines Gesamtwerk,” Kunsthistorisches Jahrbuch Graz, vol. 18, no. 3 (1982), pp. 159–60, and Reinhard Liess, Jan Vermeer van Delft, Pieter Bruegel d. Ä., Rogier van der Weyden: Drei Studien zur niederländischen Kunst (Göttingen, 2004), p. 65. Liess acknowledged that Konrad Oberhuber and Egbert Haverkamp-Begemann accepted the Harvard drawing as the original, but he argued that the draftsmanship was copylike, and the handling of the Uffizi version was superior. In my view, the execution of the Harvard drawing is more characteristic of the Small Landscapes. Manfred Sellink in Orenstein, cat. 135, accepts the Harvard drawing as by the Master of the Small Landscapes, as does Ger Luijten in Kloek and Meijer, cat. 15, pp. 28–30.

14 That the inks behave differently when examined with varying wavelengths of infrared (IR) light reveals that the drawing was done with two distinct inks. In this case, the ink in the upper portion of the drawing disappears relatively quickly when we move through the IR spectrum, and that of the lower portion remains visible longer.

17 Although the acquisition date of the Chatsworth drawings—Liess’s nos. A2 and B1 (see n. 16)—is undocumented, they were probably acquired by the Second Duke of Devonshire (1665–1729) and have since remained at Chatsworth. 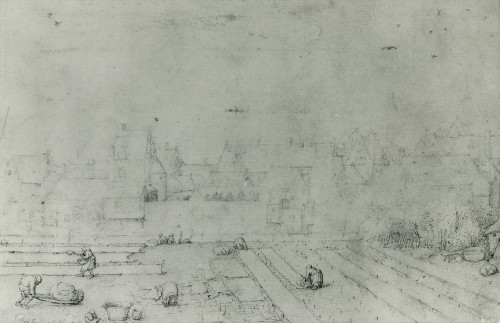 Karel G. Boon, The Netherlandish and German Drawings of the XVth and XVIth Centuries of the Frits Lugt Collection (Paris, France, 1992), p. 91 (n. 13)