The Haarlem master Maarten van Heemskerck had a long and successful career as a painter of altarpieces—some on a monumental scale—and other religious pictures, as well as portraits and mythological scenes. More than one hundred paintings are known. He initially adopted the style of Jan van Scorel, with whom he worked in the late 1520s. After a long sojourn in Italy (1532–1536/37), where he studied the art of Michelangelo and Giulio Romano and drew after ancient sculpture and architecture, Heemskerck developed the more dynamic Italianate manner that he practiced for the rest of his life.

Hardly less significant than Heemskerck’s achievement as a painter is the oeuvre of six hundred prints made from his designs.1 A few are after paintings, but the vast majority reproduce detailed pen-and-ink compositions, of which Giving Drink to the Thirsty is a fine example. Hundreds of these drawings have survived. Neatly executed with clearly defined contours and sharp, distinct parallel lines and cross-hatchings for shading, they provided easily translatable models for the specialist engravers who copied them onto copper plates. The first of his collaborators was the printmaker and moral philosopher Dirck Volkertsz. Coornhert, with whom Heemskerck worked from 1548 to 1559. Initially, they probably co-published their prints in Haarlem, but from 1553 onward, most were issued in Antwerp by Hieronymus Cock and marketed there by Cock and the printer/publisher Christoffel Plantijn.2 Later, Philips Galle, among others, engraved Van Heemskerck’s compositions, which he continued to design into the 1570s. Many were produced in series, including Old and New Testament narrative cycles, devotional imagery, mythological scenes, and allegorical subjects.3

Giving Drink to the Thirsty was engraved by Coornhert in 1552 as the third plate in a suite of seven representing The Last Judgment and Six Works of Mercy (Fig. 1).4 The theme of the Works of Mercy (or Charity) derives from Matthew 25:31–46. Addressing his disciples, Jesus foretold the Last Judgment, when the righteous would be welcomed into heaven and the wicked consigned to eternal damnation. God would distinguish the righteous by the charitable acts they had performed during their lives: feeding the hungry, giving drink to the thirsty, offering shelter to strangers, clothing the naked, and visiting the sick and imprisoned. Medieval theologians added a seventh work of mercy, burying the dead, to the six enumerated by Jesus in the gospel.5 The subject occurs in paintings and glass roundels displayed in almshouses and hospitals in the Netherlands during the fifteenth and sixteenth centuries, sometimes in conjunction with a Last Judgment.6

Heemskerck’s series begins with The Last Judgment, followed by six plates representing the charitable works cited by Matthew. The signature on The Last Judgment identifies Heemskerck as inventor and Coornhert as engraver of the set. Drawings for five of the seven plates have survived.7 All are signed or monogrammed and dated 1552,8 and their dimensions correspond closely to those of the engraved compositions, which reproduce the models in reverse. The Harvard sheet has been incised to transfer the design to the copper plate. Dutch texts beneath the images in the engravings quote the words of Jesus from Matthew 25:35–36. The line under the print after the Harvard composition reads, “I was thirsty and you gave me drink.” (Icwas dorstich, ghi hebt mi te drincken gegeuen; Matthew 25:35.) Images of this charitable scene often represent the recipients as impoverished and supporting themselves on crutches, but Heemskerck has strikingly shown the drinking man with only one arm.9 The vertical format of the compositions, as well as the large scale and Michelangelesque style of the figures in this series, are characteristic of Heemskerck’s designs of the late 1540s and early 1550s.10

8 The Harvard work is dated 15511 [sic], while other drawings for prints in the series are dated 1552. Perhaps Heemskerck completed the drawing in 1551 or initially misdated it to that year and, to conform to the date on the other models, expediently redated it 15511, rather than writing 2 over the last 1. In any event, it seems clear that by writing 15511 he intended to date the drawing 1552.

9 See the painting of 1504 by the Master of Alkmaar in the Rijksmuseum, Amsterdam, SK-A-2815-2, and the undated drawing by Pieter Cornelisz., called Kunst, in the Städelsches Kunstinstitut, Frankfurt am Main, 5508, where the recipients of the charity in scenes of Giving Drink to the Thirsty are represented as impoverished and walking with crutches.

10 Veldman (1986), p. 15. In the Harvard drawing, the figure on the stairs at the upper right was inspired by a soldier in Michelangelo’s Battle of Cascina. 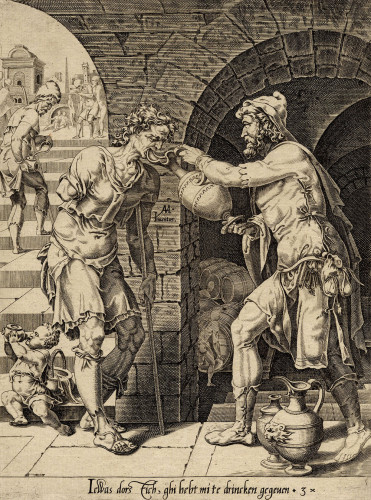 Fig. 1 Dirck Volkertsz. Coornhert, after Maarten van Heemskerck, Giving Drink to the Thirsty, from The Last Judgment and Six Works of Mercy series

Credit Line
Harvard Art Museums/Fogg Museum, Purchase through the generosity of an Anonymous Donor
Accession Year
1994
Object Number
1994.155
Division
European and American Art
Contact
am_europeanamerican@harvard.edu
The Harvard Art Museums encourage the use of images found on this website for personal, noncommercial use, including educational and scholarly purposes. To request a higher resolution file of this image, please submit an online request.