*In the 1936 Sotheby’s sale from the Earl of Warwick's collection, the Fogg drawing and another small study by Bol executed primarily in gray wash, Bust of a Bearded Old Man in a Velvet Beret (Sumowski Drawings, 1, no. 143x), were sold as a single lot in one frame. In his entry on the Fogg study (Drawings 1, no. 105), Sumowski describes the drawing formerly in the Earl of Warwick collection as a separate work--“A pen and wash drawing of the same representation (127 x 101 mm), perhaps the conceptional (sic) sketch for the present drawing”--but they are one in the same. The dimensions he gives for the putative sketch are those of Bust of a Bearded Old Man in a Velvet Beret, which is smaller than the Fogg sheet, and this is perhaps why he assumed that the Warwick Woman in a Window with a Pear was another version of the composition.
Published Text

Ferdinand Bol, one of the few Rembrandt pupils who produced a substantial oeuvre of prints, executed more than twenty etchings.2 The Harvard design served as the model for a signed and dated plate of 1651 (Fig. 1).3 As one of four studies that are directly preparatory to etchings, it belongs to the core group of Bol’s autograph drawings.4 The dimensions of the sheet correspond exactly to those of the platemark of the print, which reproduces the image in reverse. Bol coated the verso of the drawing with black chalk and meticulously incised the recto to transfer the image to the etching ground, tracing with a stylus the contours of the figure, details of the costume, and some of the outlines of the shutter and window. The study established the composition and overall distribution of light and shadow, but it lacks the pictorial refinements and tonal gradations introduced during work on the plate.5 There, Bol also added or changed several details: the cross-piece on the shutter, the necklace, the contour of the extended arm, and, on the proper left sleeve, the cuff and decorative trim at the shoulder. He also animated the bland facial expression of the drawing, giving the woman in the etching an alluring halfsmile and replacing her sideways glance with heavy-lidded eyes, enveloped by delicate shading, that directly engage the viewer.

The composition of Woman in a Window with a Pear recalls paintings of half-length figures at a window executed in the 1640s and 1650s by Bol and other Rembrandt pupils.6 Bol’s The Toper resembles the Harvard drawing and the related etching in more than its setting (Fig. 2).7 The poses and gestures are virtually identical, as are a few details of the invented, historicizing costumes, such as the slashed sleeves and cuffs on the resting arms of both figures. The Toper is not dated, but evidently preceded the drawing and print. Bol transformed the man on the canvas into a woman in the Harvard study, retaining some parts of the costume and modifying others. The feminization of the costume continued on the etching plate, where he added the necklace and reduced and altered the cuff that he had copied faithfully from the painting into the drawing. Scholars have dated The Toper to circa 1650–51 on the basis of its relationship to the print.8

With his coarse features, ill-humored expression, and capacious roemer (drinking glass), the toper must exemplify the negative consequences of excessive drinking.9 Similarly, the woman’s anachronistic clothing, provocative décolleté, desultory glance, and improbable offering attest that this is not a scene from everyday life, but an allusive representation of morally questionable behavior. The meaning of the pear in this context probably derives from proverbial and emblem literature, where the fruit is invoked to construct a metaphor for a maiden’s conduct in courtship.10 In his Minne-spiegel ter deughden (1639), Jan Harmensz. Krul likens pears that have fallen from the tree to young women who too readily offer themselves in love.

The pear that one picks, and cuts from the branch
Is better than the pear that has slipped from the stem.
No maiden who all too hastily falls in love
Has ever attracted a keen lover’s fancy.11

Far from embodying the modesty and reserve that moralists prescribed for women in courtship, our protagonist emerges from the private realm to make a public display of the metaphorically charged fruit, not to mention her bosom, to the street.

1 (This note refers to the provenance.) In the 1936 Sotheby’s sale from the Earl of Warwick’s collection, the Harvard drawing and another small study by Bol executed primarily in gray wash, Bust of a Bearded Old Man in a Velvet Beret (Werner Sumowski, Drawings of the Rembrandt School, New York, 1979, vol. 1, cat. 143x; see note 4), were sold as a single lot in one frame. In his entry on the Harvard study in volume 1, cat. 105, Sumowski describes the drawing formerly in the Warwick collection as a separate work—“A pen and wash drawing of the same representation (127 × 101 mm), perhaps the conceptional sketch for the present drawing”—but they are one and the same. The dimensions he gives for the putative sketch are those of Bust of a Bearded Old Man in a Velvet Beret, which is smaller than the Harvard sheet, and this is perhaps why he assumed that the Warwick Woman in a Window with a Pear was another version of the composition. A painting of this subject appeared at Anderson Galleries, New York, 25–26 March 1931, lot 104, repr.

6 See, for example, Nicolaes Maes, Thoughtful Woman at a Window, Rijksmuseum, Amsterdam (Sumowski, vol. 3, cat. 1330); Jan Victors, Young Woman at a Window, 1640, Musée du Louvre, Paris (idem, vol. 4, cat. 1785); and Bol, Woman at a Window, The Hermitage, St. Petersburg (idem, vol. 1, cat. 122). Bol’s Hermitage painting of the late 1640s shows a woman at a window with a stone frame in a historicized costume with a necklace and pendant above her conspicuous décolletage.

9 The Toper has been vaguely interpreted by Blankert and Ingamells as a tronie —a head and costume study of a distinctive character type—and by Sumowski as an undefined “allegory” (see note 8 for both). On the term tronie, see Marieke de Winkel, Fashion and Fancy: Dress and Meaning in Rembrandt’s Paintings (Amsterdam, 2006), p. 137. Neither reading of the image is satisfactory in light of the multiple meanings assigned to single figures of drinkers in Dutch art of the period. See Ger Luijten in Eddy de Jongh and Ger Luijten, Mirror of Everyday Life: Genre Prints in the Netherlands 1550–1700, (Amsterdam: Rijksmuseum, 1997), cat. 53, pp. 264–67.

11 “De peere die men plukt, en van de tacken snijt, / Is beter als de peer, die van de steele glijt. / Een Jufvrouw, al te haest genegen tot het minnen / Was noyt soo aengenaem aen kloeke Minnaers sinnen.” Jan Harmensz. Krul, Minne-spiegel ter deughden, Amsterdam, 1639, p. 68. A variant holds that a man in search of a wife should refuse the offer of a pear that has been picked by someone else, but desire the fruit that hangs high in the tree and can be plucked by him alone after he has climbed to it. See Kettering, part 2, p. 450. 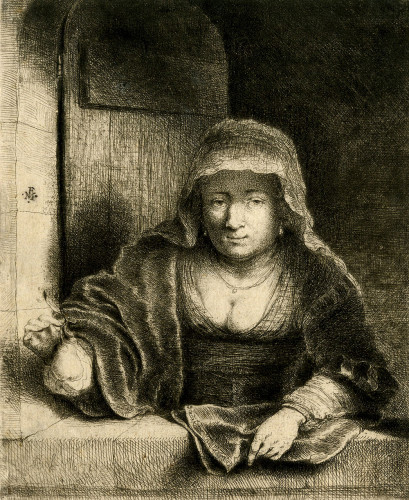 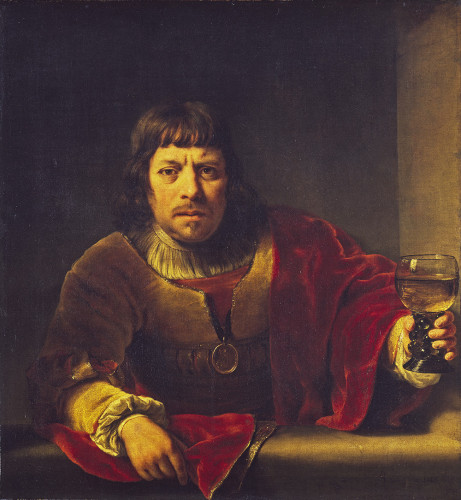 Credit Line
Harvard Art Museums/Fogg Museum, Friends of the Fogg Art Museum Fund
Accession Year
1956
Object Number
1956.228
Division
European and American Art
Contact
am_europeanamerican@harvard.edu
The Harvard Art Museums encourage the use of images found on this website for personal, noncommercial use, including educational and scholarly purposes. To request a higher resolution file of this image, please submit an online request.

Burton B. Fredericksen and Richard Joseph Kubiak, Etchings of Rembrandt and his Followers: A Selection from the Robert Engel Family Collection, exh. cat., J. Paul Getty Museum (Malibu CA, 1977), under cat. no. 69, p. 44

The Draughtsman at Work. Drawing in the Golden Century of Dutch Art, checklist (unpublished, 1980), no. 38