Bloemaert was renowned among his contemporaries for his interest in sketching “a great deal after life,” and for exploring aspects of the local scenery “which are to be seen in great variety round about Utrecht.”1 Nevertheless, very few—under 20—landscapes by the artist include sites or landmarks that can still be recognized today. The distinctive urban architecture seen in the Harvard sheet has allowed scholars to identify the subject of the drawing as Montfoort, a small but picturesque Dutch town located along the Hollandse Ijssel river, in the province of Utrecht.2 Throughout the 17th century, Dutch artists, including Jan van Goyen, Nicolaes Berchem, Roelant Roghman, and Pieter Mulier the Younger, traveled to Montfoort to sketch its old city gates, defensive walls overgrown with vegetation, and the medieval towers of Montfoort Castle.3 While most of these drawings offer relatively distant views of the town, often seen across a body of water, Bloemaert’s closely cropped composition is a more intimate portrayal of a bumpy village street, which extends into the distance, framed by the defensive wall at right and a fenced haystack with trees at left. He rendered the scene in rhythmic strokes of pen and embellished it with pale, transparent watercolors in brown, rose, and green.

The identification of the locale rests on the resemblance between architectural elements visible in Bloemaert’s work with those seen in a slightly later sheet by another Utrecht-based draftsman, Herman Saftleven (Fig. 1).4 Inscribed “te Montfoort” at top center and approaching the street from an almost identical position, Saftleven’s drawing includes a number of structures that can be recognized in Bloemaert’s sheet, such as the tall building with a gable roof and a turret—most probably a city gate—in the background, a small passage with arches, seen in the middle ground, and a round, partially damaged tower, topped with a chimney, at far right.5 It is notable that the same city gate, seen from a different side, appears in another drawing by Bloemaert, stylistically related to the naer het leven (“from life”) experiments of the so-called Berlin Album, produced sometime between 1585 and 1590.6 Since the Harvard sheet (datable to 1630–40) belongs to the mature stage of the artist’s career, it is likely that Bloemaert either returned to Montfoort at this later time or reused naer het leven studies from his youth when composing this highly finished drawing.7 The figure of the peasant seated on a wheelbarrow at left foreground, which helps further animate the composition, was probably also derived from a now-lost life study. A comparable figure of a young man in a hat on a wheelbarrow appears in a drawing at the Hermitage Museum.8

5 Based on comparisons with structures seen in drawings by Berchem and Mulier the Younger, An Zwollo tentatively identified the gate in Saftleven’s drawing as the Heeswijkerpoort; Zwollo, “Pieter Mulier de Jonge, alias Tempesta,” p. 28. We know that the Spanish army damaged and destroyed much of Montfoort’s defensive wall in 1577, which might account for the dilapidated appearance of these structures.

7 Although Bolten had initially dated the Harvard drawing to 1595–1605, he accepted the later date of 1630–40 in the 2017 supplement; Bolten, “The Drawings of Abraham Bloemaert,” p. 107. For an example of the artist reusing drawings decades later, see the catalogue entry for Bloemaert’s Dilapidated Farmhouse (1999.130) in William W. Robinson with Susan Anderson, Drawings from the Age of Bruegel, Rubens, and Rembrandt: Highlights from the Collection of the Harvard Art Museums (Cambridge, Mass.: Harvard Art Museums, 2016), pp. 49–51. No early naer het leven studies related to the present sheet survive today.

8 Abraham Bloemaert, Four Standing and Sitting Figures and A Hay-stack with a Fence (verso), black chalk and brown ink with brown wash, 15.5 × 18.5 cm, St. Petersburg, The State Hermitage Museum, 25 308verso; Bolten, Abraham Bloemaert, c. 1565–1651, vol. 1, no. 1004. It is notable that the Hermitage drawing also includes a black chalk study of a haystack behind a wooden fence, further connecting it with the Harvard sheet, which includes a fragment of this motif at left. 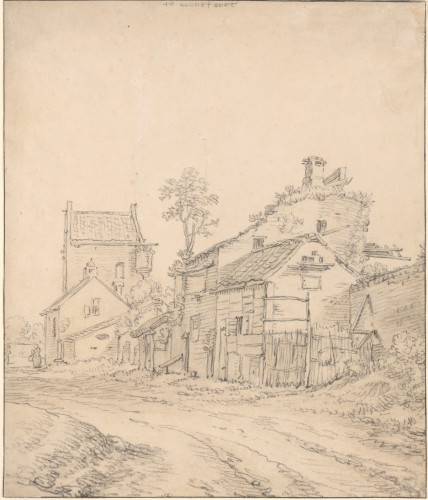