With Pieter de Molijn (2011.514) and Salomon van Ruysdael, the remarkably productive painter and draftsman Jan van Goyen ranks among the leading exponents of the “tonal phase” of Dutch landscape painting. After his initial training with no fewer than five different masters in Leiden and Hoorn, Van Goyen spent a year (1617–18) in Haarlem with Esaias van de Velde, his most influential teacher (1979.62, 2015.169, 2015.170). He returned to Leiden and remained there until 1632, when he settled permanently in the Hague. In the late 1620s and 1630s, Van Goyen adopted the innovations of Haarlem landscapists Molijn, Van Ruysdael, and Pieter van Santvoort, painting dunes, rivers, beaches, cottages along country roads, and winter scenes in a monochromatic palette of finely modulated browns, grays, and greens. He later added panoramas, marine vistas, and views of cities to his repertory.2

Throughout his career, Van Goyen produced finished drawings intended for sale. About eight hundred survive, dating from the middle of the 1620s to the last year of his life. The vast majority bear his signature or the monogram VG and a date. During certain periods he concentrated his efforts on this kind of work rather than on painting; one such time was from 1651 through 1653, when he turned out some 350 finished drawings but relatively few paintings.3 Although he used colored washes in a few of his early works of this type, during the 1630s and early 1640s Van Goyen executed them in black chalk.4 From 1647 on, he combined black chalk with a judicious gray or—in a few sheets from 1651—brown wash to evoke shadows and to model forms. In many instances, he developed the compositions of his finished landscapes—both paintings and drawings—from cursory studies jotted down in sketchbooks during his travels. He probably sold many of the drawings in series, some supplied with a title page, but nearly all these suites have been broken up and can no longer be reconstructed.5

Van Goyen signed and dated more than fifty finished drawings, including On the Seashore, in 1652. It was one of his most productive years for works of this kind, although far more survive from 1651 and 1653. In addition to coastal scenes, his finished landscapes of 1652 depict villages, dunes, rivers, and inland waterways. At least three other drawings dated that year are on papers with a watermark similar to that in the Harvard sheet.6

The site depicted in the Harvard drawing is not identifiable, and may be a composite view rather than an actual location; low towers of the type shown here figure in several of Van Goyen’s scenes of the Dutch coast and inland waterways (Fig. 1).7 The artist’s annotation on a sketchbook page identifies one such structure as a “sea beacon” (zeebaken).8 Precursors of lighthouses, these installations provided and maintained navigational signals. To mark the shoreline for mariners sailing in the dark, an iron basket with burning fuel would have been hoisted with the aid of a pulley up a pole like the one that rises from the balcony in the drawing. In other such works by Van Goyen, the pole stands apart from the tower, in some instances beside a cannon (see Fig. 1). The latter did not serve a defensive purpose, but was fired periodically during a fog to warn shipping of the proximity of shallow water.

A copy of the Harvard drawing is in the Rijksmuseum, Amsterdam.9

1 (This note refers to the dimensions.) The sheet dimensions include unworked margins of a centimeter or more outside the framing lines on all four sides. The image measures 121 × 196 mm. The latter dimensions are close to those of most of Van Goyen’s finished drawings of 1652, which have presumably been trimmed to the image and measure in the range of 115/120 × 190/200 mm.

8 Sotheby’s, New York, 16 January 1985, lot 289. Private collection, New York; Beck (1972–91), vol. 3, p. 19, and cat. 706A, not repr. The black chalk inscription Zeebaken te Petten has been reinforced with brown ink, but Beck accepts the authenticity of the original black chalk annotation. Petten is a village on the North Sea coast between Alkmaar and Den Helder. I am grateful to the owner for bringing this drawing to my attention and for supplying a photograph. 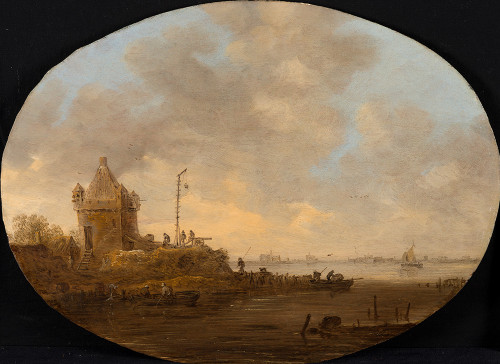 Credit Line
Harvard Art Museums/Fogg Museum, Bequest of Meta and Paul J. Sachs
Accession Year
1965
Object Number
1965.204
Division
European and American Art
Contact
am_europeanamerican@harvard.edu
The Harvard Art Museums encourage the use of images found on this website for personal, noncommercial use, including educational and scholarly purposes. To request a higher resolution file of this image, please submit an online request.

An Exhibition of Dutch and Flemish Drawings and Watercolors, checklist, Unpublished (1954), cat. no. 44, p. 11