Notes
[1] Purchased through the generosity of the Robert Lehman Foundation

Catalogue entry no. 98 by Susan Anderson:

Jacob de Wit used this drawing as the design for the frontispiece of his instructional treatise Teekenboek der Proportien van ’t Menschelyke Lighaam (Drawing Book of Proportions of the Human Body), published in 1747 at the urging of his student Jan Punt, who was fascinated by his master’s drawn proportional studies. The frontispiece design presents a personification of Proportion as a robed woman who uses a compass to determine the correct relative measurements of her drawn human figure.

De Wit’s intricate composition combines attributes of well-known allegories related to this pursuit: the compass, square, and books are often found accompanying Art, Architecture, and Geometry; the figure’s winged temples adorn Invention; the beehive denotes Industriousness; the hourglass stands for Constancy; and the oil lamp signifies Diligence. The characteristic sharp, deft use of the pen distinctly identifies De Wit as the author, as confirmed by his signature at the bottom center. The poses of the putti, especially the kneeling figure seen from behind, appear commonly in De Wit’s later style, confirming a date concurrent with the Teekenboek’s publication.1 Punt’s engraving (Fig. 1) is altered from De Wit’s drawing, with the original landscape, left-hand tree, and overhead drapery omitted. Instead, much of the empty space at left is filled by a squared drawing of the Apollo Belvedere on an easel, copied from plate 8 of the Teekenboek.2 Another drawn version of the composition, very close to Punt’s print, is in the Albertina.3

Jacob de Wit is best known for his decorative ceiling and wall paintings, many of which still adorn the churches, civic spaces, and luxurious canal houses for which they were made. As the primary practitioner of history painting in the Netherlands during the first half of the eighteenth century, De Wit earned laudatory comparisons to Rubens and Titian. Apprenticed first in Amsterdam under the Roman-inspired Albert van Spiers (1666–1718), De Wit gained an introduction to decorative history painting in the grand Baroque manner. However, it was during his teenage years in Antwerp (1711–15) that he blossomed, undertaking a second apprenticeship with Jacob van Hal (1672–1750). More importantly, De Wit studied the works of Rubens — most famously, his cycle of paintings in Antwerp’s Jesuit Church of Saint Charles Borromeo, destroyed by fire in 1718.4 He received admiration for his talents at the Koninklijke Academie, where he studied architecture and perspective and drew from casts of Classical sculptures and live models. He became a master of the Guild of Saint Luke in Antwerp in 1714, and after his return to Amsterdam quickly cultivated commissions for both portraits and decorative schemes.5

Like De Wit’s studies at the Antwerp Academy, the Teekenboek was intended to form part of an artistic education. As De Wit stated in his introduction, teaching the student and art lover how to depict the human body comfortably and correctly was his primary goal. While believing such exercises to be helpful, De Wit also acknowledged their tedium, desiring instead that his readers should ultimately free themselves of such laborious methods by developing a “compass in the eye” (passer in het oog), an idea and method propounded by Michelangelo.6 De Wit’s formula for depicting adults—whether Hercules, Venus, or Apollo, all of whom appear as models within the plates—was for the full head to be proportionally one-eighth of the total height. Although he admitted adopting this oft-repeated Vitruvian ideal, he deviated from the standard proportion of the face (hairline to chin) to the head and, consequently, from the face to the full body. Rather than divide the face to four-fifths of the head, and therefore the Vitruvian one-tenth of the full body, De Wit instead preferred the facial ratio of seven-eighths of a head, resulting in a division of the body to nine and one-third faces. Though subtle, De Wit’s preference results in a slightly leaner and elongated appearance. In addition, many of the twelve illustrations, including those for children and adult faces, are squared in an 8 × 8 or 4 × 4 grid and include brackets around specific body parts, with inscriptions as to the proper proportions in relation to other aspects of the body, such as four faces to one arm. More than many other books on human proportion, De Wit’s instruction is a visually simple and direct division of the human form.

1 My thanks to Robert-Jan te Rijdt for offering his thoughts on the drawing and for sharing the late Janno van Tatenhove’s manuscript materials on De Wit, including his comments on this drawing. Letter to the author, 8 May 2015.

4 See John Rupert Martin, The Ceiling Paintings for the Jesuit Church in Antwerp (London and New York, 1968), pp. 46–51 and chapter 3 throughout, for De Wit’s series of copies after thirty-six panels of the ceiling, now in the British Museum and the Courtauld Institute, both in London, and in the Stedelijk Prentenkabinet, Antwerp. 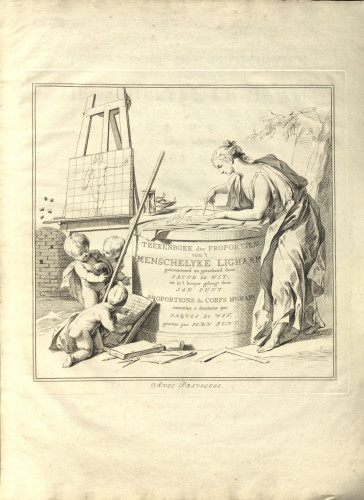