Nicolaes Maes ranks among the most outstanding Dutch painters of domestic scenes and portraits. A native of Dordrecht, he studied with Rembrandt in Amsterdam in the late 1640s and early 1650s, returning to his hometown by the end of 1653. Until about 1660, he specialized in pictures of household life, portraits, and biblical subjects. His varied oeuvre of drawings—more than one hundred survive—all date from this period in Dordrecht. After 1660, Maes devoted himself exclusively to portraiture. In 1673, he moved to Amsterdam, where he attracted a more numerous and wealthier clientele than the patrons he served in Dordrecht.

During the mid-1650s, Maes painted several domestic scenes that feature solitary figures of elderly women, some depicted life size, who engage in spinning, making lace, dozing over the Bible, or saying grace before a modest meal.1 The few drawings that served as preparatory studies for these paintings include summary composition sketches and detailed renderings in red chalk of figures and heads.2 Others, including the present sheet, were not direct studies for paintings, but depict the same models and household activities, and, like the pictures, must date from around 1655.3

In the Harvard drawing, Maes used red chalk to suggest the wrinkled, pink skin of the woman’s face. The combination of red chalk for the face and broadly applied ink and wash for the costume relates this sheet to other studies by the artist, such as the richly pictorial Old Woman Seated, Winding Yarn, in Berlin.4 A slightly smaller drawing in the Maida and George Abrams Collection, Boston—also executed in ink and wash with touches of red chalk in the face—represents the same model in profile (Fig. 1).5 The toothless woman in the Harvard sheet engages the viewer with an unforgettably somber expression, a frank and melancholy portrayal of the physical and emotional effects of old age. 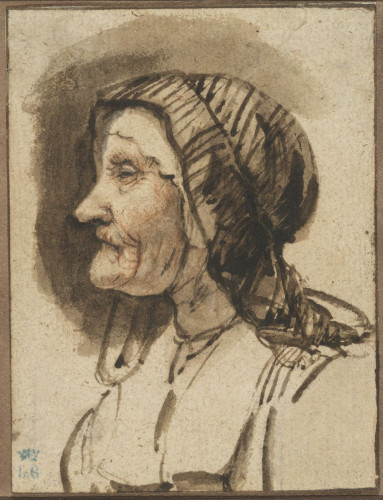 Credit Line
Harvard Art Museums/Fogg Museum, Bequest of Meta and Paul J. Sachs
Accession Year
1965
Object Number
1965.207
Division
European and American Art
Contact
am_europeanamerican@harvard.edu
The Harvard Art Museums encourage the use of images found on this website for personal, noncommercial use, including educational and scholarly purposes. To request a higher resolution file of this image, please submit an online request.

An Exhibition of Dutch and Flemish Drawings and Watercolors, checklist, Unpublished (1954), cat. no. 83, p. 19