Standing Old Man belongs to a group of technically and stylistically related studies executed by Rembrandt in iron-gall ink on paper prepared with a light brown wash.1 A key work for the attribution and dating of these drawings is Ruth and Naomi in the Museum Boijmans Van Beuningen, Rotterdam (Fig. 1).2 It bears on its verso a composition sketch for Rembrandt’s 1638 etching Joseph Telling His Dreams, which establishes the authorship and approximate date of the study on the recto.3 The technique of the Harvard drawing closely resembles that of Ruth and Naomi. The tightly spaced parallel lines that shade Ruth’s face are comparable to the fine zigzag hatchings in the lower right part of the drapery in the Harvard study, as are the wide, heavily impressed outlines in the left shoulder, upper arm, and sleeve of the old man and in the back of Naomi’s garment. Compare also the looping strokes and broken contours that evoke the movement of the sleeves dangling from outstretched arms in both drawings. Finally, Rembrandt structured Naomi’s drapery and that of the old man with long, vertical lines drawn with a reed pen.4

The costume, patriarchal beard, and dismissive sweep of the right arm recall figures of Abraham in scenes of Abraham casting out Hagar, and the Harvard study has been related to Rembrandt’s 1637 etching of that subject.5 Although the two works are close in date, the pose of the man in the drawing is only vaguely similar to Abraham’s stance in the etching, so the Harvard work should not be considered a direct study for the print. Werner Sumowski proposed that Gottfried Kneller adapted the figure from the drawing for his painting Abraham Casting Out Hagar, from around 1670 (Fig. 2).6 Kneller studied in the 1660s with Rembrandt’s pupil Ferdinand Bol, which led Sumowski further to suggest that the drawing might be by Bol.7 While the Harvard study and Kneller’s picture share certain details, notably the gesture of Abraham’s left hand, the connection is less compelling than Sumowski implies. In the painting, Abraham is seen from a lower viewpoint and more in profile than in the drawing; he wears a turban rather than a beret and strides vigorously down a stair toward Hagar. Whether or not Kneller knew the drawing, the similarity of its technique to that of Ruth and Naomi and other studies of the late 1630s secures its attribution to Rembrandt and rules out an alternative attribution to Bol.

A facsimile print by Conrad Martin Metz (1755–1827) reproduces the drawing in reverse.8 It includes the mark of Thomas Banks (1735–1805). The content and typography of the caption, Rembrandt. / Apud C. M. Edm, resemble those of the captions beneath images in Metz’s 1798 publication of facsimiles, Imitations of Ancient and Modern Drawings from the Restoration of the Arts in Italy to the Present Time, but this reproduction is not included there.

1 This group of drawings includes, among others: Otto Benesch, The Drawings of Rembrandt, enlarged and edited by Eva Benesch (Oxford, 1973), vol. 1, cats. 85, 157, 161, and 168, and vol. 2, cats. 203, 218–19, 223, 232, 391, 396, 404, and 423; Peter Schatborn, Drawings by Rembrandt, His Anonymous Pupils and Followers. Catalogue of the Dutch and Flemish Drawings in the Rijksprentenkabinet, Rijksmuseum, Vol. 4 (The Hague, 1985), cat. 13; and Nicholas Turner, European Drawings 4: Catalogue of the Collections (J. Paul Getty Museum Los Angeles, 2001) Available online as PDF (consulted 10 May 2014), cat. 48. For the authenticity and dating of these drawings, see Schatborn, under cat. 5, p. 35, and Martin Royalton-Kisch and Peter Schatborn, “The Core Group of Rembrandt Drawings, II: The List,” in Master Drawings, vol. 49, no. 3 (Fall 2011): 323–46, cats. 38, 40, 41, and 44, pp. 335–37. Due to the discoloration of the Harvard sheet from light exposure, it is not possible to verify definitively that the recto was prepared with brown wash before Rembrandt drew on it with his pen. No brushstrokes from the application of wash are visible. That said, other drawings in the group are very lightly toned and their preparation is now barely distinguishable, so it is most likely the Harvard drawing sheet, too, was lightly toned. My thanks to Penley Knipe for examining the drawing with me.

4 Agnes Mongan and Paul J. Sachs (Drawings in the Fogg Museum of Art: A Critical Catalogue, Cambridge, 1940, vol. 1, p. 277) doubted the attribution of the Harvard drawing to Rembrandt, suggesting that it could be the work of a pupil corrected by the master. Otto Benesch (The Drawings of Rembrandt, Oxford, 1954–57, vol. 1, cat. 143, p. 39) and later authors rightly assigned it to Rembrandt.

8 An impression of the original print is in the boxes of reproductions of Rembrandt drawings in the Witt Library, the Courtauld Institute of Art, London, although with no supporting documentation about the print’s publication or source. 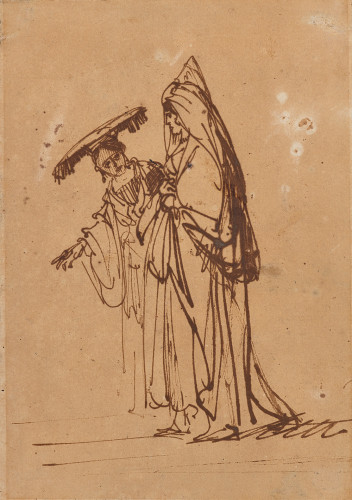 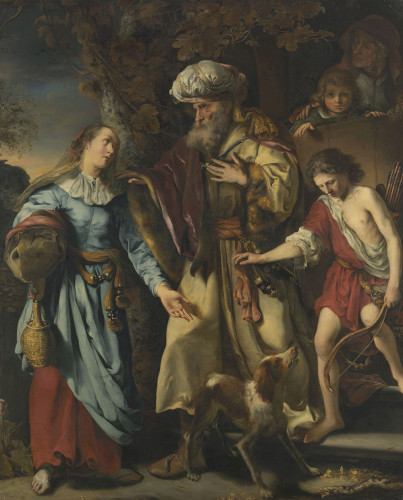 Credit Line
Harvard Art Museums/Fogg Museum, Bequest of Meta and Paul J. Sachs
Accession Year
1965
Object Number
1965.213
Division
European and American Art
Contact
am_europeanamerican@harvard.edu
The Harvard Art Museums encourage the use of images found on this website for personal, noncommercial use, including educational and scholarly purposes. To request a higher resolution file of this image, please submit an online request.

The Drawings of Rembrandt: a revision of Otto Benesch's catalogue raisonné, website, 2012, Benesch 143