Esaias van de Velde was the most original and influential Dutch landscapist of his generation. Born and trained in Amsterdam, Esaias settled by 1609 in Haarlem, where he joined the guild in 1612 and produced his earliest dated works in 1614. He moved to the Hague in 1618 and remained there for the rest of his life.2 In works on paper from the second decade of the seventeenth century, Esaias and his second cousin Jan van de Velde II perfected the type of “rustic landscape”—local, everyday scenery depicted in a plausibly naturalistic style—that first emerged around 1611–12 in the etchings of Claes Jansz. Visscher.3 The compositional schemes, restrained palette, and lively brushwork of Esaias’s paintings exercised a formative influence on the work of his pupil Jan van Goyen and other younger artists, including Pieter de Molijn and Salomon van Ruysdael.

Shepherds and Sheep before a Rock belongs to a group of at least twenty-five landscapes on paper toned with red-chalk wash. All measure—or originally measured—approximately 75 × 170 mm and are executed in brown ink supplemented, in some instances, with brown wash.4 Twelve drawings in the group are attributable to Esaias van de Velde, and thirteen to Jan van de Velde II.5 That Esaias executed the Harvard work is confirmed by its reproduction, in reverse, in an undated suite of six landscape etchings published by Claes Jansz. Visscher (Fig. 1).6 The first plate in the series credits “Esaijas vanden Velde” as designer. Two other compositions by Esaias from the group on reddish toned paper provided models for etchings in this set, but the drawings reproduced in the other three plates have not come to light.7 The prints measure 96 × 172 mm, about 20 mm taller than the three related drawings. Although he added some heavy-handed shading in places, the unidentified etcher conveyed something of the spirited, summary pen work of the originals.

The landscapes on reddish toned paper seem to constitute a discrete and coherent group. Their similar sizes, imagery, and fully resolved compositions can hardly be coincidental, and the two artists did not, as far as we know, make other drawings on paper prepared with red-chalk wash, nor was this a common practice in Dutch art of the period. Questions remain regarding the dating, function, and original context of the group. George S. Keyes convincingly placed the works by Esaias van de Velde around 1615–16, citing their affinities in composition and linear vocabulary to a series of ten etched landscapes of oblong format, which he assigned to the same period, and a drawing signed and dated 1616 (Fig. 2).8 It is likely that Jan van de Velde’s drawings on reddish paper originated at the same time, and not a decade later, as J. G. van Gelder proposed.9 Whatever their original context, it is doubtful that these sheets belonged to one or more sketchbooks.10 Despite their seemingly spontaneous pen work, they are as deliberately composed and neatly executed as Esaias’s finished drawing of 1616 (see Fig. 2) and the prints from about 1615–16. Several depict invented scenery that could not have been studied from nature.11

Finally, we should take note of an imaginary coastal landscape attributed to Hendrick Goltzius, which is executed in brown ink on a sheet toned with red-chalk wash and of the same dimensions as the drawings by the Van de Veldes. Goltzius’s work has been dated to about 1595 and may have provided a model for the Van de Velde group.12 Jan van de Velde studied in Haarlem with Goltzius’s stepson, Jacob Matham, so he could have known the drawing.

1 (This note refers to the provenance.) See the Schaeffer Gallery Archives at the Getty Research Institute, Box 71*, where Sir Henry Streathfield is listed as a prior owner. This individual may be the same as Col. Sir Henry Streatfeild, Chiddingstone, Kent.

3 For the term rustic landscape, and for the contributions of Esaias van de Velde and Jan van de Velde II to its development, see Walter S. Gibson, Pleasant Places: The Rustic Landscape from Bruegel to Ruisdael (Berkeley, Los Angeles, and London, 2000), pp. xxiii–xxviii, 43–44, and 46–47.

9 J. G. Van Gelder (1933, cats. 31, 36, and 62) dated the drawings on reddish toned paper by Jan van de Velde II to the middle of the 1620s, in part because Jan reproduced three of them as illustrations in a songbook, Amsterdamsche Pegasus (Hollstein, vol. 33, nos. 445–54). Their reproduction in the songbook, published in 1627, establishes a terminus ante quem for the drawings, but does not preclude an earlier execution date. In my view they must, like those by Esaias, have originated around 1616, and presumably before Esaias moved to the Hague in 1618. 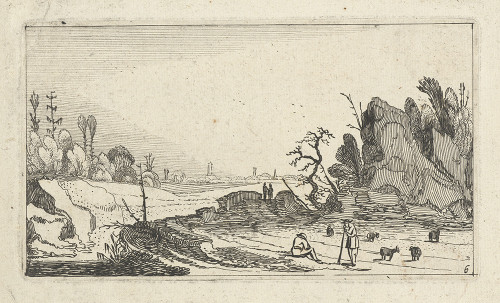 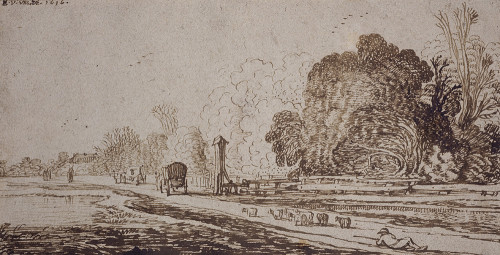 The Draughtsman at Work. Drawing in the Golden Century of Dutch Art, checklist (unpublished, 1980), no. 6