The son of a successful cabinetmaker who fashioned ebony and whalebone into frames and other luxury furnishings, Lambert Doomer enjoyed a comfortable income that evidently enabled him to practice his art as an amateur, albeit a talented and productive one. Documents from his lifetime refer to him as “painter,” and over the course of his long career he executed dozens of pictures that represent a wide range of subjects.1 Doomer’s oeuvre of more than four hundred drawings includes biblical and mythological compositions, genre scenes, copies after other artists, and a few studies of figures and animals.2 However, the vast majority depict landscapes, and they constitute his principal contribution to seventeenth-century Dutch art.

We have no conclusive evidence of Doomer’s training. While he must have known Rembrandt, who painted portraits of his parents, the assumption that Doomer was his pupil in the early 1640s remains unproven. He eventually adopted Rembrandt’s drawing technique and emulated his landscape compositions, but this probably occurred only after he acquired five albums of drawings from the sales of Rembrandt’s goods in 1657 and 1658.3

Most of Doomer’s landscapes—including those he copied after other artists, as well as those based on his own studies—represent sites in France, Germany, Central Europe, and the Netherlands. His works of this type responded to Dutch collectors’ avid interest in topographical images during the latter half of the seventeenth century (see 2011.516). A few drawings feature motifs, such as the unpretentious cottage depicted in the Harvard work, that seem too commonplace to have figured in a collection of topographically significant material.4

Singled out by several authorities as a surpassing example of Doomer’s draftsmanship, Cottage with a Bleaching Yard probably dates from the early 1660s.5 Its composition and technique are comparable to those of landscapes executed in 1663 during the artist’s trip to the eastern Netherlands and the Rhineland. The impressive scale and close, frontal view of the cottage recall his expansive rendering of the buildings in works such as Dymbkes Gate in Anrath (Fig. 1).6 The pen work of the foliage and the clearly defined contours, as well as the skillful blending of the rose-brown and gray washes that evoke the weathered textures of walls and chimneys, are comparable to Doomer’s handling of the media in this and other drawings from the Rhine journey.7

In the right foreground, a woman, assisted by a man who holds a basket, spreads clothing or pieces of unfinished linen on the ground. Doomer quoted her figure from a painting of a slaughtered ox hanging in an interior, where a woman bends down to wipe the animal’s blood from the floor. Although formerly attributed to Rembrandt, the picture is now regarded as a product of his workshop or school (Fig. 2).8 Doomer might have owned this painting.9 Seventeenth-century images of linen bleaching almost invariably depicted the fields outside Haarlem, the area that dominated the industry.10 Although the view in Doomer’s drawing is too limited to identify the location, it is possible, even likely, that the cottage and the structures behind it belonged to a bleaching operation on the outskirts of that city.11

7 A work that exhibits similar handling of the wash is The Fountain at Cleves with an Artist Sketching. Brown ink, brown and gray wash, touches of yellow-brown wash, over graphite. 245 × 368 mm. London, British Museum, 1886,1012.539. Royalton-Kisch, Doomer 6, with earlier references.

8 The Slaughtered Ox (Fig. 2). Panel; 73.5 × 51.5 cm. Signed and partially dated Rembrandt.f.16. Glasgow, Kelvingrove Art Gallery and Museum, Abraham Bredius, Rembrandt Gemälde, 630 Abbildungen (Vienna, 1935), cat. 458. Josua Bruyn et al., A Corpus of Rembrandt Paintings (The Hague and Boston, 1982–2014), vol. 3, cat. C122, pp. 764–70. The authors of this six-volume Corpus of Rembrandt Paintings, as well as Frederik J. Duparc in Carel Fabritius 1622–1654 (The Hague: Royal Cabinet of Paintings Mauritshuis; Schwerin, Germany: Staatliches Museum Schwerin, 2004), p. 34, have dated the Glasgow painting to the early 1640s and very tentatively attributed it to Carel Fabritius, an attribution vigorously questioned by Sumowski (1983), vol. 6, p. 3530 (n. 21). In a variant of the Glasgow work in the Walker Art Gallery, Liverpool, 820, a woman bends down near the ox’s carcass, but her pose and location in the composition differ from those of the figure in the Glasgow painting and the Harvard drawing. Walker Art Gallery, Foreign schools catalogue (Liverpool, 1963), vol. 1, cat. 820, p. 58 (as “Dutch School, XVII Century”). Fred G. Meijer (mount annotation on photograph at RKD) has suggested that the Liverpool painting might be by Doomer.

9 An inventory of property belonging to Doomer, drafted shortly before the death of his first wife (Metje Harmens.) in January 1677, lists a painting of “een Os van Rembrandt” (an ox by Rembrandt); Th. Wortel, “Lambert Doomer te Alkmaar,” Oud Holland, vol. 46 (1929): 171–87, p. 176. While this could have been the painting in the Louvre (Alsteens and Buijs, pp. 30 and 38, n. 18), the possible derivation of the female figure in the Harvard drawing from the one in the Glasgow painting raises the prospect that the latter may have belonged to Doomer. Schulz (1972), p. 147 (n. 262), alluded to the close relationship of the Glasgow painting and the drawing.

11 For images of Haarlem bleaching fields, see ibid., figs. 12–14, and Walter S. Gibson, Pleasant Places: The Rustic Landscape from Bruegel to Ruisdael (Berkeley, Los Angeles, and London, 2000), fig. 68. These etchings by Claes Jansz. Visscher and Jan van de Velde and a drawing by Jan Luyken from the 1690s (Stone-Ferrier, fig. 6) include female workers who, like the woman in Doomer’s drawing, bend to spread linen on the ground. 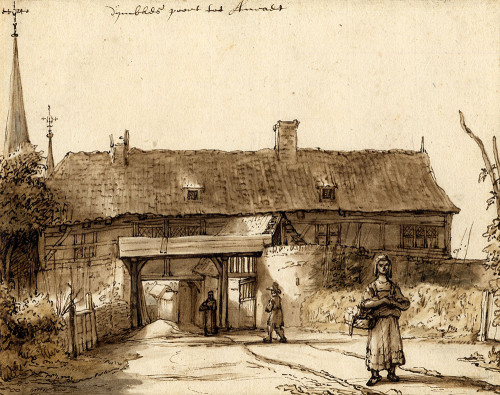 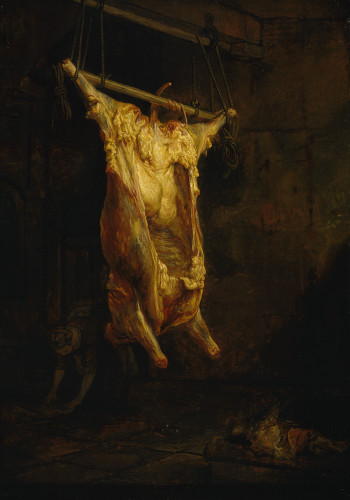 An Exhibition of Dutch and Flemish Drawings and Watercolors, checklist, Unpublished (1954), cat. no. 74, p. 17