[1] According to the Oppenheimer sale catalogue, our drawing was from the “(?) Philipe Collection,” which Hans Ulrich Beck interpreted to be T. Philipe - presumably Thomas Philipe of London, whose sales occurred in the early 19th century. However, the verso inscriptions demonstrate that the first or second Baron Selsey purchased the drawing at Jennings’s sale in 1778. It remained in the family until 1872, excluding Philipe’s ownership. Furthermore, William Robinson (Amsterdam et. al 1991, cat. no. 34) and Beck previously published this drawing with provenance including Alfred Brod in 1963. Robinson identified our drawing with cat. no. 57 in Brod’s catalogue of that year; however, the Brod drawing is a different drawing by Molijn which is signed and dated 1659.

The painter, draftsman, and etcher Pieter de Molijn was born to Flemish parents in London, but spent most of his life in Haarlem, where he is first documented in 1616. From the mid-1620s through the early 1630s, De Molijn belonged to the vanguard of the “tonal phase” of Dutch landscape painting, producing naturalistic views of country roads and cottages distinguished by a nearly monochromatic palette and radically simple diagonal composition. Relatively few pictures have come down to us from the 1630s, but he resumed his active artistic career in the 1640s—his most prolific decade as a painter—and 1650s.1

Close to five hundred drawings by De Molijn survive, virtually all of them landscapes.2 A few depict alpine, Nordic, Italianate, and other foreign scenery, but most evoke the desolate, sandy countryside around Haarlem. The majority of his drawings—more than four hundred—date from the 1650s, when De Molijn, like his contemporary Jan van Goyen (1965.204), turned out a prodigious number of finished landscapes made for sale to collectors. For these works, De Molijn favored papers of two formats: one larger and more oblong (170/190 × 270/300 mm); the other smaller and more nearly square (140/150 × 185/195 mm). Most drawings of 1654 and 1655, his most productive years as a draftsman, are on sheets of the smaller size. During the second half of the 1650s, he used both formats but preferred the larger one, which suited the panoramic and mountainous views he depicted in several landscapes, including the Harvard work.3

In contrast to Van Goyen, who filled his sketchbooks with studies of landscape motifs made from nature and consulted them when composing his finished drawings, De Molijn evidently created these works from his imagination. No studies from nature by him have come down to us, and even plausibly naturalistic scenes seldom incorporate identifiable sites.4 Although superficially like Van Goyen’s handling of chalk and wash, the technique of De Molijn’s late drawings makes a very different impression. Van Goyen’s stroke is decisive and robust, and areas of light and shadow are neatly demarcated. In contrast, the feathery contours and scattered patches of light in De Molijn’s drawings of the 1650s lend to these landscapes an ethereal, restless appearance.

The Harvard work is not dated, but comparison of its technique and composition with drawings of the late 1650s indicates that it very likely originated during the last years of De Molijn’s career (Fig. 1).5 It shows a fanciful, composite view that combines a steep track beneath a tall, overgrown bank with a panoramic vista stretching into the distance. Like other drawings from the artist’s late period, including the one reproduced in Figure 1, it reminds us that pioneers of a naturalistic style in Dutch landscape art, such as De Molijn, Esaias van de Velde, and Jacob van Ruisdael, depicted imaginary foreign scenery as well as the local countryside. 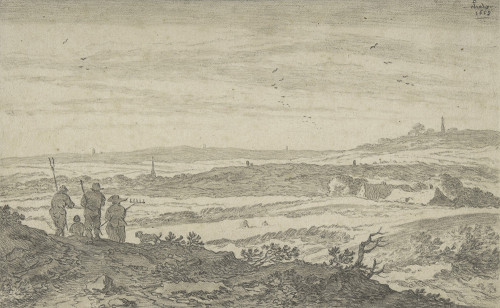