Abraham Bloemaert was one of the first artists in the northern Netherlands to draw the local landscape from life.2 As early as around 1584–86, he sketched cottages, sheds, trees, and cattle observed in the countryside around Utrecht.3 These two studies of deteriorating farmhouses date from about 1595–1605 and belong to an extensive group of farm landscapes, in which the artist delighted in portraying the rustic buildings’ overgrown walls, crumbling masonry, rotting planks, dwindling thatch, and exposed timbers.4 Although informally composed, many of these landscapes, including the Harvard example, are worked up with delicate, pale, transparent watercolors and, in some instances, white opaque watercolor. In Het Schilderboeck (The Painter’s Book, 1604), Karel van Mander singled out the attractive technique of these studies and underscored their remarkable naturalism. Bloemaert’s landscape paintings, he wrote, incorporate “well-observed and droll peasant houses, peasants’ implements, trees, and countryside—things which are to be seen in great variety round about Utrecht and which are drawn by him; for he does a great deal after life and he has a clever manner of drawing and penmanship to which he sometimes adds some watercolors so that it looks particularly good.”5

The numerous prints after Bloemaert’s drawings of landscapes with tumbledown cottages attest to the ongoing popularity, long after Van Mander’s enthusiastic tribute, of his handling of this imagery.6 For example, in 1620 Claes Jansz. Visscher issued a suite of twenty-five etchings of farms, all of which he had copied from previously published prints after Bloemaert’s design.7 Visscher also pirated the composition of the title print from an earlier series, but provided a new text. Instead of ten lines of Latin verse praising the countryman’s life, Visscher’s Dutch title simply touts the designer’s name and the lifelike character of the scenery: Verscheijden aerdige Lanthuijsen nae tleven Gekonterfeyt deur ABloemaert (“Various characteristic country houses portrayed from life by A Bloemaert”).8

Bloemaert used both sides of the Harvard sheet for studies of dilapidated farm buildings. Whether they represent two separate houses or different views of the same farmstead is not clear.9 The structure shown as an overgrown ruin on the verso appears in an earlier drawing by the artist with its walls and roofs comparatively intact.10

In 1637, more than thirty years after he executed the study on the recto of the sheet, Bloemaert incorporated much of it into the composition of a painting, Farmyard with the Prodigal Son (Fig. 1).11 The battered facade and derelict walls viewed up close in the drawing occupy the middle ground of the picture, enclosing the muddy farmyard where the prodigal son, reduced to the condition of a swineherd, kneels beside the pigs’ trough and resolves to return to his father’s house (Luke 15:15–19). In the painting, Bloemaert widened the house at the left, revised its roofline and fenestration, and lowered the trough to accommodate the animals. He reproduced the wooden structure and deteriorating masonry at the right with fewer changes, although the composition of the picture required a modest extension of the wall.

Bloemaert probably executed another drawing of the motif recorded on the recto of the Harvard sheet, but from a standpoint 90 degrees to the left. This putative study does not survive, but evidently provided the point of departure for a finished drawing dated 1650, the year before the artist’s death and some five decades after he presumably sketched the site.12 In the latter work, the foreshortened facade of the farmhouse recedes diagonally into the pictorial space at the left, and the walls at the right in the Harvard drawing run parallel to the picture plane across the middle ground. Bloemaert completed the composition of the finished drawing by adding an array of agricultural implements and figures of working and relaxing peasants in the foreground.

8 Gibson, pp. 155–57 and 162, title print of the Boëtius Adamsz. Bolswert series reproduced p. 156, fig. 108. Idem, p. 162, noted the change to the title print from the Latin poem in the Bolswert series to Visscher’s “laconic” “Verscheijden aerdige Lanthuijsen. . . .” Gibson (p. 162) translates aerdige as “lovely.” Van Mander used the same word in his description of the peasants’ houses in Bloemaert’s landscape paintings (see n. 5). Hessel Miedema in Van Mander/Miedema, vol. 1, p. 450, and vol. 2, p. 233, translated Van Mander’s aerdige as “well-observed,” but also remarked that it was “one of the vaguest and most well-worn terms used by Van Mander,” and it could also mean fine, light, and subtle. Bolten (2007), p. 406 (n. 2), preferred characteristic to Roethlisberger’s attractive. 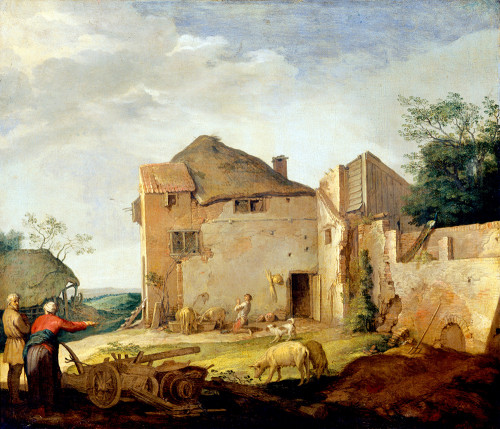