Jan van der Straet (Johannes Stradanus, Giovanni Stradano) studied with Pieter Aertsen in Antwerp for three years and joined the guild there in 1545. He soon left for Italy and, in 1548 or 1549, was engaged by the Arazzeria Medicea, the tapestry works in Florence, where he remained for most of the rest of his life as a versatile and prolific painter and designer of tapestries and prints. For two decades he worked under Giorgio Vasari, who supervised the Arazzeria. In 1561, the Medici grand duke Cosimo I commissioned a cycle of forty tapestries of hunting subjects to hang in twenty rooms of his villa at Poggio a Caiano. Only twenty-eight were produced, all from cartoons by Stradanus, between 1566 and 1577. About half of the tapestries have survived.1

Soon after the weaving commenced, Stradanus began to collaborate with printmakers and publishers to introduce his designs for the hunts to an international clientele, an effort he pursued to the end of his life.2 In 1567, he made drawings after several of the tapestries or cartoons. Six of these served as models for Hieronymus Cock in Antwerp, who in 1570 published prints showing the tapestries with their borders.3 In 1574 and 1576, Cock’s widow, Volcxken Diericx, issued two additional sets of six plates each, also after drawings dated 1567, but without the borders.4 In the latter year, Stradanus left Florence, worked briefly in Naples, then returned to the Netherlands. In Antwerp from 1576 to 1578, he planned several projects with the engraver Philips Galle, who began to fill the void in the Antwerp print publishing business left by Cock’s death.5 The most ambitious and long-lived of these was a new series after Stradanus’s designs for the tapestries of hunts. From 1578 to 1580, Galle brought out a set comprising a title print and forty-three plates.6 The title includes a text by Stradanus, dated 1578, in which he explains that the engravings represent small versions of the models he made for the tapestries in the villa at Poggio a Caiano.7 Some prints in this series relate—if not always exactly—to tapestries that were actually woven, while others represent ideas that were never executed.8 Stradanus must have completed some of the drawings for this series before he returned to Italy, where he is documented in 1579.9 A greatly expanded suite of engravings issued by Galle after 1596 included the forty-three scenes published in 1578–80, plus sixty-one new hunting subjects. Many plates in this last series represent hunts not envisioned in the original program for Poggio a Caiano.10

Drawings survive for the title and about three-quarters of the plates in Galle’s series of 1578–80.11 Several, like Wolf Hunt with Traps and Arquebus, were done primarily with the pen in brown ink, in most instances with additions in brown wash and/or white opaque watercolor. Others, in which Stradanus used pen and ink mainly for the contours, are more extensively shaded in brown, gray, or blue wash. All the drawings are highly finished, and nearly all correspond closely, in reverse, to the prints, but only about half were partially or extensively incised on the contours to transfer the design to the plate.12

The Harvard drawing illustrates the hunting of wolves with traps, snares, and an arquebus. A horseman drags the carcass of a ram that has been cut open, so that the scent of the entrails will lure the prey to a location where rope snares have been set, a pit has been dug and covered with twigs, and a marksman with an arquebus has concealed himself in a tree. The Latin text in the margin beneath the related print reads in translation, “Thus the wolf is deceived by the bowels of the dead sheep or a short noose or a pit covered with leafy twigs” (Fig. 1).13 The subject reprises that of a print in the series published by Volcxken Diericx in 1574, although the composition has been significantly revised (Fig. 2).14 The 1574 print in turn conflates elements from two tapestries Stradanus designed for Poggio a Caiano: one, which survives, shows the trapping of wolves in a pit and with snares; the other, which is lost, depicted a horseman laying the scent with a sheep carcass to lure wolves into the range of a hunter’s gun.15 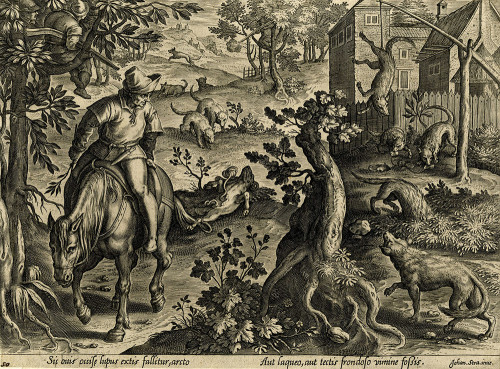 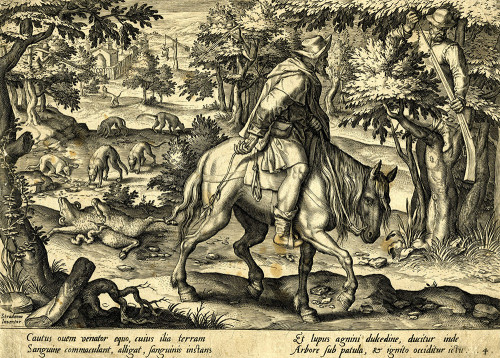 Credit Line
Harvard Art Museums/Fogg Museum, Purchase through the generosity of Melvin R. Seiden and Janine Luke and an anonymous donor in honor of Lisbet and Joseph Koerner
Accession Year
1997
Object Number
1997.205
Division
European and American Art
Contact
am_europeanamerican@harvard.edu
The Harvard Art Museums encourage the use of images found on this website for personal, noncommercial use, including educational and scholarly purposes. To request a higher resolution file of this image, please submit an online request.

Catalogue of Manuscripts, chiefly illuminated, and remarkable as examples of antiquity, calligraphy and ornamentation, including also valuable texts: besides some Drawings and Separate Miniatures, and a few Autographs..., auct. cat., Bernard Quaritch (London, 1886), no. 35768, pp. 3491-2

William A. Baillie-Grohman, Sport in Art: An Iconography of Sport during Four Hundred Years from the Beginning of the Fifteenth to the End of the Eighteenth Centuries, Ballantyne and Co. Ltd. (London, England, 1913), p. 119 (n. *)