Catalogue entry no. 63 by Susan Anderson:

Adriaen van Ostade’s only child, Johanna Maria, gave birth to his only grandchild the day after his burial in 1685. Both died within the next two years, leaving no direct descendent. Shortly after Van Ostade’s death, his art holdings were sold at auction. Dusart appears to have acquired the majority of Van Ostade’s studio contents, judging by his enormous studio and art collection—including vast amounts of paintings, drawings, and prints by Van Ostade—inventoried after his death.1

Adriaen produced this drawing—dated on stylistic grounds by Bernhard Schnackenburg to the early 1640s—during a period of transition (c. 1638–46) in which he moved away from roughly drawn, rowdy subjects inspired by Adriaen Brouwer to refined representations of the noble peasant. Here, neither gruff nor genteel, a standing drinker chats with his two seated friends in the foreground, while four figures sit behind him, set off by the hostess who tallies the beer tab with chalk on a blackboard. In the left background, another woman cooks at the fireplace, accompanied by two children. Instead of his early brawlers, Adriaen’s peasants here converse over a tankard, pipe, or game of cards—although such features as crooked noses and wide smiles classify them as distinctly unrefined.

Also during this period, Adriaen’s increasing use of gray and brown wash lends his drawings the impression of painterly tonality, here emphasizing the foreground figural grouping with strong, contrasting shadows over the more diffusely shaded background groups.2 In other drawings, Adriaen minimally suggested background elements with fewer and lighter penstrokes—especially prominent in his Interior with Peasants Merrymaking, now in London (Fig. 1)—or omitted all but the foreground figures, often tempting a later hand—frequently Dusart’s—to fill in background detail. In The Pater Familias, also in London (Fig. 2), the lighter handling of the pen and gray wash is the work of just such an interloper.3

Although Adriaen often directly transferred figural groupings from these transitional compositional studies to his paintings, no panel related to this sheet has been identified. 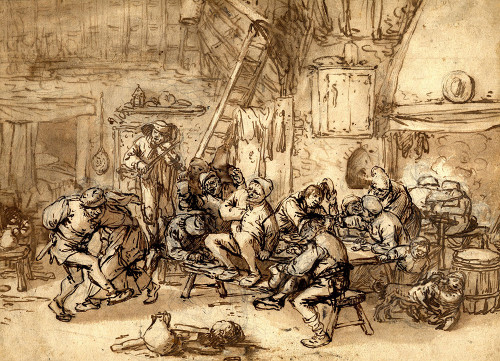 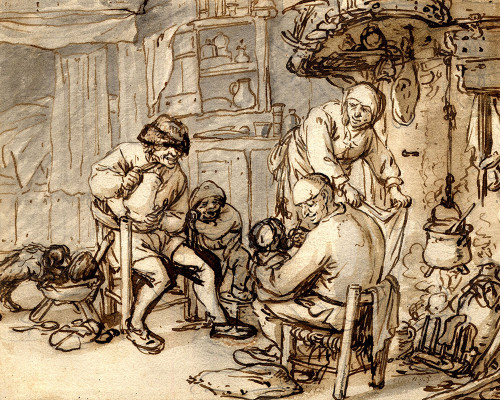