About twenty studies of nude models can be attributed to Govert Flinck.1 The earliest are two signed drawings—one of a woman holding a letter, the other of a seated man viewed from the back—that date from around 1636–39. Like several figures of the 1630s by Rembrandt, they are executed in red chalk applied with broad, vigorous strokes.2 During the 1640s and 1650s, Flinck and other Amsterdam painters adopted Jacob Backer’s practice of drawing figure studies in black and white chalks on blue paper (2013.170). At least once, in 1648, Flinck and Backer sat beside each other and sketched the same model.3 A document dated 1658 attests that Flinck, Ferdinand Bol, Jacob van Loo, and others drew and painted a woman named Catharina Jansz., whom they paid to pose in the nude.4 Flinck’s models presumably also included the Van Wullen sisters, characterized by neighbors in testimony before a notary as “famous whores,” who lived near the artist’s workshop on the Lauriergracht. In paintings of the late 1640s that hung in his atelier, Flinck depicted them “naked as the day they were born . . . lying asleep in the most indecent way on a cushion.”5

Those paintings are presumably lost, but a drawing by Flinck in Braunschweig possibly conveys an idea of their appearance (Fig. 1).6 The technique of the Braunschweig study closely resembles that of Seated Nude Woman as Diana. Common to both works are the finely drawn, narrowly spaced hatchings and the liberal, in places idiosyncratic, application of scattered, patchy white chalk highlights. Neither work bears a signature, but both are comparable in handling to signed or securely attributed drawings by Flinck from the late 1640s.7 The nearly pristine condition of the chalks in Seated Nude Woman as Diana affords a rare view—in the model’s legs, for example—of the refined, precise lines and delicately modulated highlights and shadows found in some of Flinck’s figure drawings.8 Others, such as A Kneeling Youth (1999.140), were executed with a broader, looser touch.

That Flinck adorned the woman’s head with a diadem in the shape of a crescent moon, an attribute of Diana, virgin goddess of the hunt, seems gratuitous in a study from a live model, but its inclusion helps to clarify the purpose of his drawing. Illustrations of the episode from Ovid’s tale of Callisto, in which Diana discovers that one of her supposedly chaste nymphs is pregnant, frequently depict the seated goddess pointing toward the disgraced young woman while her companions forcibly disclose her condition.9 An example from Flinck’s immediate circle is a painting by Jacob van Loo, who, as we know from the document cited above, drew from the nude with him (Fig. 2).10 In life-drawing sessions, models were occasionally asked to assume the pose of an ancient statue or protagonist in a composition representing a biblical or literary subject, and Flinck’s study of a woman in the attitude of Diana censuring Callisto could be the product of such an exercise.11 No painting by Flinck of this subject is recorded, but we should not exclude the possibility that he produced the drawing in preparation for a lost picture.

6 Govert Flinck, Reclining Female Nude (Fig. 1). Black and white chalk on greenish blue paper. 268 × 400 mm. Braunschweig, Herzog Anton Ulrich-Museum, Z 365. Werner Sumowski, Drawings of the Rembrandt School (New York, 1979), vol. 4, cat. 944x; Thomas Döring in Thomas Döring, with Gisela Bungarten and Christiane Page, Aus Rembrandts Kreis: die Zeichnungen des Braunschweiger Kupferstichkabinetts (Braunschweig: Herzog Anton Ulrich-Museum, 2006), cat. 16, pp. 56–57. The figure was incorporated into a drawing illustrating Boccaccio’s tale of Cimon and Ephigenia, which is inscribed with Flinck’s name by an early hand; Sumowski, vol. 4, cat. 972x. The technique of the latter drawing is difficult to reconcile with Flinck’s oeuvre. Sumowski dated it—and, by extension, the Braunschweig study—to circa 1655, citing a tenuous similarity to the handling of his cat. 888. If by Flinck, the drawing could date from the end of the 1640s. Peter van den Brink (Van den Brink and Van der Veen, pp. 80–81) dated the composition to circa 1647, but implausibly attributed both it and the related Braunschweig study to Bartholomeus Breenbergh.

9 The most influential compositional model for this subject was Cornelis Cort’s engraving after Titian’s painting Diana and Callisto; Sluijter, pp. 174–79.

11 Willem Goeree, Inleydinge tot de Al-ghemeene Teycken-Konst (Middelburg, Netherlands, 1668), pp. 33–34, recommends, as one way to choose the model’s pose, to follow “some invention by a good master, from memory or by looking at prints and drawings,” since one finds such beautiful examples in the works of Raphael, Primaticcio, Carracci, and other famous Old Masters. On this studio practice, see also Peter Schatborn (2010), vol. 1, under cat. 82, p. 213, where he also notes that the pose of a reclining female nude by Flinck (Fondation Custodia, Frits Lugt Collection, Paris) derives ultimately from the antique Sleeping Ariadne, but in the seventeenth century was adapted for life studies and compositions of various subjects. Backer and Breenbergh used such a pose in paintings of Cimon and Ephigenia; Sluijter, pp. 243–44. In one of Flinck’s early nude studies, the female model poses as Bathsheba with David’s letter in her hand; Peter Schatborn in Brugerolles et al., cat. 21, pp. 85–86. 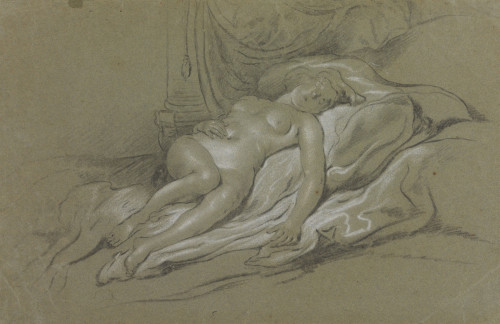 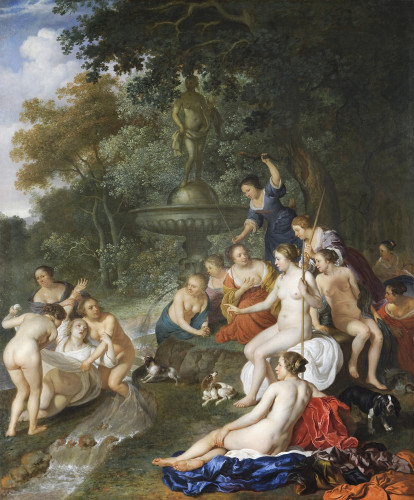