The first seventeenth-century Dutch painter to specialize in winter scenes, Hendrick Avercamp invented a compositional type that features a frozen river receding into the distance, with dozens of colorfully dressed figures skating or traversing the ice and enlivening the gray and brown tonalities and pale sunlight of the hibernal landscape. Avercamp’s pictures—the earliest date from about 1605—provided a model for artists such as Esaias van de Velde and Jan van Goyen, who, during the second and third decades of the century, elaborated and refined the winter landscape.1 Although trained in Amsterdam, Avercamp spent most of his life in the remote town of Kampen. For centuries, he was better known by the nickname “the Mute of Kampen,” which derived from his disability, than by his given name.2

Avercamp was also the first Dutch artist who turned out large numbers of finished drawings worked up with opaque and transparent watercolor and intended for sale. Most, including this Winter Landscape, are signed with his monogram. An inscription written by the owner of one such work attests that Avercamp sold landscape watercolors to collectors as early as 1613.3 The taste for colored drawings in the northern Netherlands must have been introduced by Flemish immigrant artists, such as Hans Bol (2001.54 and 2004.75), Jacob Savery, and David Vinckboons, who had all settled in Amsterdam before Avercamp studied there during the first decade of the century.4 Avercamp rarely dated his works, and the chronology of the drawings and watercolors has proven especially difficult to reconstruct.5 The Harvard Winter Landscape is probably from the late 1620s. Its composition and technique recall a watercolor from this period in the Rijksmuseum, Amsterdam (Fig. 1), as well as one of the datable works on paper, a winter scene of 1630 in Hamburg that also includes sled-riders, skaters, and kolf players on the ice.6

Avercamp based many of the innumerable figures in his paintings and watercolors on studies drawn from life that he retained in the workshop and used in multiple images. While few such studies are known today, he must have had a large stock of them, and we can often infer their existence because of the recurrence of a figure in different works.7 For example, the hunter at the lower right of the Harvard composition appears in the watercolor reproduced in Figure 1 with his head turned to the right, left leg forward, and left arm extended to display his dead quarry. As noted by Marijn Schapelhouman, Avercamp probably drew more than one study of the same model, which would account for the variant poses of recurring figures such as this hunter.8

Seventeenth-century collectors of watercolors and finished drawings usually preserved them in albums, but a few were attached to thin planks, framed, glazed, and hung on walls.9 In 1639, the merchant Pieter Koninck, brother of the landscape painters Jacob and Philips Koninck, owned “four drawings by the Mute of Kampen behind glass.”10 The marine painter Jan van de Cappelle, who owned 883 drawings by and after Avercamp, displayed at least one in a frame. Among the paintings listed in the 1680 inventory of Van de Cappelle’s estate was “A drawing, winter, with a glass, by the Mute.”11 The Harvard watercolor, which was mounted on a plank and inserted into a seventeenth-century ebony frame, is a rare example of this practice that has survived (Fig. 2).12

3 Hendrick Avercamp heeft my dit gelewert / den—28 January 1613. In Campen (“Hendrick Avercamp delivered this to me 28 January 1613 in Kampen”). The annotation occurs on the verso of a landscape watercolor in the Fondation Custodia, Frits Lugt Collection, Paris; Jonathan Bikker and Marijn Schapelhouman in Roelofs, p. 15, repr. fig. 1, and pp. 90–91, repr. figs. 113 and 114. See below, note 6, for another inscription by an early owner on the verso of a watercolor in Hamburg.

4 Of the three, only Vinckboons was still alive during Avercamp’s training in Amsterdam. Although technically different from Avercamp’s watercolors, Bol’s works in transparent and opaque watercolor must have furnished an important precedent for Avercamp’s colored drawings. Marijn Schapelhouman in Roelofs, p. 90, notes that Avercamp’s free, transparent handling of the medium recalls colored drawings by the Flemish artists Jacob Grimmer and Jan Brueghel the Elder.

6 Marijn Schapelhouman in Dutch Drawings of the Seventeenth Century in the Rijksmuseum, Amsterdam: Artists Born between 1580 and 1600; Catalogue of Dutch and Flemish drawings in the Rijksprentenkabinet, Rijksmuseum, Amsterdam (Amsterdam and London, 1998), text vol., under cat. 15, p. 8, groups the Harvard work with the watercolor Ice Scene with a Hunter Showing an Otter (Fig. 1), which he dates to the late 1620s. Black and gray ink, transparent and opaque watercolor, over a sketch in graphite or black chalk. 201 × 335 mm. Amsterdam, Rijksmuseum, RP-T-1883-A-240. See also Marijn Schapelhouman in Roelofs, pp. 85–87, repr. figs. 108 and 109. The watercolor in Hamburg must date, on the evidence of an inscription on its verso, from 1630 at the latest; Annemarie Stefes, Niederländische Zeichnungen 1450–1850: Kupferstichkabinett der Hamburger Kunsthalle. Ed. Andreas Stolzenburg and Hubertus Gaßner (Cologne, 2011), vol. 1, cat. 31, p. 80, repr. vol. 1, p. 27, color plate 31. The inscription in brown ink, in a seventeenth-century hand, reads, “Dit heeft de Stom tot Campen gedaen Cost 6 gl ao 1630 dat is veel meer waerdich / is genaem Her-ic Avercam zijn const is in goed estijm.” (The Mute at Kampen did this Cost 6 guilders in the year 1630 it is worth much more / [he] is named Her-ic Avercamp his art is well regarded.)

12 The work was removed from the board for conservation reasons in 1985, but is shown in Figure 2 as exhibited in its seventeenth-century frame. The wooden plank, now removed because of its inherent risk to the object, is preserved at the Harvard Art Museums. 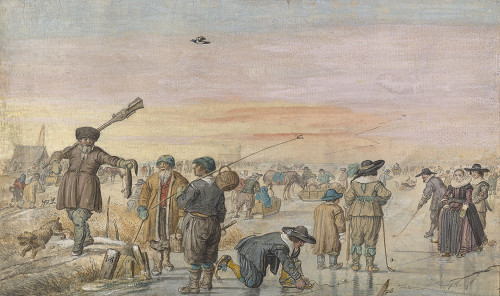 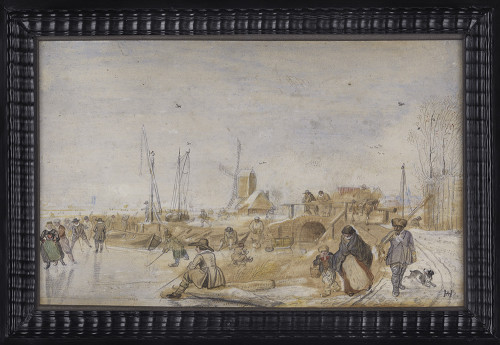 Marijn Schapelhouman and Peter Schatborn, Dutch Drawings of the Seventeenth Century in the Rijksmuseum, Amsterdam: Artists born between 1580 and 1600, Rijksmuseum and Merrel Holberton (Amsterdam and London, 1998), under cat. no. 15, pp. 8-9 (n. 1)