Although De Gheyn III’s manner of draftsmanship was undoubtedly related to the graphic technique of his father and teacher Jacques de Gheyn II, the flawless xecution and the highly linear, almost abstract quality f this sheet epitomize his own unique drawing style. Working with a heavily charged pen on coarse tan paper, the artist depicted the same woman’s head in six different positions. Her deep, expressive wrinkles were rendered using short, stipple-like strokes, while the headscarf was executed mostly through the combination of regular parallel hatches and subtle white highlights. The long-standing appreciation for the younger artist’s penmanship is confirmed by the fact that this drawing was previously owned by British painter Sir Joshua Reynolds (1723–1792), a highly discerning art collector and the first president of the Royal Academy of Arts.

Jacques de Gheyn III, the son and pupil of Jacques de Gheyn II (1953.38, 25.1998.10, 1953.86), is known primarily as a draftsman and printmaker.2 The first and most productive phase of Jacques III’s artistic career lasted from 1614 to about 1619.3 Around 1630, Constantijn Huygens wrote that in his early work, De Gheyn “furnished such brilliant evidence of his talents, both in drawing . . . and, to some extent, also in painting, that to the amazement of his contemporaries he already equals the great masters.” However, his output had declined during the 1620s, provoking Huygens to lament that his friend had failed to live up to expectations and fallen into “an unfruitful and unpraiseworthy slumber.”4 In his 1983 monograph on the De Gheyn family, I. Q. van Regteren Altena catalogued about one hundred drawings by Jacques III, but more than half of those are known only from prints after them or verbal descriptions in sale catalogues. Few have come to light in the past thirty years.5

Studies of single figures and heads wrapped in heavy drapery appear occasionally in the work of Jacques de Gheyn II, but they constitute a principal theme in the oeuvre of his son. In some of Jacques III’s drawings, such as Six Studies of an Old Woman’s Head, the subjects could have been observed from life, while others represent biblical or historical personages.6 The Harvard work is closely related to a sheet with five studies of another old woman’s head, which still belongs to the Abrams Collection (Fig. 1).7 The two remained together from, at the latest, the middle of the eighteenth century until 2011, when George Abrams presented Six Studies of an Old Woman’s Head to Harvard.

The masterful technique and variety of emotional expression in these two drawings demonstrate the artist’s virtuosity, as De Gheyn must have intended in works of this kind. They belong to a type, perfected by Jacques II, of flawlessly executed, artfully arranged studies that, while reminiscent of the traditional model sheet, were presumably made for sale or gift rather than workshop use (Fig. 2).8 Jacques III’s technique relies on dense stippling, parallel strokes, and zigzag hatchings from a pen heavily charged with gallnut ink. The startling contrast of the dark ink and tan paper, reinforced in the Harvard example by the addition of highlights in white opaque watercolor, intensifies the visual impact. De Gheyn wrapped all six heads with fabric shaped into multifaceted folds, and he skillfully described every angular ridge and recess. In places the corrosive ink has degraded the paper, forming areas of continuous dark brown tone that now blur the nuanced pen work with which the artist modeled the shadows. Van Regteren Altena singled out Six Studies of an Old Woman’s Head as “one of the most characteristic studies by Jacques III,” and dated it and the related Abrams sheet to around 1625–30.9 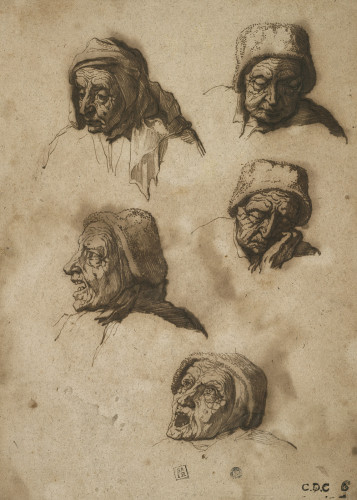 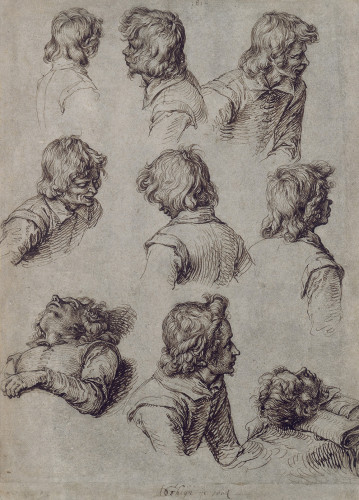 Fig. 2 Jacques de Gheyn II, Nine Studies of the Heads of a Boy and a Young Man

The Draughtsman at Work. Drawing in the Golden Century of Dutch Art, checklist (unpublished, 1980), no. 5