Landscape with Riders is datable, on the basis of its composition and technique, to around 1618–20. Esaias van de Velde left Haarlem and settled in the Hague before October 1618, so it probably belongs to the very productive phase of his career that followed his arrival in the political capital and seat of the Dutch court. Landscapes with horsemen, one of Esaias’s favorite themes, figure in his work as early as 1614.1 Prominent features of the present design—the location of the riders in a foreground corner, the road emerging from an allée of trees, and an open vista on the opposite side—recur in paintings and a drawing from the late teens and early twenties, a date range also indicated by the costumes.2 The type of picturesque, dying tree in the center foreground of the drawing also dominates Esaias’s etching Wooded Landscape with Travelers of about 1618–19 (Fig. 1), in which the rendering of the foliage also recalls the varied pen work of the Harvard sheet.3 Two paintings dated 1619 include similar weeping trees and are particularly close in composition to the drawing (Fig. 2).4 Finally, the ink-and-wash technique of the work resembles the handling of a drawing dated 1619 in Leipzig.5 George S. Keyes noted that the subject and design reflect Van de Velde’s persistent admiration for the work of David Vinckboons.6

Landscape with Riders is a fully resolved composition executed in the studio. Although neither signed nor dated, it must be a finished, independent work of art rather than a study for a painting or print. 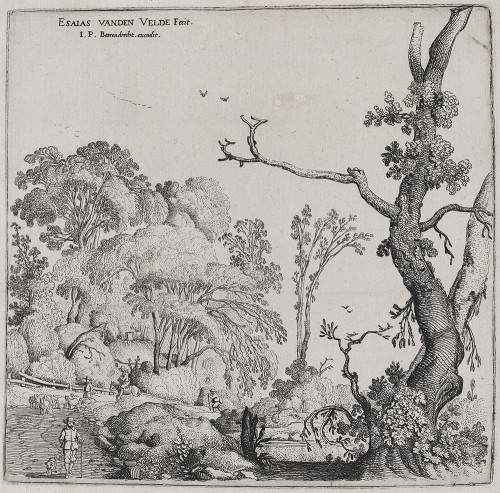 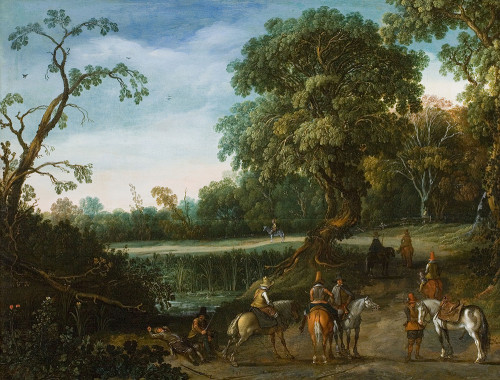