Farms and a Dovecote by a Frozen River, which dates from about 1617–18, is an early example of Esaias van de Velde’s innovative use of black chalk for a summary sketch of a landscape.1 Although Van de Velde was not the first Dutch artist to draw landscapes in black chalk, George S. Keyes rightly underscored the originality and influence of his technique. Following the lead of Esaias, countless landscapists—including Jan van Goyen (1965.204), Pieter de Molijn (2011.514), and Jacob van Ruisdael (2008.251 )—favored the medium for both quick sketches and finished compositions.2

The drawing served as the basis for a more finished version of the same scene executed in black chalk and gray wash (Fig. 1).3 The latter work is only marginally larger than the Harvard sheet, and Esaias introduced few changes to the design. He reduced the large tree in the right foreground and worked up the sky with long, horizontal strokes of the chalk. The deployment of the wash to define areas of shading and solidify the modeling of the forms lends to the second version a more pronounced effect of space and depth. Whether Esaias routinely followed this process to develop his finished drawings is not clear. The survival of the Harvard sketch and the Berlin work in Figure 1 constitutes a rare instance in his oeuvre in which both preliminary and definitive versions of the same composition have come down to us.4

Keyes identified the urban skyline in the center distance as that of Haarlem, which is recognizable by its most prominent feature, the church of Saint Bavo.5 Esaias lived in Haarlem until 1618. During that year, he moved to the Hague, where he spent the rest of his life.6

The black-chalk counterproof on the verso of the sheet evidently records, in reverse, a lost composition by the artist (Fig. 2). Although in places indistinct and partially obscured by the blotchy offset of black chalk at the right, it shows a town on a river or other body of water, its banks lined with houses and a mill. In the center foreground, a ferry transports human and bovine passengers to the opposite shore, and other rowing boats approach the bank at the left. Beyond the ferry, the masts and riggings of larger vessels rise to the right of a large tree, and in the distance, more buildings are visible. 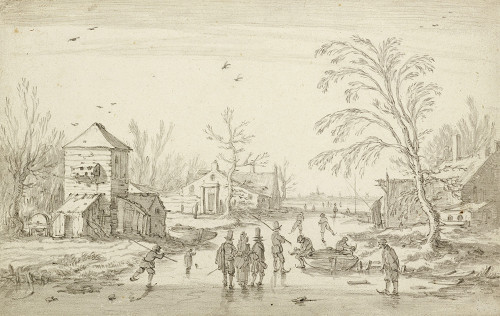 Fig. 1 Esaias van de Velde, Farms and a Dovecote by a Frozen River 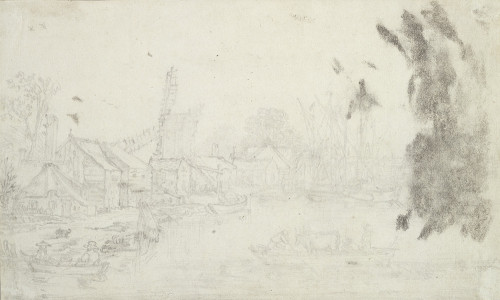