Nicolaes Maes studied with Rembrandt in Amsterdam during the late 1640s and early 1650s, and the broad, loose pen lines and rich, skillfully modulated washes of this drawing recall his teacher’s technique of that period.2 Many of Maes’s drawings relate to the innovative paintings of domestic life that he produced during the 1650s. Four small sketches on the verso of this sheet represent a figure raising an index finger to his or her lips.3 These studies are connected to Maes’s paintings of eavesdroppers, which date from 1655 to 1657, and the composition on the recto must belong to the same period.4

A drawing in the Wadsworth Atheneum, Hartford, Connecticut, so closely matches the Harvard work in size, media, technique, and subject that the two studies must represent variant compositions for the same project (Fig. 1).5 If Maes executed these drawings in preparation for a painting, it was more likely a genre scene than a portrait. In 1656, he did paint a portrait of an unidentified man seated beside a desk in his study.6 Although the picture shares several details with the two drawings, the sitter is hatless and the arrangement of his arms and hands differs. His position—one hand resting on the arm of the chair and the other lying across his abdomen—is a conventional one in male portraits, including several done in the 1650s and 1660s by Maes.7

In the Harvard and Hartford drawings, the figures prop their elbows on the desk and rest their heads on their hands. This pose occurs in Dutch portraits but is more common in genre paintings and prints that show men and women reading, thinking, or sleeping.8 For example, a panel dated 1648 by Gerbrand van den Eeckhout depicts an elderly savant, dressed in a fancifully historicizing costume, whose gesture and pensive gaze anticipate the poses of the figures in Maes’s drawings (Fig. 2).9 The head that appears upside down at the top center of the Harvard sheet might represent an alternate idea in which the man sports a beret instead of the broad-brimmed hat he wears in the main image. In genre paintings by Ferdinand Bol and a print by Henrick Rochuszn van Dagen (Fig. 3), scholars in their studies wear berets.10 The poem beneath the image in Van Dagen’s print celebrates the pleasures and value of the contemplative life,11 and Maes’s drawings presumably carry a similar meaning. A few genre paintings that represent a scholar in his study are attributed to Maes in old sale catalogues, but none can be traced today.12

1 (This note refers to the provenance.) The Harvard drawing came from an album that was made up and bound in the eighteenth century, when it was probably acquired by George Ramsay, Eighth Earl of Dalhousie (1739–1787). See Julia Lloyd Williams, Dutch Art and Scotland: A Reflection of Taste (Edinburgh: National Galleries of Scotland, 1992), p. 163. In addition to some thirty sketches by Maes, this volume contained dozens of drawings by other Rembrandt pupils and followers. It remained in the Dalhousie family until 1922, when it was sold to the London dealer P. & D. Colnaghi and shortly thereafter dispersed by the Paul Cassirer gallery, Berlin (see L. 717a and William Robinson, “The Early Works of Nicolaes Maes, 1653 to 1661,” Ph.D. diss., Harvard University, Cambridge, 1996, pp. 318–27).

5 Nicolaes Maes, Man in His Study (Fig. 1). Brown ink, brown and grayish brown wash; 192 × 182 mm. Wadsworth Atheneum, Hartford, CT, 1932.293. Werner Sumowski, Drawings of the Rembrandt School (New York, 1979), vol. 8, cat. 1864x. Like the Harvard work, the Hartford drawing came from the Dalhousie album and, after the album was broken up, belonged to the Strölin collection in Lausanne prior to its acquisition in 1932 by the Wadsworth Atheneum (see n. 1). 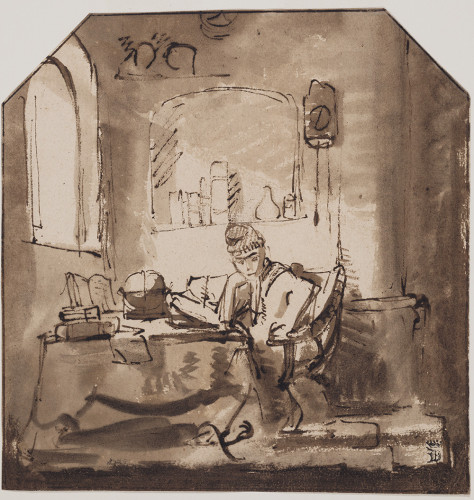 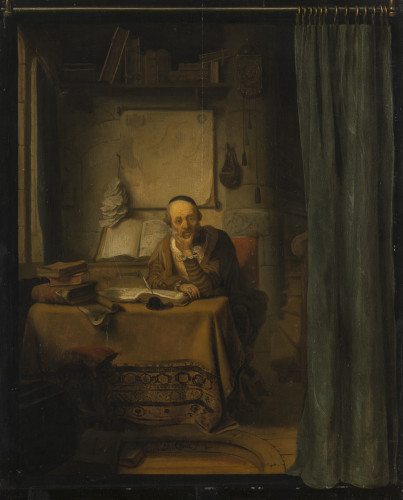 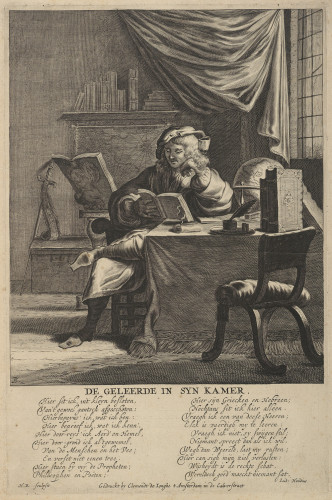 Credit Line
The Maida and George Abrams Collection, Fogg Art Museum, Harvard University, Cambridge, Massachusetts, Gift of George Abrams in honor of Anne Brooke and Peter Brooke (A.B. ’52, M.B.A. ’54) and in appreciation of their major gift of Dutch paintings to the Harvard Art Museums
Accession Year
2016
Object Number
2016.318
Division
European and American Art
Contact
am_europeanamerican@harvard.edu
The Harvard Art Museums encourage the use of images found on this website for personal, noncommercial use, including educational and scholarly purposes. To request a higher resolution file of this image, please submit an online request.

J. R. Judson and Egbert Haverkamp-Begemann, Rembrandt after Three Hundred years: an exhibition of Rembrandt and his Followers, exh. cat., The Art Institute of Chicago (Chicago, IL, 1969), under cat. no. 203, p. 200

Peter Schatborn, Rembrandt and his Circle: Drawings in the Frits Lugt Collection, Thoth Publishers and Fondation Custodia (2010), vol. 1, under cat. no. 89, p. 229