Adriaen van de Venne was one of the most talented book illustrators working in the Dutch Republic. This smallscale, jewel-like drawing served as a preliminary study for an illustration to Jacob Cats’s sensationally popular poem Houwelick (Marriage). Published in 1625, Cats’s volume was a kind of domestic treatise, outlining the principles of appropriate female behavior, from courtship to widowhood. In the text and the illustrations, both Cats and Van de Venne drew analogies between different stages of a woman’s life and the seasons of the year. Entitled Spring, this drawing depicts an elegant young lady presenting her companion with a fragrant bloom during a walk in the Dutch countryside. While on the one hand the sheet celebrates female powers of seduction and the enchantments of young love, the inclusion in the foreground of symbols of fidelity—a pair of dogs and a thistle plant—underscores the more didactic aspects of Cats’s poem.

Poet, propagandist, and painter in oil and watercolor, Adriaen van de Venne was also seventeenth-century Holland’s outstanding designer of book illustrations. His inexhaustible talent for presenting original, vernacular imagery in a compact, vivid composition distinguishes both his illustrations and the satirical grisaille paintings in which he also specialized. His most successful and enduring illustrations were those for Jacob Cats’s sensationally popular Houwelick (Marriage), a long, didactic poem, published in 1625 in Middelburg by Adriaen’s brother Jan, that prescribes a code of behavior for women in courtship, marriage, and family life.1 In a foreword to the first edition of Houwelick, “Adriaen van de Venne, Painter and Draftsman,” explained “to the art-loving reader” that he drew the illustrations “from the author’s mouth,” and was “completely informed of the author’s intentions.”2 Most of Van de Venne’s designs are dated 1622, so their discussions must have occurred before Cats left Middelburg in 1623.3

Cats initially organized the text of Houwelick in four sections: “Bruyt” (Bride), “Vrouwe” (Wife), “Moeder” (Mother), and “Weduwe” (Widow). In these he analogized the stages of a woman’s married life to the seasons of the year, with spring corresponding to the bride, summer to the wife, autumn to the mother, and winter to the widow. Following Cats’s original scheme, in 1622 Van de Venne designed engravings to head these sections. Each shows a couple at one of the four stages of life, standing before a seasonal landscape. His meticulously finished drawings for all four plates have survived. The studies for Winter (Fig. 1),4 Summer, and Autumn belong to the Kupferstichkabinett, Staatliche Museen zu Berlin, and the Harvard work served as the model for the print representing Spring. All are signed and dated 1622, are identical in size, and are executed in the same media, and all correspond precisely to engravings by an unidentified printmaker that reproduce the compositions in reverse. Prior to the 1625 publication of Houwelick, Cats augmented the four-part text with two more chapters, one devoted to the conduct of the “Maeght” (Maiden) and one to the “Vryster” (Sweetheart). Van de Venne’s illustrations that introduce those sections differ in conception and format from the four discussed above.5

In the Harvard drawing, a young couple strolls in a vernal landscape. The woman holds an aromatic bloom—probably a rose, a symbol of love—beneath her companion’s nose.6 Van de Venne adapted the figures and one of the dogs, changing only the decoration of the woman’s skirt, from a painting dated 1620 that depicts the Five Senses, personified by servants and celebrants at an outdoor banquet (Fig. 2).7 Planted conspicuously in the right foreground of the drawing is a thistle, which, like the dogs, stands for fidelity. In the distance, fishermen and a boating party ply the moat of a castle, identifiable as Kasteel Ter Hooge, near Koudekerke, Zeeland.8 The similarly composed design for Winter features, in the place of Spring’s flirting lovers, an elderly couple warming their hands over a brazier in an icy landscape. In poignant ruins, the castle Honingen looms in the distance, while skaters, sleighs, and ice fishermen make their way across its frozen moat (see Fig. 1).9

8 T. Stenger, formerly of the Topographical Department, Rijksbureau voor Kunsthistorische Documentatie, identified this as Kasteel Ter Hoge, near Koudekerke on the erstwhile island (now peninsula) of Walcheren, Zeeland. See Peter Schatborn, with intro. by Karel G. Boon, Dutch Genre Drawings of the Seventeenth Century: A loan exhibition from Dutch museums, foundations, and private collections (International Exhibitions Foundation; Amsterdam: Rijksmuseum, Rijksprentenkabinet; New York: Pierpont Morgan Library; Boston: Museum of Fine Arts; Chicago: Art Institute of Chicago, 1972), cat. 102, p. 62. A painting by Van de Venne of circa 1615–20 includes the same elements as the drawing—castle, moat, “May boat,” and a fashionably dressed couple on the bank—in a very different composition. It is likely that this painting, too, once represented Spring in a series of Seasons. Bol (1989), p. 25, fig. 12. 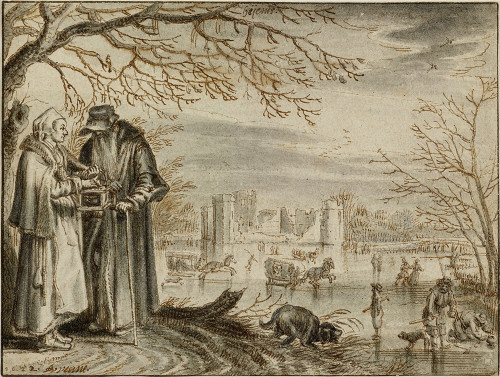 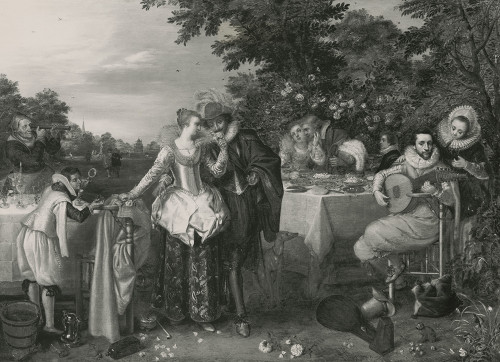