The landscapist Anthonie Waterloo produced hundreds of drawings and nearly 130 etchings, but only a few of his paintings are known today.1 His drawings are remarkable for their diverse scenery, technical ingenuity, and occasionally unconventional compositions and motifs. Many are finished works, made for sale. Like Lambert Doomer and Roelant Roghman (2011.516, 2005.252), Waterloo catered to the demand from collectors who assembled albums with images of cities, towns, buildings, and other notable sites, and his large, meticulously detailed topographical views are his most impressive achievements. A drawing of this type from 1649, showing a picturesque log shack on the Amstel river in Amsterdam, is his earliest dated work,2 and similarly finished renderings of the city’s gates and ramparts followed in the early 1650s. During the 1650s, Waterloo undertook at least two extended journeys, and he used the sketches made on those trips to produce finished drawings of the sites he had visited. Like many landscapists (e.g., Aelbert Cuyp; see 1949.33), he traveled along the Lower Rhine, making studies in and around Utrecht, Rhenen, Arnhem, Amersfoort, Nijmegen, and Cleves. About 1658, he embarked on a tour through northern Germany that might have lasted two or three years, and that likely took him as far east as the Baltic port of Danzig (Gdansk). Drawings of Hamburg and its surroundings, Lüneburg, and the Oliva monastery near Danzig resulted from this trip.3

Waterloo’s landscapes include panoramas, winter scenes, forest interiors with quiet pools, woodlands with rugged banks and waterfalls, and cottages or small villages nestled among tall trees. Some of the woodland scenes recall paintings by Jacob van Ruisdael, but drawings by Simon de Vlieger must have provided his most influential models, particularly for his charmingly eccentric close-up studies of tree trunks and rustic buildings engulfed by foliage and undergrowth.4 Waterloo’s most original works are compositions in a vertical format, dominated by a single tree or clump of trees set against a landscape background—in some examples, at twilight or in winter. Through technical improvisation and the combination of various media—colored chalks, pastels, charcoal, and opaque watercolor, in addition to ink and wash—he created a remarkable range of pictorial effects in these drawings.5

In the Harvard panorama, the trees at the right, the shaded foreground, and the gray wash in the sky at upper left all frame the castle and its dependent structures against the sunlit woods before it and the river beyond. Feathery trees on high ground similarly serve as framing devices in other panoramas by Waterloo, such as View of Haarlem and the Ruins of Brederode (Fig. 1).6 There, he depicted the distant city within an encompassing, detailed representation of its surrounding topography. The Harvard drawing, too, is not merely a finished landscape in which a castle figures as a picturesque motif, but the record of a particular house and its setting. The property is almost certainly Kasteel Doorwerth, a moated brick structure that still stands on the floodplain of the Lower Rhine east of Arnhem in the province of Gelderland (Fig. 2).7 Several Waterloo drawings of Arnhem are known, but to our knowledge, this is his only view of Doorwerth.8

The handling of the foreground of the Harvard sheet illustrates the technical ingenuity and care that Waterloo invested in his finished drawings. In the foliage of the two prominent trees and those in shadow below, Waterloo created selective highlights by exposing the underlying white paper, perhaps by blotting the wet wash. These small glimmers of white lend a translucency and shimmer to otherwise undifferentiated pas- sages of shading.

6 Anthonie Waterloo, View of Haarlem and the Ruins of Brederode (Fig. 1). Black chalk, oiled charcoal, black ink, gray wash, 417 × 643 mm. Amsterdam, Rijksmuseum, RP-T-1905-18B. This drawing is the right half of an enormous panorama of Haarlem, of which the left half is also in the Rijksmuseum, RP-T-1905-18A. The ruins of Brederode appear in the left half.

7 That the castle could be identified as Doorwerth was suggested in an unsigned annotation—“Doorwerth?”—on the mount of a photograph of the drawing in the Rijksbureau voor Kunsthistorische Documentatie. When I first wrote about the drawing in Seventeenth‐Century Dutch Drawings: A Selection from the Maida and George Abrams Collection (Amsterdam: Rijksmuseum, Rijksprentenkabinet; Vienna: Albertina; New York: Pierpont Morgan Library; Cambridge: Harvard University Art Museums, 1991 cat. 41, pp. 100–101), I rejected this identification, but, with many more images of the castle now available, decided to revisit it. My thanks to Laurens Shoemaker, assistant curator of historical topography, Rijksbureau voor Kunsthistorische Documentatie, who confirmed that the drawing very likely depicts Doorwerth and called my attention to the watercolor attributed to J. P. van Wisselingh, Doorwerth Castle, watercolor, 260 × 427 mm. Gelders Archief, Topografisch-historische Atlas Gelderland, 1551-GM 09613. This sheet also depicts the property from the south. Thanks, too, to Erik Löffler, curator of Dutch and Flemish Old Master drawings and prints, Rijksbureau voor Kunsthistorische Documentatie, who concurred and communicated Mr. Shoemaker’s conclusion. Peter Schatborn noted in correspondence with the author (27 December 2013) that a signed painting by Lambert Doomer includes a view of the castle from the southeast. See Lambert Doomer, Country Lane with Cart near Doorwerth Castle (Fig. 2). Oil on panel, 47 × 63.7 cm. (Formerly?) with Galerie Hans, Hamburg. In addition to this painting and a drawing by Doomer in Saint Petersburg (Wolfgang Schulz, Lambert Doomer: Sämtliche Zeichnungen, Berlin and New York, 1974, cat. 169, p. 79, repr. pl. 84), there are seventeenth-century views of Doorwerth by Herman Saftleven; Wolfgang Schulz, Herman Saftleven, 1609–1685: Leben und Werke; Mit einem kritischen Katalog der Gemälde und Zeichnungen (Berlin and New York, 1982), cats. 647–49. Doorwerth was built from the thirteenth century to about 1560. It was largely destroyed during the heavy fighting in this area in 1944, but was reconstructed to its original appearance in the 1950s. 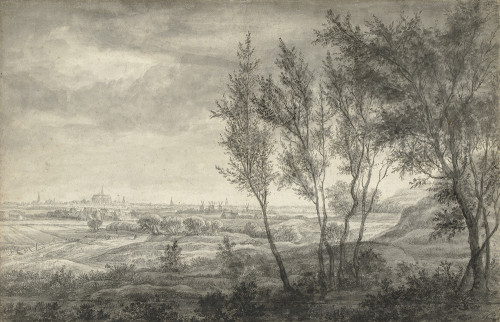 Fig. 1 Anthonie Waterloo, View of Haarlem and the Ruins of Brederode 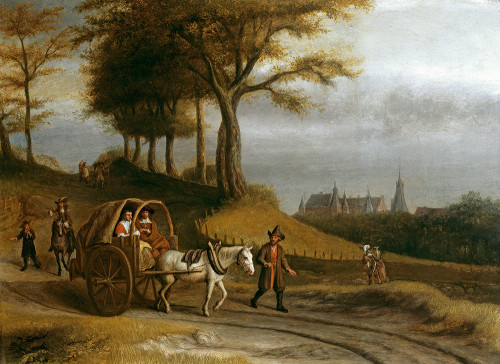