Allart van Everdingen introduced the Scandinavian landscape into seventeenth-century Dutch art. Based on his firsthand experience of the Nordic countryside, his paintings depict a wilderness of fir trees, rugged cliffs, boulders, waterfalls, and isolated, weatherbeaten buildings constructed of logs and rough-hewn planks. Most of Everdingen’s early paintings—those that date from 1640 to 1644, prior to his Scandinavian journey—are marine works with rough seas, but they include a river landscape in the style of his second teacher, Pieter de Molijn. (His first, according to Arnold Houbraken, was Roelant Savery.) In 1644, Everdingen, probably sailing on a Dutch merchant vessel engaged in the timber trade, visited Risør and Langesund on the southeastern coast of Norway and the region around Götheburg and north to Trollhättan in western Sweden. Back in the Netherlands by February 1645, he lived in Haarlem until 1652 and then settled permanently in Amsterdam. From 1646, the earliest date on a painting of a Scandinavian scene, until the end of his career, Nordic imagery was the predominant—although not exclusive—subject of his oeuvre.1

In her monograph on Everdingen’s drawings, Alice Davies catalogued 654 works as originals by his hand. Only a few are studies made on the spot during his 1644 Scandinavian trip.2 Those—and others that have not survived—provided the precious stock of motifs he consulted when designing paintings, drawings, and prints of Nordic views.3 Like Molijn (2011.514) and Jan van Goyen (1965.204), Everdingen turned out a remarkable number of finished drawings intended for sale to collectors. He executed autonomous drawings in three media combinations: brown ink and brown wash; gray ink and gray wash; and ink and watercolor. Most are signed with the artist’s AVE monogram. Many were produced as series representing the elements, seasons, or months (1932.206) .4

The Harvard landscape is one of more than one hundred finished watercolors, in various formats, that are known today. Approximately half of these show Nordic imagery. Davies catalogued the Harvard work with fifteen other watercolors of similar dimensions, some of which represent Scandinavian scenes (Fig. 1), while others show Dutch views.5 Most of the watercolors in this group probably date from the 1660s, although the chronology of Everdingen’s works on paper is difficult to establish.6 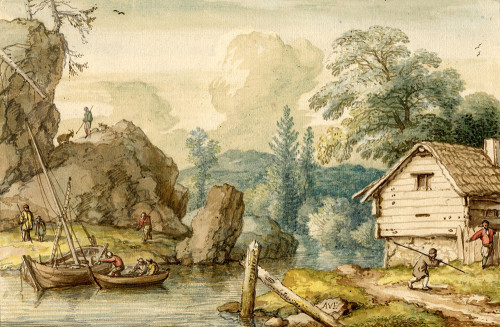