Jan van Bouckhorst worked as a glass painter and an etcher, but he is best known for a miscellaneous oeuvre of drawings that constitutes “a veritable anthology of the art of his time.”1 Dated drawings survive from 1612 to 1629.2 His technique incorporated influences from older artists, such as Hendrick Goltzius and Jacob de Gheyn II, as well as from his contemporary Willem Buytewech, and he treated a broad range of themes, from biblical and mythological subjects to portraits, merry companies, scenes from everyday life, allegories, and armorial designs.3 Bouckhorst designed the title page to the 1628 edition of Samuel Ampzing’s Beschryvinge ende Lof der stad Haerlem (Description and Praise of the City of Haarlem).4 Ampzing published verses that laud the artist’s “bold and steady” draftsmanship, and the book includes a print after a window Bouckhorst designed for the Great Council Chamber, or Vroedschapskamer, of the Haarlem Town Hall.5

Juffrouw Braet-Haringh belongs to a type of bust-length portrait or head study developed by Goltzius and draftsmen in his circle. The technique of boldly scribbled strokes from a heavily charged pen also derives from Goltzius’s drawings.6 When the work first came to light, it was proposed that the actual Juffrouw Braet-Haringh, or “Mistress Grilled Herring,” must have been “a prominent member of the Haarlem Fishmarket.”7 However, this was more likely a comic character in a popular entertainment, such as a farce presented by a chamber of rhetoricians (rederijkerkamer), a kind of amateur literary society whose public readings and performances figured prominently in the cultural life of Netherlandish towns during the sixteenth and early seventeenth centuries.8

Eddy de Jongh related the Harvard work to a sheet in the Rijksmuseum, Amsterdam, that shows the same technique, dimensions, signature, and date (Fig. 1).9 It depicts a bust-length figure sporting a sixteenth-century-style feathered beret, and Bouckhorst’s inscription identifies the fellow as Sr [Sinjeur] Hans Stockvis (“Mr. Hans Dried Cod”). The two works are so alike, De Jongh noted, that they surely belong together, either as pendants or components of a series whose other drawings have not survived. Their gustatory names and Hans Stockvis’s archaic costume recall popular comedy and rederijker play characters, such as Peeckelhaering (“Pickled Herring”) and Hans Wurst (“John Sausage”), who are familiar from paintings by Bouckhorst’s Haarlem contemporary Frans Hals. If the subject of the Harvard drawing belonged to a troupe of itinerant players or a rederijkerkamer, it is virtually certain that Mistress Grilled Herring was a man, because male actors generally performed the female roles in such productions.10

5 Ibid, p. 373, title page, and print between pp. 148–9. The window depicted The Siege of Damietta. It was Bouckhorst’s most famous work during the seventeenth century, but does not survive. 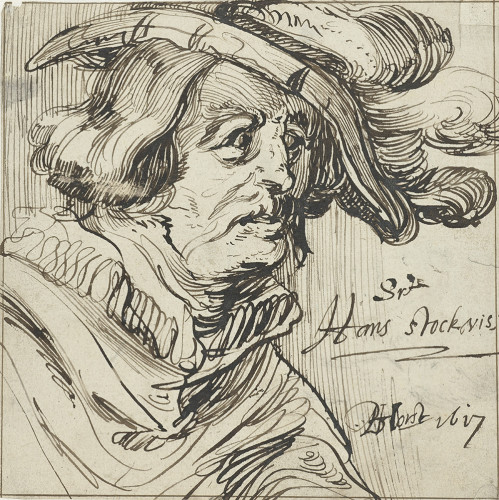 Marijn Schapelhouman and Peter Schatborn, Dutch Drawings of the Seventeenth Century in the Rijksmuseum, Amsterdam: Artists born between 1580 and 1600, Rijksmuseum and Merrel Holberton (Amsterdam and London, 1998), under cat. no. 33, p. 19