Belgica Offered Help belongs to a suite of thirteen designs by Joachim Wtewael that recapitulate the military and political vicissitudes of the Low Countries from the origins of the Eighty Years’ War in the 1550s and 1560s to the armistice of 1609. The principal protagonist of each composition is the maidenly figure of Belgica, who personifies the Netherlands. We follow her from an uneasy courtship by her Spanish overlords, through her violent subjugation by forces under the Duke of Alba, to the liberation by the armies of Prince William of Orange and his son Prince Maurice. In the foregrounds of Wtewael’s drawings, Belgica and the military and political leaders on both sides of the Dutch Revolt enact stages of the struggle, although not always specific events. The neatly delineated scenes in the landscapes beyond clarify and amplify the foreground action.1

Twelve of Wtewael’s original drawings have come to light, and one composition is known only through a copy. The copy and nine of the original designs, including the Harvard sheet, are signed or inscribed with the artist’s name and numbered in a sequence that corresponds to the chronology of the events represented.2 Three originals are signed but unnumbered.3

Belgica Offered Help is the fifth composition in the series. As Elizabeth McGrath noted in her authoritative 1975 interpretation of the drawings, the preceding (fourth) scene depicts the triumphant Duke of Alba trampling the maiden, while soldiers tear at her already tattered clothing (Fig. 1).4 Belgica still struggles to free herself from Alba’s domination in Harvard’s work, but here the swaggering, overconfident duke turns away from her and engages the viewer with a condescending glance. With Alba distracted, Belgica reaches out to a group of noblemen that includes William and the young Maurice. McGrath suggests that the ship approaching a walled city in the background of Belgica Offered Help may allude to the Dutch rebels’ capture of Den Briel in 1572, but the significance of the two merchants discussing cargo at the lower right remains unclear.5

Until recently, scholars could only speculate about the function and date of the series. The drawings had been dated from around 1610 to the early 1620s and tentatively identified as finished, independent works of art or models for paintings or prints.6 The appearance of the original of a composition previously known only through a copy resolved one of these questions: The Truce came to light in a British private collection and was acquired in 2000 by Maida and George Abrams (Fig. 2).7 The sole dated sheet in the series, it bears the autograph inscription Ao 1612.

Thanks to recent research, we now know that Wtewael’s designs served as models for glass paintings in the vroedschapskamer (aldermen’s chamber) in the town hall of Woerden. The States General commissioned the windows to commemorate negotiations that took place in that room in March 1610.8 The negotiators hoped to resolve a stalemate between the States of Utrecht (province) and dissidents who had seized control of the government of the city of Utrecht. Wtewael participated in the coup and sat on the insurrectionist city council. His prowar and conservative Calvinist convictions inform the designs he produced for the windows, most conspicuously in The Truce (see Fig. 2), which McGrath interpreted as an admonition against making peace with the treacherous Spanish.9 The windows do not survive, but they are described in manuscript notes by the Utrecht antiquary and connoisseur Arnoldus Buchelius (Aernout van Buchel, 1565–1641). He recorded that the decoration comprised twelve windows, so one of the thirteen subjects was omitted, and they were in place in 1612, the year that Wtewael inscribed on the design for The Truce. Presumably painted on clear glass on the scale of the drawings, the narrative scenes occupied the lower row of the sash windows. Painted on glass in the upper register were the arms of France, England, Prince Maurice, the Dutch Republic, and the Republic’s seven provinces, and probably a twelve-line verse inscription commemorating the meetings.10

A copy of the Harvard drawing is in the Courtauld Institute Galleries, London.11

3 Most of the original drawings are signed and ten are consecutively numbered. The City Delivered, The Truce, and The Indian Homage, the latest subjects chronologically in the sequence, do not bear numbers; McGrath, p. 184.

5 Ibid., pp. 188–89 and 195. The building at the right edge of the composition is a bakery, as attested by the loaf on a shelf. The sign over this building shows an object in the shape of a crescent. Medals in the shape of a half moon were worn by the “sea beggars” (watergeuzen), the rebels who captured Den Briel in 1572; see http://en.wikipedia.org/wiki/Geuzen_medals (consulted 12 September 2013); see Gerard van Loon, Beschryving der Nederlandsche historipenningen: Of beknopt verhaal van’t gene sedert de overdracht der heerschappye van Keyzer Karel den Vyfden op Koning Philips Zynen Zoon, tot het fluyten van den Utrechtschen vreede, in de seventien Nederlandsche gewesten is voorgevallen (The Hague, 1723–31), vol. 1, p. 190; and the example in the Rijksmuseum, Amsterdam: http://hdl.handle.net/10934/RM0001.COLLECT.57547 (consulted 12 September 2013). However, the object on the sign is probably a bakery product, not a token of the revolt. 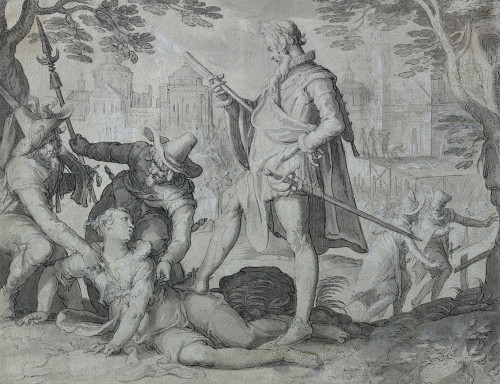 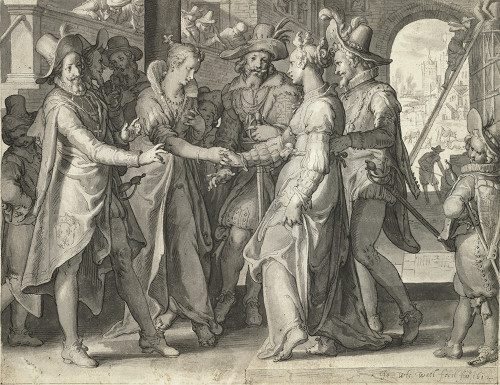