Simon de Vlieger’s interest in architectural subjects first became apparent in a group of drawings and etchings that date from the late 1630s, showing dilapidated city walls, gates, and towers. Although he based motifs in some of them on the ramparts of Delft, most of these picturesque townscapes probably depict invented, composite scenery.1 During the 1640s and early 1650s, he produced drawings of greater topographical fidelity, including several of ruined churches and castles.2 At least three represent the town of Weesp, which lies on the river Vecht, about ten miles southeast of the center of Amsterdam. De Vlieger purchased a house in Weesp on January 13, 1649, and resided there until his death in March 1653.3

The view of Weesp in the Harvard drawing was taken from the approach to the gabled Muiderpoort (Muiden Gate), which was accessible via the drawbridge at the far right. The vantage point encompassed the varied facades and bustling commercial activity on the Hoogstraat, the street that ran along the bank of the Vecht. De Vlieger executed at least two other drawings from the same location. A work in the Fondation Custodia, Frits Lugt Collection, Paris, shows the buildings along the Vecht that appear in the right half of the Harvard work (Fig. 1), and a sheet in the Amsterdam Museum extends the prospect downriver, including its opposite bank and the rest of the town to the distant fuller’s mill, nicknamed “De Stinkerd” (Fig. 2).4 The Paris and Amsterdam drawings, which are nearly identical in size, belonged to the same eighteenth-century collection and were once evidently regarded as pendants.5 Placed side by side, they show more or less the same prospect as the Harvard view and a 1645 painting by Isaack van Ruisdael (Fig. 3).6 A conspicuous detail documented in the Harvard and Paris drawings and the Ruisdael painting is the gradual deterioration of the wooden piles in the water before the semicircular bastion at the right. More or less intact in the 1645 painting, the piles show neglect in the Paris sheet, which may date from about 1650, shortly after De Vlieger settled in Weesp.7 The piles have nearly disappeared in the Harvard work, suggesting a date for the latter of about 1651–52. The tower of the fifteenth-century Sint Laurentiuskerk, which is visible in the painting by Isaack van Ruisdael (see Fig. 3) and in De Vlieger’s Paris drawing (see Fig. 1), is obscured in the Harvard view by the foliage of the tree that rises above the medieval bastion.8

View of Weesp exemplifies De Vlieger’s extraordinary technical accomplishment. In addition to the skillful handling of the chalk and wash throughout this large sheet, he improvised techniques that enhance the graphic vitality of selected details, such as the decorative stonework of the scrolled gable at the far right. Along the left side of the gable, De Vlieger left a reserve of untouched paper, which helps distinguish the motif from the surrounding walls and roofs, and he further enhanced contours of the gables by indenting them with a blunt point. These subtle interventions draw our attention to the intricate description of the scrollwork and other details on the facade. 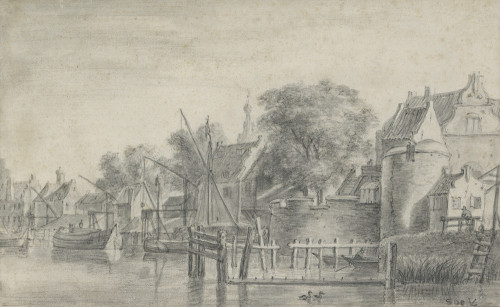 Fig. 1 Simon de Vlieger, View of Weesp with the Muiderpoort 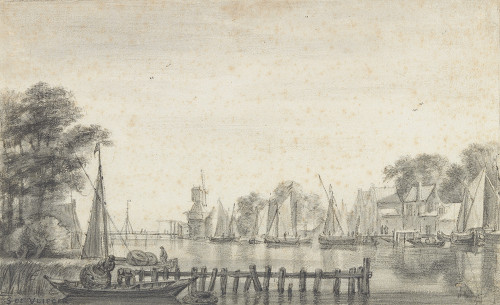 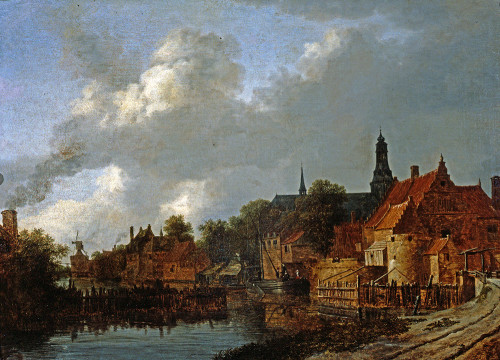