Catalogue entry no. 64 by Susan Anderson:

Little is known about the brief life and career of Isaac van Ostade, the younger brother and, according to Houbraken, the student of Haarlem’s master of the peasant genre, Adriaen van Ostade (see 1999.123.10, 2009.206 ).1 Although his career lasted just over a decade, Isaac developed a distinct style marked by a masterful incorporation of landscape into scenes of peasant life and a predilection for humorous representation of the lower classes.

Dated by Bernhard Schnackenburg to circa 1639–41, this drawing of children mocking a drunken woman represents the period immediately after Isaac’s apprenticeship, but before his first known activity as a professional painter, as recorded in the archives of Haarlem’s Guild of Saint Luke in 1643.2 Unlike in his earlier drawings, with their uniform use of the pen, diffuse compositions, and gruff peasant types, here he combines a more refined technique and a greater flair for theatricality to focus maximum attention on the hapless woman. The central characters appear in large scale, and the man in particular strikes an exaggerated pose, enhanced by a comical costume and facial expression. Descriptive detail diminishes toward the background, with abbreviated expressions on the broadly gesturing children and only a preliminary graphite sketch of foliage as a backdrop. The characteristically applied chalk washes attest to Isaac’s interest in color during this period, as he followed the lead of his brother, Adriaen, who had added watercolor to his drawings from the outset of his career.3

Isaac treated the subject, an inebriated woman vomiting, with a moralizing sense of comedy. As William Robinson has pointed out, the theme relates to overindulgence and its negative consequences, thereby cautioning the viewer to avoid the antagonism and shame suffered by Isaac’s protagonist.4 The artist repeated this suite of figures in the foreground of one of his expansive painted landscapes, which last appeared in the New York trade (Fig. 1).5 In the painting, Isaac included the sharp shadows cast by the figures’ feet and expanded the dramatic light across the entire group, setting them off against a more muted landscape backdrop. He also altered the poses and costume colors of the figures slightly, especially in the central pair, to make the man’s jacket blue instead of red and the woman’s cape a drab brown instead of blue. Most importantly, Isaac omitted the spewing vomit central to the drawing—leaving more ambiguous the source of the woman’s ridicule. A drawn copy of Harvard’s sheet appeared in the Munich trade in 1941.6

The drawing on the verso of this sheet is one of a small handful of Isaac’s rare early landscape studies.7 The tufty leaves and the schematic, rapidly drawn peasant house are typical of these sheets, as is the use of brown ink and wash. Isaac later refined this approach in subsequent masterful drawings of unpopulated exterior and interior scenes that show a more controlled use of the pen, greater level of detail, and frequent use of watercolor.8 His early compositional studies and landscapes, as embodied in the recto and verso of Harvard’s sheet, helped Isaac cultivate the mature paintings of exterior genre scenes for which he is best known.

2 Van Ostade’s earliest dated painting (whose dating itself would generally indicate independence from apprenticeship) is from 1639. On 31 January 1643, the rolls in the archives of Haarlem’s Guild of Saint Luke record a dispute between Isaac and a Rotterdam dealer, Leendert Hendricks. The two had entered into a contract more than two years prior (presumably in 1641) that had gone sour, and they ultimately turned to the guild for resolution. Although the date of Isaac’s formal entry into the guild remains unknown, his appearance here indicates he was a member by 1643. See Hessel Miedema, De Archiefbescheiden van het St. Lukasgilde te Haarlem, 1497–1798 (Alphen aan den Rijn, Netherlands, 1980), vol. 2, pp. 582–583 and 609; and Van Thiel-Stroman in Biesboer and Köhler, pp. 261–62.

5 Isaac van Ostade, Drunken Peasant Couple (Fig. 1), oil on panel, 34.2 × 47.6 cm, sold at Sotheby’s, New York, 26 January 2007, lot 437, repr. The painting was sold as “attributed to Isaac van Ostade,” but with a catalogue note citing Bernhard Schnackenburg’s opinion, based on photographs, that it was in fact an early work by Isaac himself. Before then, the work was known by a black-and-white photograph in the Rijksbureau voor Kunsthistorische Documentatie/Netherlands Institute for Art History (RKD), which recorded its presence with the Paris dealer J. O. Leegenhoek in 1950. In his 1981 monograph, in citing the 1950 image, Schnackenburg referred to the painting as attributed to Isaac (“eines Isack van Ostade zugeschriebenen Gemäldes”); see Schnackenburg, vol. 1, under cat. 421, p. 161. William Robinson, who saw the painting at the 2007 sale, also believes the painting to have a genuine signature and to be by Isaac himself. Based on the photograph, the present author concurs. 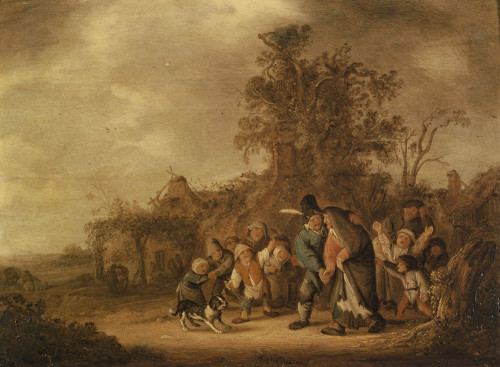