The son of an Amsterdam merchant, Jan de Bisschop attended the Latin School in his native city and, from 1649 to 1652, studied law at Leiden University. In 1652, he enrolled as an advocate at the Court of Holland, Zeeland, and West-Friesland in the Hague, where he practiced his profession for the remainder of his life. We know little about De Bisschop’s legal career, but the gifted amateur draftsman and printmaker ranked among the cultural elite of his generation.2 His publications of prints after ancient sculpture (Signorum veterum icones, 1669) and Italian Renaissance drawings (Paradigmata Graphices variorum artificum, 1671) helped propagate the classicist taste that prevailed in the Netherlands during the last third of the seventeenth century. De Bisschop designed and etched the plates in both volumes.3 In addition to his studies after antique sculpture and Italian drawings, De Bisschop drew landscapes, copies after paintings by Italian and Northern masters, and a few original portraits, genre scenes, and title pages.4 More than five hundred of his drawings survive.5

De Bisschop probably learned to draw in the middle 1640s from Bartholomeus Breenbergh, whose studies of Rome and its surroundings influenced generations of French and Dutch draftsmen who strove to capture the light and grandeur of the Italian countryside. Breenbergh must have taught him to exploit the contrast of the washes and reserved areas of paper to evoke spatial depth and convey the effect of bright sunlight and rich, subtly gradated shadows.6

De Bisschop’s landscape drawings range in date from 1648 to the 1660s.7 Many depict views in and around Leiden and the Hague, the cities where he spent his entire adult life. Houses and a Well near Koudekerk is an early work, probably executed at the beginning of the 1650s.8 The artist’s inscription By Kouwkerk (“near Koudekerk”) on the verso of the sheet locates this site near Koudekerk aan den Rijn, a village on the north bank of the Oude Rijn (“Old Rhine”) about ten kilometers east of Leiden.9 Over an extensive preliminary sketch in a granular black chalk, he finished the drawing with a brush in layers of brown and gray wash, making limited use of the pen. Its technique recalls his handling of several landscapes from the early fifties, including two views, dated 1650 and 1652, near Huis ten Deyl, a castle located between Leiden and the Hague (Figs. 1, 2).10

The Harvard work exemplifies the judicious refinement that characterizes De Bisschop’s landscape drawings. In the preface to Paradigmata Graphices, he explicitly deplores the unmediated naturalism of Dutch art, including the “tumbledown buildings” and “bare, crooked, misshapen trees” that feature in landscapes by his compatriots.11 His choice of motifs reflects his preference for a stately, harmonious landscape art. He favored Italian vistas with Roman ruins copied from drawings by Breenbergh and others who had traveled to Italy; Dutch views of topographical interest, such as country houses, city walls, and gates; and the type of sunny, congenial rustic scene that he depicted in Houses and a Well near Koudekerk.

In the early eighteenth century, the Delft collector Valerius Röver (1686–1739) assembled at least eighty-four of De Bisschop’s landscapes, including the present work. When Röver mounted the drawings in albums, he provided them with captions by transcribing in an elegant hand the topographical notes De Bisschop had scribbled on the versos. After Jonkheer Johann Goll van Franckenstein (1722–1785) acquired the drawings from Röver’s widow, they were remounted and Röver’s captions were cut out and adhered to the backs of the original sheets. A small paper strip inscribed in Röver’s hand, By Coukerck [sic], remains affixed to the verso of the Harvard work, and Röver’s captions have been preserved with several other De Bisschop landscapes.12

1 (This note refers to the provenance.) Although many drawings by De Bisschop appear in the Goll sale of 1 July 1833 (L. 13358), this sheet cannot be firmly matched with any lot description.

9 Formerly known simply as Koudekerk, the village was officially named Koudekerk aan den Rijn in 1938 to distinguish it from the village of Koudekerke on the (then) island of Walcheren in Zeeland.

12 For example, the drawing reproduced in Fig. 1 (see n. 10), as well as in Ben P. J. Broos and Marijn Schapelhouman, Oude tekeningen in het bezit van het Amsterdams Historisch Museum, waaronder de collectie Fodor: Nederlandse Tekenaars geboren tussen 1600 en 1660, (Amsterdam and Zwolle, Netherlands, 1993), cats. 27 and 28, pp. 42–44, and cat. 30, pp. 46–47 (nn. 11–12). Röver filed his drawings by De Bisschop in albums (Kunstboeken) numbered 17 to 19. The inscription of the numeral 17 on the paper inlay on the verso of the Harvard sheet postdates Röver’s ownership, but it might refer to his album 17, which contained eighty-four drawings by De Bisschop, nearly all of them landscapes. 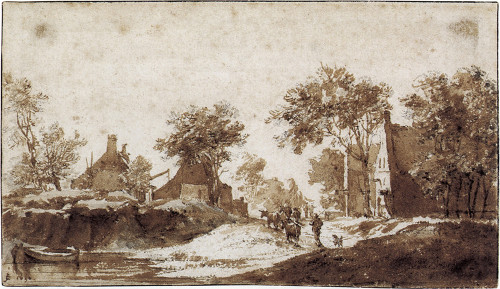 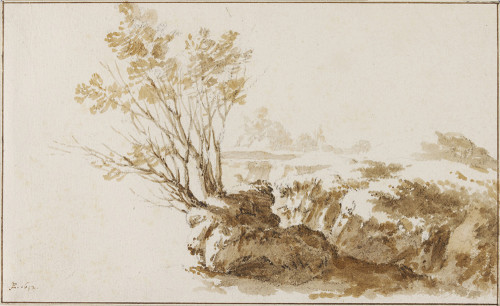