[1] In his dissertation of 1972, Wolfgang Schulz gave the Tonneman provenance to the prototype for this drawing, done during Doomer's travel years (Paris, Petit Palais, Dutuit collection, inv. no. 1107; Schultz cat. no. 202, p. 317). Frits Lugt also gave this erroneous provenance in Dessin d'ecole du Nord of 1927 (cat. no. 21).

[2] Erroneously numbered as lot 1126j; as part of a portfolio of 11 drawings of views in France, especially Nantes.

Doomer journeyed to France in 1645 and stayed a few months in Nantes, where two of his brothers established a trading business. On July 3, 1646, he departed from Nantes with the landscapist Willem Schellinks. The two artists traveled along the Loire to Orléans, then turned northward and reached Paris on August 10. In early September, they embarked on their return trip to the Netherlands, following the Seine to Le Havre, where they boarded a vessel bound for Rotterdam.2 Doomer returned home with dozens of studies in black chalk of cities, towns, churches, chateaux, harbors, bridges, and industrial and agricultural enterprises. Responding to the burgeoning interest in topographical images, he used these sketches as the basis for finished ink-and-wash drawings.3 While many of the latter survive, some in two or more versions, few of the sketches have come down to us.4

En route from Paris to Le Havre, Doomer and Schellinks stayed about two weeks in Rouen, “seeing the city on the inside and outside, walking everywhere,” as Schellinks noted in his journal.5 The sketches Doomer made in Rouen have not come to light, but he developed two of them into finished compositions: an unidentified View in the City of Rouen recorded in the catalogue of the 1754 auction of drawings owned by the Amsterdam collector Jeronimus Tonneman; and View of Rouen with Mont Sainte-Catherine, of which two versions survive. One of the latter is the Harvard drawing. It was also in Tonneman’s collection and immediately followed the lost View in the City of Rouen in the 1754 sale.6 Tonneman’s views of Rouen belonged to an extensive series executed in the same media and meticulous technique on uniform sheets of ledger paper marked by three ruled pen lines.7 He owned 139 of these drawings, of which more than 80 depicted views in France, and the remainder sites in the Netherlands and Germany.8 The homogeneity of the drawings on ledger paper suggests that a collector commissioned from Doomer—probably during the 1670s—new, finished versions of a large selection of his topographical studies.9 Tonneman, born in 1687, could not have been the original patron, but the drawings evidently remained together until the 1754 sale.10

The earlier version of View of Rouen with Mont Sainte-Catherine (Fig. 1) belongs with several other French landscapes to a discrete group, datable to the late 1640s or early 1650s, that Doomer executed in a more robust technique than in the refined replicas on account-book paper.11 Apart from the scale of the walking man on the right, the details of the two versions correspond closely.

The view recorded in the two drawings is from the south bank of the Seine, looking east. In the middle of the river are remnants of the Pont Mathilde, which, before it was washed away in 1564, had terminated in the Barbacane, the large fortified gate at the right of the drawing. Here, the wooden bridge that had replaced the Pont Mathilde crosses the Seine behind the ruined pilings. Only a small section of the old city is visible at the left. Mont Sainte-Catherine, named after a relic of Saint Catherine of Alexandria housed in an eleventh-century church on its slope, rises in the distance.12

6 Sale, De Leth, Amsterdam, 21 October 1754 and following days, Kunstboek R, lots 40 and 41: “Een gezigt in de Stad Rouaan” and “Een dito, met den Berg St Catharina.” See “Provenance” and note 1, and Alsteens and Buijs, p. 183. Some drawings from the Tonneman sale remain on their eighteenth-century mounts, which are inscribed with the lot numbers, thus confirming their presence in Tonneman’s collection. Alsteens and Buijs, p. 36. When it appeared at auction in Amsterdam in 1974, the Harvard drawing was still on the eighteenth-century mount inscribed with its Tonneman lot number, 41.

9 See Alsteens and Buijs, p. 34, for the dating of the drawings on account book paper. 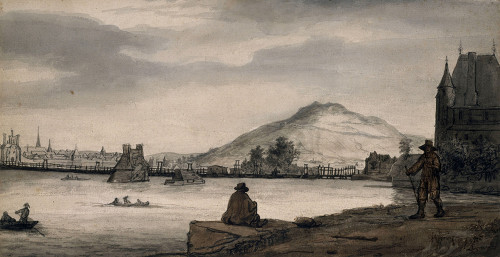