Catalogue entry no. 3 by Susan Anderson:

This drawing of a seated woman with a fur-trimmed jacket belongs to a group of single female figure studies by Cornelis Bega.1 Best known for his genre paintings in the vein of his probable master, Adriaen van Ostade (1999.123.10 and 2009.206), Bega also deserves acclaim for his participation within a larger milieu of Haarlem artists who were active during the middle of the seventeenth century and interested in figural drawing. Those contemporary with Bega included Gerrit Berckheyde (2009.207), Leendert van der Cooghen (1951.3), Cornelis Visscher, Salomon and Jan de Braij, and Dirck Helmbreeker. Bega, Berckheyde, and Van der Cooghen, among others, appear to have shared models, sometimes during the same drawing session.2 Their drawings may be recognized by their meticulous use of contour and hatching to delineate the human form.

Bega’s inheritance, via his mother, of Cornelis Cornelisz. van Haarlem’s estate included paintings, prints, and all of that artist’s red chalk drawings, mostly figural and anatomical.3 Although no cohesive body of figure studies survives from the socalled Haarlem Academy of Hendrick Goltzius, Karel van Mander, and Cornelisz. van Haarlem—formed during the last years of the sixteenth century to draw naer het leven (from life)—we may infer that Bega took an interest in his grandfather’s figural drawings and working methods. Further influence may have come from any number of his artistic family members, including his father, Pieter Jansz. Bagijn, a gold- and silversmith, in addition to his presumed apprenticeship under Haarlem’s reigning practitioner of lowlife genre, Adriaen van Ostade. Bega also joined Vincent Laurensz. van der Vinne (1628/29–1702) for a trip to Germany and Switzerland in 1653 (accompanied for part of the journey by Guillam Dubois and Dirck Helmbreeker), returning over a year before joining Haarlem’s Guild of Saint Luke, the painters’ guild, on September 1, 1654. According to Arnold Houbraken, Bega’s short life ended in 1664 after he contracted the plague.4

Among Bega’s female figure studies, our sheet belongs to a subgroup of over a dozen in black and white chalk on colored paper.5 Mary Ann Scott dates this Study of a Woman, like the majority of these drawings, to circa 1661–64, Bega’s final years. Typical of this group, the black and white chalk is applied here in a spontaneous and gestural manner well suited to capturing the shimmering effects of light on flesh and costume. The lightly drawn ancillary figure at the upper right shows the same model in profile, but without facial features. A similar approach is seen in a Seated Woman at the Metropolitan Museum of Art, where two renditions of the same figure, one more detailed than the other, appear on a single sheet,6 suggesting that Bega sometimes used these drawings to test more than one pose without committing to a thorough drapery study in each figure. The same model and costume appear in several other drawings by Bega: a Seated Woman Facing Left and a Sleeping Woman, also in black and white chalk on blue paper, and a Seated Woman in red chalk on off-white paper.7 In the last, the model appears meticulously drawn both in full length and in a smaller head study at the upper left.

Although Scott believed there to be no indisputable cases where Bega transferred a drawn female figure directly to a painting, Baukje Coenen has discovered multiple instances where he did so, transforming our understanding of these sheets from purely academic exercise to a more nuanced range of functions, including painting preparation. The costume and general pose seen here appear in several paintings of procuresses or mothers by Bega or members of his circle. The costume elements and pose most closely resemble the female figure in Peasant Family: a seated mother wearing a fur-trimmed jacket, linen bodice, and headdress, who cradles her infant in her arms while a man raising a glass looks on (Fig. 1).8

8 Attributed to Cornelis Bega, Peasant Family (Fig. 1), oil on panel, 41 × 35 cm, private collection, Austria (Scott, cat. 63; Van den Brink et al., repr. cat. 63b, p. 227). Although the painting is reportedly signed and dated 1661, Peter van den Brink is uncertain of the attribution; but if done by a follower, it is testament to the drawing’s importance to Bega and his immediate milieu. 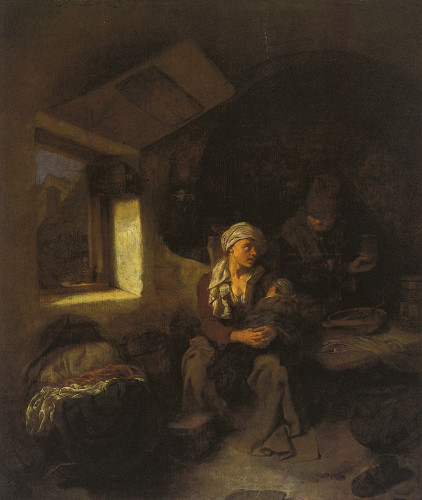