The most original and versatile landscapist of the Dutch Golden Age, Jacob van Ruisdael produced a large oeuvre of some seven hundred pictures.2 His work left an indelible mark on nearly every category defined by Wolfgang Stechow in his classic study of seventeenth-century Dutch landscape painting: dunes and country roads; rivers and canals; forests; imaginary alpine and Nordic views; panoramas; winter scenes; beaches; townscapes; and marines.3

About 140 drawings by Van Ruisdael have come down to us.4 Most are executed in black chalk or black chalk and gray wash. They include summary sketches from nature as well as more carefully finished sheets that might have been intended for sale or simply as a detailed record of a motif. About thirty may be characterized as preliminary studies for painted compositions, and six served as models for Abraham Bloteling’s etched views of Amsterdam and the Portuguese-Jewish cemetery at Ouderkerk.5

The Harvard drawing belongs to a group of more than thirty sketches by Van Ruisdael that are closely related in format, composition, and technique. Nearly all of these sheets originally measured approximately 150 × 200 mm and were executed primarily in black chalk, in some cases worked up with ink or a light gray wash. A few were embellished with gray wash by a later hand. None bear autograph dates, but they can be assigned to the period from about 1648 to the middle of the 1650s.6 Some represent identifiable sites in or near Amsterdam, where Van Ruisdael—who spent the first decade of his career in his native Haarlem—settled by June 1657.7 The attribution of the group to Van Ruisdael rests on secure foundations: three sheets are signed with the artist’s monogram (Fig. 1), and he adapted the compositions of four others for paintings.8 At least seventeen of the black-chalk sketches—about half of those that survive—remained together after the artist’s death; they were annotated in ink, J. Ruijsdael, by the same dealer or collector. The inscription, which appears at the lower right of the Harvard sheet, dates from before circa 1690.9

The Harvard sketch, with its densely packed composition, close view of the main motif, and loose handling of the chalk, is a characteristic example of this group of Van Ruisdael’s drawings. At the left, a cottage nestles behind a bank, nearly obscured by trees and bushes. Two figures trudge along the road, which skirts a pool of water in the center foreground. Van Ruisdael evoked the translucency of the clouds and shadows by dragging the soft chalk over the uneven surface of the paper, and in some shaded areas by blending the strokes into a continuous gray tone. Scattered dark accents added with a sharper chalk emphasize prominent details, such as the birds, brush, and fallen tree in the left foreground and the branches and leaves of the central trees. The saw-tooth lines with which he outlined the foliage are a recurrent technical trait of the artist’s black-chalk sketches.

Seymour Slive proposed that the Harvard drawing belongs among the earlier works in the group and probably dates to the late 1640s. As evidence of the dating, he cited the close view and diagonal organization of the landscape; the convoluted foreground motifs; the airy, atmospheric effects; and the absence of the structural accents that occur in the later sketches.10

1 (This note refers to the provenance.) Seymour Slive, Jacob van Ruisdael: A Complete Catalogue of His Paintings, Drawings, and Etchings (New Haven, Connecticut and London, 2001), p. 492, on the “J Ruijsdael Collector.” 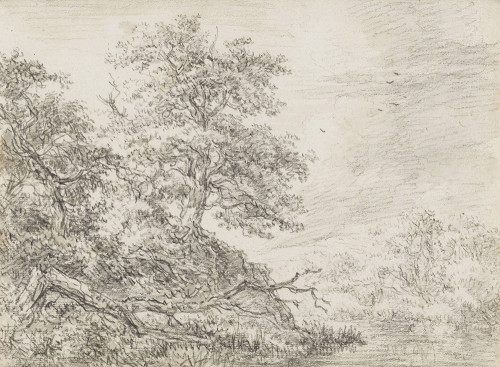