When this impressive drawing came to light in a 1994 New York auction, it was sold with the attribution “Circle of Adam Elsheimer.” In his entry in the sale catalogue, Gregory Rubinstein suggested that it might be by the Dutch draftsman and printmaker Hendrick Goudt, Elsheimer’s patron and the author of seven celebrated engravings after pictures by the German master.1 Comparison of the present sheet with two studies by Goudt of a nude female model—one of which is in the Maida and George Abrams Collection (Fig. 1)—confirms that the Temptation of Jesus can be assigned to him with confidence.2 Its technique is identical to that of the life studies: rigorously methodical cross-hatching to model the darker areas and neat, disciplined parallel lines for the middle tones. The clothing in The Temptation of Jesus and the flesh of the model’s body in the nudes display hard, faceted surfaces, which Goudt evoked through the stark contrast of the densely applied pen work and the large, planar reserves that represent eye-catching highlights. The lapidary surface effects and systematic technique of the drawings derive from engravings of the 1590s by Hendrick Goltzius.3 Following the lead of Goltzius and other draftsmen in his circle, such as Jacques de Gheyn II and Jan Harmensz. Muller, Goudt adapted the linear vocabulary of Goltzius’s engravings to produce virtuoso pen drawings.

Goudt’s earliest documented work is a painstaking pen-and-ink copy after an engraving by Lucas van Leyden. It is signed and dated 1600, when the artist was sixteen or seventeen years of age.4 The Temptation of Jesus and the two nude studies probably also date from the first years of the seventeenth century.5 We have no documentation of the artist’s training, but in addition to the influence of Goltzius’s engravings, Goudt’s drawings are indebted to the work of Jacques de Gheyn II, who might have been his teacher.6 De Gheyn settled in 1601 in the Hague, where Goudt presumably resided, and Goudt’s mature studies attest to his familiarity with De Gheyn’s drawings of around 1600.7

The Harvard drawing illustrates an event related in the gospels of Saint Matthew (4:1–4) and Saint Luke (4:1–4). Following his baptism, Jesus fasted for forty days in the desert. The devil tempted him three times. At his first appearance he said to Jesus, “If thou be the Son of God, command that these stones be made bread.” In Goudt’s drawing, Satan points to the stone held in his right hand as he listens to Jesus’s reply: “It is written, Man shall not live by bread alone, but by every word that proceedeth out of the mouth of God” (Matthew 4:4). In accordance with a Renaissance iconographic tradition, the tempter disguises his true identity by wearing a monk’s habit.8

5 Joachim Jacoby (Die Zeichnungen von Adam Elsheimer: Kritischer Katalog, Frankfurt am Main: Städel Museum, Frankfurt am Main, 2008, p. 249) sees in the distant landscape at the upper right of the Harvard drawing the influence of Elsheimer’s landscapes, which would indicate a date during or after Goudt’s sojourn in Italy. However, the tight, rhythmic pen work of this passage seems closer to landscape drawings of the 1590s by Goltzius and De Gheyn (Emil Karel Josef Reznicek, Die Zeichnungen von Hendrick Goltzius, Utrecht, 1961, cat. 393, dated 1596; I. Q. van Regteren Altena, Jacques de Gheyn: Three Generations (The Hague, Boston, and London, 1983, cat. 977, dated 1599). This, combined with the very De Gheyn–like handling of the pen in the figures, suggests to me that the Harvard drawing dates from the first years of the seventeenth century and before Goudt’s departure for Italy in 1604. 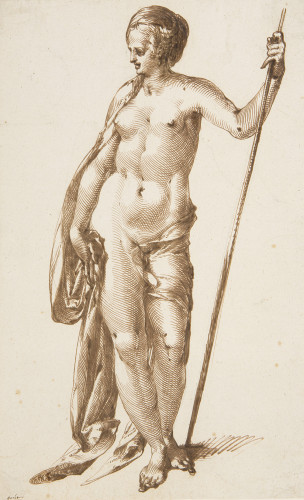