Adriaen van Ostade sketched this seated drinker in an album of fifty-two vellum leaves of uniform size in a plain black leather binding. Forty-one full-page drawings are executed directly onto the bound sheets—some on the recto, some on the verso of a leaf. They include signed or securely attributed works by twenty-seven draftsmen, whose contributions illustrate subjects ranging from mythological themes to genre scenes, landscapes, single figures, heads, animals, and still lifes. In addition to Adriaen van Ostade, other outstanding Dutch painters are represented, such as Govert Flinck, Jan van Goyen, Simon de Vlieger, Cornelis Saftleven, Emanuel de Witte, and Leonaert Bramer. Seven artists contributed two drawings apiece, and two—De Vlieger and Joris van der Haagen—executed three each.1 Preserved within the album are the only drawings known today by several masters, including De Witte, Christiaen van Couwenbergh, and Willem van Aelst.2 Ten sheets, scattered throughout the volume in no discernible sequence, bear dates from 1635 to 1641.3 The authors of two drawings remain unidentified, and a few pages bear indecipherable scribbles or childish doodles.

We know little of the album’s provenance between the seventeenth century and its appearance on the London art market in 1987.4 Circumstantial evidence suggests that its original owner resided in Delft or the Hague, and its binding may provide conclusive proof of his identity. A dozen of the identified draftsmen worked in Delft, and a majority lived there or a few kilometers away in the Hague when they executed their drawing(s) in the book.5 The raised bands on the spine and dyed black leather of the binding match those of more than twenty albums of various sizes that are stamped with the year 1637, although the Harvard volume lacks the dates and gold-tooled Dutch titles that decorate the larger “1637” portfolios.6 The owner of those albums was very likely Pieter Spiering (c. 1595–1652), who from 1630 managed the sales and finances of the Delft tapestry works founded by his father, and who later served as Swedish resident in the Hague and purveyor of art to Queen Christina.7 To the art historian Joachim von Sandrart, who knew him, Spiering was a “world-famous” connoisseur, whose “incomparable” collection included drawings by Albrecht Dürer, Raphael, Giulio Romano, Titian, and Paolo Veronese, and a complete oeuvre of “the most perfect impressions” of Lucas van Leyden’s prints.8 When Nicodemus Tessin the Younger visited Spiering’s heir in 1687, she still owned more than a hundred albums of drawings and prints.9 That Spiering also supported artists of his own time is attested by the impressive marble busts of himself and his wife that he commissioned from François Dieussart as well as the annuity he paid to Gerrit Dou for the right of first refusal to purchase that Leiden master’s paintings.10 If the binding of the Harvard album strongly suggests its provenance from Spiering’s collection—and this seems probable, although not certain—it has led us to the volume’s most likely owner. Not only did Spiering reside in both Delft and the Hague, but his collection and reputation as a patron would have attracted the local and visiting artists who contributed drawings to the book. The purpose of this unique volume was likely similar to that of a friendship album or album amicorum, although it consists entirely of drawings and lacks the textual components that were an essential feature of an album amicorum of the period.11

The Haarlem painter of peasant genre subjects Adriaen van Ostade is, as far as we know, the only artist from that city whose work appears in the album. The vigorous zigzag lines that shade the figure and stool in this signed drawing of a seated peasant holding a jug and pipe are comparable to the modeling strokes in his impressive figure studies in black chalk on blue paper, the earliest of which date from the middle 1640s.12 However, the jagged contours, pose, and exaggerated coarseness of the features imply an earlier date, which is supported by comparison with a similarly reclining toper in a painting dated 1637 (Fig. 1).13 A second drawing in the album, although unsigned and perhaps unfinished, is identical in technique to Seated Peasant Drinking and unmistakably also the work of Adriaen van Ostade (Fig. 2).14

4 The album was certainly in the United Kingdom in the nineteenth century. Printed texts pasted down on the inside front cover of the binding, although only partially preserved, attest that the album was included in a (book?) sale in the United Kingdom, which, to judge from the language and the typeface, evidently took place in the late eighteenth or early nineteenth century. One lot description must refer to this album. Its decipherable text reads: A volume of Original D[rawings?] . . . em . . ne[nt?] [= eminent?] / . . . °f the Flemish School done upon Vellum / This Bijou may justly merit a distinguished p[lace?] [in the?] / Cabinet of the most fastidious Connoisseur . . . . Pasted directly beneath this text is another printed lot description, presumably from the same sale catalogue, that refers to a red morocco–bound copy of Jean de la Fontaine, Contes et nouvelles en vers, “Amsterdam” (i.e. Paris, Barbou), 1762, with eighty engraved plates after drawings by Eisen—the so-called “Fermiers Généraux” edition.

5 As many as nineteen of the identified artists worked in Delft or the Hague in the 1630s and early 1640s. Of those, the majority (twelve) are recorded in Delft during that period. Michiel Plomp has studied the importance of the album for our knowledge of drawing in Delft; see Plomp in Liedtke et al., pp. 175, 182, 185–88, and 440–43.

6 On the 1637 albums, see Jan Gerrit van Gelder and Ingrid Jost, Jan de Bisschop and His “Icones” and “Paradigmata,” (Doornspijk, 1985), pp. 200–205; John Rowlands, Drawings by German Artists and Artists from German-Speaking Regions of Europe in the Department of Prints and Drawings in the British Museum: The Fifteenth Century, and the Sixteenth Century by Artists Born before 1530 (London, 1993), vol. 1, pp. xi–xiv; Th. Laurentius, Tekeningen, prenten en kunstboeken (Middelburg, Netherlands, 2009), cat. 68, pp. 58–59. Egbert Haverkamp-Begemann (in correspondence with the author, 4 February 1988) first noted a possible connection between the album then in the Abrams collection and the 1637 volumes. In 2002, when the Abrams album was exhibited at the Fondation Custodia, Frits Lugt Collection, Paris, Mària van Berge-Gerbaud, Hans Buijs, and Stijn Alsteens (in conversation with the author) compared its binding to those on the three 1637 albums in the Fondation Custodia’s collection and agreed on the close similarity between the album’s cover and those on the two 1637 volumes.

7 Van Gelder and Jost, pp. 200–5; Rowlands, vol. 1, pp. xi–xiv; Laurentius, cat. 68, pp. 58–59. As noted by Van Gelder and Jost as well as Rowlands, Sandrart cited in Spiering’s collection a specific group of drawings by Heinrich Aldegrever that were certainly preserved in one of the 1637 albums in the British Museum. In my view, this is compelling evidence that Spiering was the owner of the 1637 albums. Sandrart knew Spiering when the artist was in the Netherlands from 1637 to 1645.

11 For the character and history of the album amicorum in the Netherlands in the sixteenth and seventeenth centuries, see Kees Thomassen et al., Alba Amicorum: Vijf Eeuwen Vriendschap op Papier Gezet; Het Album Amicorum en het Poëziealbum in de Nederlanden (The Hague: Rijksmuseum Meermanno-Westreenianum, Huis van het Boek, 1990), pp. 9–19, and nos. 1–64. A drawing by Leonaert Bramer in the Harvard album that represents an elderly couple singing or reading does include the text of a poem or song about medicine and its powers. However, there is no evidence that it refers in any way to the owner of the volume. 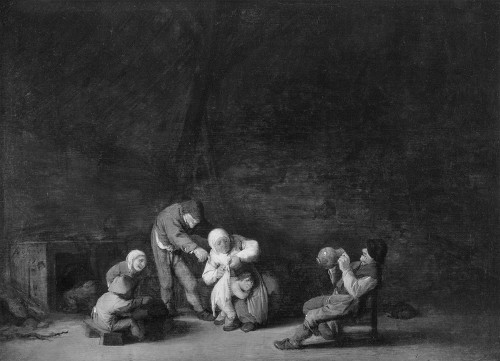 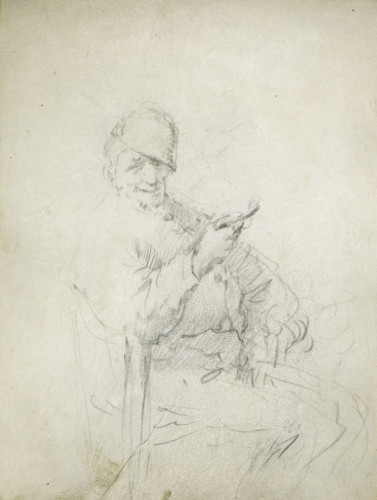 Description
This sheet forms part of a seventeenth-century Dutch album, in its original binding, which contains 41 small, full-page drawings on parchment by more than 27 different artists.

Stijn Alsteens, [Review] William W. Robinson, with Susan Anderson, "Drawings from the Age of Bruegel, Rubens, and Rembrandt: Highlights from the Collection of the Harvard Art Museums" (Winter 2015), p. 532