Karel van Mander is best known as the author of Het Schilder-boeck (Haarlem 1604), which combines a treatise in verse on the theory and practice of painting, commentary on Ovid’s Metamorphoses and other iconological material, and biographies of ancient and modern painters. His lives of Netherlandish and German masters—from the Van Eycks to his contemporaries Bartholomeus Spranger (1983.142), Hendrick Goltzius (1999.141), and Cornelis Cornelisz. van Haarlem—remain an essential source for the study of fifteenth- and sixteenth-century art in northern Europe.

Van Mander traveled in Italy from 1573 to 1577, meeting Spranger and other northern and Italian artists in Rome.2 In 1583, he left the southern Netherlands and settled in Haarlem. He introduced Goltzius to drawings by Spranger, whose example precipitated the distinctive late mannerist style developed by Goltzius, Cornelis Cornelisz., Abraham Bloemaert (25.1998.1 and 1999.130), Joachim Wtewael (1999.183), and Van Mander himself.3

The majority of Van Mander’s works date from 1587 to 1604.4 About thirty paintings are securely attributable to him, and others are mentioned in seventeenth-century inventories.5 During his Haarlem years, Van Mander was also a prolific designer of prints. Engravers such as Jacques de Gheyn II, Jacob Matham, and Jan Saenredam produced 170 plates after his designs.6 Of approximately eighty-five drawings attributable to Van Mander, nearly half are preparatory for prints.7 As Marjolein Leesberg suggested, he must have intended the Virgin of Sorrows to serve as the model for an engraving, although no related print is known, the outlines were not incised, and the verso was not blackened to facilitate transfer of the design to a copper plate.8 The fully resolved composition, clearly defined contours in brown ink, and dramatic shadows and highlights produced by the painterly blending of gray and brown washes and white opaque watercolor are characteristic of the models Van Mander furnished to printmakers.9 Leesberg cited five other drawings he evidently prepared for prints—four of them indented and/or blackened on the verso—that were never executed or whose corresponding prints remain unidentified.10 On the other hand, many of his drawings reproduced in engravings show no evidence of mechanical transfer to the plate.11 Leesberg dated the Harvard work to the early 1590s, comparing it to the finished designs for a series of six prints representing proverbs (Fig. 1).12

The subject of the drawing originated in the devotional cult of the Seven Sorrows of the Virgin, which was especially popular in the Netherlands in the late fifteenth and early sixteenth centuries.13 Simple images of the Mater Dolorosa show her with seven swords piercing her breast, while in others a large-scale figure of the Virgin, pierced by one sword or seven, is surrounded by small narrative scenes illustrating the events from the life of Christ that comprise the Seven Sorrows.14 The swords not only stand for the Seven Sorrows but embody the belief that Mary suffered the agonies of Christ’s Passion with him.15

The devotional subject is exceptional in Van Mander’s oeuvre, although paintings by him of the Madonna are recorded in inventories.16 His composition recalls prints published by the Wierix family in Antwerp in the 1580s that show the Mater Dolorosa seated at the foot of the cross with Jerusalem in the background (Fig. 2).17 In Van Mander’s emotionally expressive interpretation, the voluminous, dynamic drapery with taut contours and deeply indented folds reflects the Virgin’s inner distress.18

4 Van Mander/Miedema, vol. 2, pp. 105–67, catalogues all the “more or less certain” paintings and drawings by Van Mander and the prints and tapestries after his designs. Leesberg (1993–94) is a study of Van Mander’s paintings. In New Hollstein, Karel van Mander, Leesberg catalogues the prints after Van Mander, and in pp. lxxxv–cx, nos. 1–35, the drawings related to prints.

7 Ibid., p. lxxxv. In correspondence with the author, 2 June 2008, Leesberg noted that additional drawings by Van Mander have come to light since 1993, and she now attributes some eighty-five drawings to him.

8 Leesberg in correspondence with Edward Wouk and the author, 15 May and 2 June 2008.

9 All the surviving drawings by Van Mander that served as models for printmakers are catalogued and reproduced by Leesberg, nos. 1–35, pp. lxxxvi–cx.

12 Marjolein Leesberg in correspondence with the author, 2 June 2008. The Scales of Marriage (Fig. 1) is in brown ink, brown wash, and white opaque watercolor. 219 × 169 mm. Vienna, Graphische Sammlung Albertina, 8011; Leesberg in New Hollstein, Karel van Mander, no. 24, p. xcviii, repr. p. c. Leesberg dates the drawing and the related print circa 1592. Also closely comparable to the Harvard work are drawings of Saint Luke and Saint John the Evangelist, which are incised for transfer, but no prints after them are known; ibid., nos. 20 and 21, pp. xcv–xcvi, repr. Leesberg also dates these drawings circa 1592. 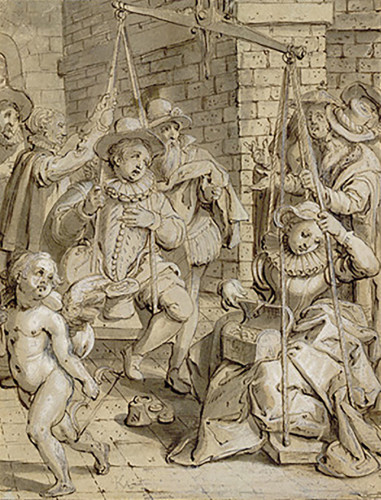 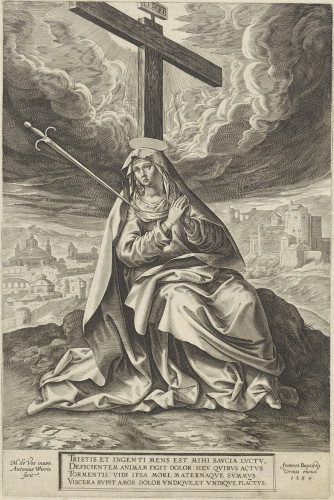