NOTE: The sequence to Franz Koenigs directly from the auction at Muller's is not proven. The drawing may have bought in at that sale and then sold to Koenigs.

When Jesus was twelve years old, Joseph and Mary took him to Jerusalem to observe the feast of the Passover. Unnoticed by his parents, Jesus remained behind when they departed on their homeward journey to Nazareth. Returning to Jerusalem, they searched for three days until “they found him in the temple, sitting in the midst of the doctors, both hearing them and asking them questions. And all that heard him were astonished by his understanding and answers” (Luke 2:41–50). The theme of Jesus’s disputation with the scholars in the temple occurs frequently in late medieval and Renaissance art, particularly in cycles devoted to the Life of the Virgin and the Seven Sorrows of the Virgin.1

Although the style and technique of Christ Disputing with the Doctors in the Temple relate it to works by Jan Gossart from the first decade of the sixteenth century, the drawing is not by Gossart but by a close follower. As Gregory Rubinstein and Stijn Alsteens have noted, the systematic parallel and cross-hatched strokes recall the refined pen work in The Mystic Marriage of Saint Catherine (c. 1503–8) in Copenhagen, Gossart’s earliest surviving work (Fig. 1).2 The putti that support the corbels at upper left and right resemble those in a capital in the right background of the Copenhagen drawing, and the putto at the top center of the Harvard sheet mimics those perched on the architectural frame above the statue of Moses in Gossart’s composition. The poses, gestures, and scale of the figures in the Harvard work are closer to a slightly later Gossart drawing, Emperor Augustus and the Tiburtine Sibyl in Berlin.3 Compared to the supple, varied strokes of the Berlin sheet, the lines in the Harvard work are more homogeneous, precise, and delicate, and the modeling of the figures and architecture lacks the breadth and fluidity imparted by Gossart’s robust handling of the pen.4

The unidentified draftsman of the Harvard composition imitated the eclectic, imaginatively combined decorative and architectural elements found in Gossart’s drawings, but modeled the temple interior on Albrecht Dürer’s Presentation of Christ in the Temple from the woodcut series Life of the Virgin (Fig. 2).5 The figure with the dangling sleeve and his arm around the column in the left foreground also derives from Dürer’s print, which was issued in proof impressions about 1505, before the series appeared in book form in 1511. The sheaves suspended from the ceiling and the round window in the rear wall are based on Dürer’s Christ Disputing with the Doctors in the Temple in the same series, where Jesus also appears as a diminutive figure deep within the temple space and astonished listeners occupy the immediate foreground.6

Harvard’s Christ Disputing with the Doctors in the Temple presumably dates from about 1505–10, roughly the same time as the drawings by Gossart to which it responds. Gossart joined the Antwerp Guild of Saint Luke in 1503 and maintained his workshop in that city until he departed for Italy in October 1508. Guild records document that he registered two apprentices, Hennen Mertens in 1505 and Machiel in’t Swaenken in 1507. Hennen Mertens was almost certainly identical with Jan Mertens van Dornicke, the future father-in-law of artist Pieter Coecke van Aelst. According to some scholars, Jan Mertens van Dornicke produced the large oeuvre of paintings and several drawings attributed to the so-called Master of 1518. None of those drawings closely resemble Christ Disputing with the Doctors in the Temple, although the works attributed to the Master of 1518 probably date from at least a decade later than the Harvard sheet.7 Gossart’s output before 1508 contributed to the development of the style known as Antwerp mannerism, which was practiced by several workshops in the city during the second and third decades of the century.8 Like Gossart’s early drawings, the Harvard composition anticipates salient characteristics of Antwerp mannerism, including the fancifully arranged decorative elements, expressively posed figures, and elaborate costumes and headgear. Dan Ewing singled out the pronounced bilateral symmetry of the composition and the monumentality of the architectural forms—particularly the massiveness of the columns and plinths—as original, distinctive elements of the drawing within the context of Antwerp art of the period.9

Alsteens proposed that Gossart’s works in Berlin and Copenhagen—which, in addition to being meticulously executed virtuoso performances, are both signed by the artist—might be early examples of finished drawings made for collectors.10 Although not signed, Harvard’s Christ Disputing with the Doctors in the Temple is also a formal, flawlessly worked composition drawn on a large sheet of parchment, a more valuable support than paper. It could also have been an autonomous drawing intended for sale.

4 This is also the opinion of Rubinstein and Alsteens (see n. 2 above). 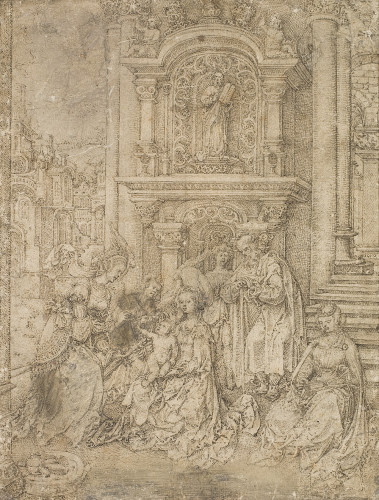 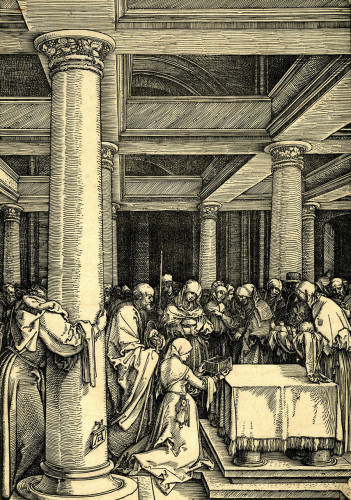 Fig. 2 Albrecht Dürer, Presentation of Christ in the Temple from the woodcut series Life of the Virgin