1. Cronesteyn was no. 127 on the list drawn up by the antiquary Cornelis Alkemade before the sale. In the advertisement for the sale, the drawings were described as part of Bentes's library: "de fraje en nette bibliotheek van wijlen den Hr. Schepen Hillebrand Bentes...mitsgaders omtrent 250 tekeningen van Kasteelen en Adelijke huysen in de Provincies van Holland en Utregt, door Roeland Roghman."

Roelant Roghman’s oeuvre comprises about forty prints of topographical views and alpine landscapes; some thirty-five paintings, most depicting forest and mountain scenes;2 and numerous drawings, which belong to one of two large groups. The first consists of freely invented views of alpine terrain or scenery reminiscent of the Dutch countryside, drawn in a loose, summary manner with ink and wash over a sketch in black chalk.3 Topographical subjects make up the second group, which includes an exceptional series documenting country houses in the provinces of Holland, Utrecht, and Gelderland. Roghman executed these in 1646 and 1647, when he was barely twenty years old. Distinguished by ingenious compositional variations and a breadth of execution to match their ambitious dimensions and scale, they rank among the masterpieces of seventeenth-century Dutch landscape drawing. An early inventory lists 247 views of 150 different houses, of which more than 220 have been identified and catalogued.4 As topographically accurate records of historic—and often no longer extant—Dutch houses, they are of inestimable documentary value. Roghman presumably produced the series on commission, but its origin remains a mystery.5

An eighteenth-century inscription on the verso of the Harvard sheet identifies this castle as Cronesteyn, and the drawing appears on manuscript lists of the castle series compiled in 1708 and around 1730.6 A print published in 1713 shows a bird’s-eye view of the house and property, which was located southwest of Leiden on the road to the village of Zoeterwoude (Fig. 1).7 A manor house had stood on the site since the Middle Ages. In 1574, when Spanish armies approached to besiege Leiden, the Dutch partially destroyed Cronesteyn to prevent its use by the enemy.8 Two years after the siege, Daniel van Wijngaarden acquired the property and undertook the construction of the castle depicted in Roghman’s drawing. Van Wijngaarden sold it in 1605, and in 1620 it came into the hands of Bartholomeus van Panhuys, who enlarged and improved the building. His son, Pieter van Panhuys, owned the castle when Roghman visited.9 It was demolished in 1787.10

A proposed reconstruction of Roghman’s itinerary places the Harvard work among the earliest drawings in the series, dating it to 1646.11 Like the draftsman depicted in another of his early views (Fig. 2),12 Roghman sat on the opposite bank of the moat. The low viewpoint enhances the monumentality of the castle, and the picturesque composition of the architecture, with its impressive tower and side-by-side step gables, fills much of the sheet. As in other castle drawings, the artist accentuated the vertical lines at the corners of the building, where walls in sunlight intersect those in shadow, a strategy that brings out the volume and mass of the structure. The forceful diagonal recession of the brightly illuminated wall directly across the water establishes a dynamic flow of space that continues through the composition.

Traces of an abandoned sketch, executed primarily in graphite, are visible under infrared light above the round tower and on both of its sides.13 Partially erased and covered with wash, the sketch is difficult to decipher but is of the type Roghman would use initially to outline the elevation of a building.14 While enough is legible to ascertain that the architectural features do not correspond to those of the finished composition, it is unclear whether the aborted sketch showed a different view of Cronesteyn or another house.15

5 Neither Hillebrand Bentes (1677–1708), the first recorded owner, nor his father (the important Amsterdam collector Albert Bentes [1643–1701], who might have owned the series before his son) could have been the original patron. On the possible patrons of the series, see Van der Wyck et al., vol. 1, pp. 6–7; Michiel C. Plomp, The Dutch Drawings in the Teylers Museum (Ghent and Doornspijk, 1997), p. 322.

6 The verso inscription is in one of the hands (identified as “handschrift C” by Van der Wyck et al., vol. 1, p. 16) that annotated the versos of many of Roghman’s castle drawings. It is the only view of Cronesteyn on the lists drawn up by the antiquary Cornelis van Alkemade before the 1708 sale and by Abraham de Haen around 1730; Van der Wyck et al., vol. 1, p. 3, no. 127 (Alkemade), p. 12 (De Haen), and cat. 96, p. 116. The drawings were consigned to the 1708 sale by the heirs of Hillebrand Bentes (see n. 5) and described in an advertisement for the sale as part of Bentes’s library: “de fraje en nette bibliotheek van wijlen den Hr. Schepen Hillebrand Bentes . . . mitsgaders omtrent 250 tekeningen van Kasteelen en Adelijke huysen in de Provincies van Holland en Utregt, door Roeland Roghman”; idem, vol. 1, p. 6.

13 My thanks to Anne Driesse of the Straus Center for Conservation, Harvard Art Museums, for imaging this sketch during treatment of the drawing.

15 Some architectural elements discernible in the sketch—stepped gable, round-headed windows beneath a small pediment—recall one of Roghman’s views of Swieten (Van der Wyck et al., vol. 1, no. 188, p. 207), which was near Cronesteyn. In idem, vol. 2, pp. 115 and 127–30, note that the four views of Swieten suggest that Roghman might have been experimenting with a working method and that the similarity of the Harvard Cronesteyn and the view of Swieten cited above indicate they were done on the same excursion. 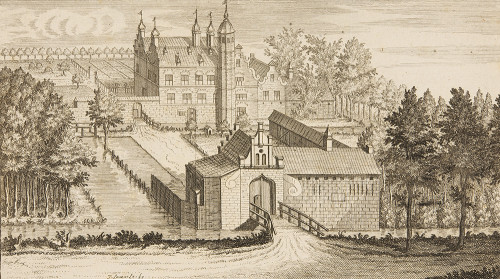 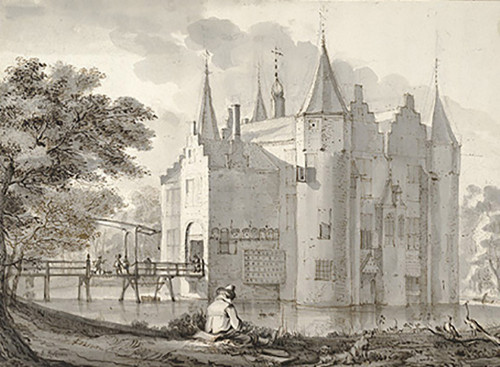