Jacques de Gheyn II collaborated with eminent Dutch political and military leaders (see 2011.512), scientists, and authors. While residing from 1595 through 1600 in the university city of Leiden, he drew or engraved portraits of several of Holland’s most prominent intellectuals and designed illustrations for some of their works.1

The Harvard drawing was the model for an engraving in a series depicting deeds of virtuous women, each of them hailed in eight lines of Dutch verse composed by the classical scholar and poet Daniël Heinsius (1580–1655) (Fig. 1).2 Zacharias Dolendo (c. 1573–c. 1601), De Gheyn’s pupil and assistant, incised the model to transfer the composition to the plate, and the image appears in reverse in the print, which, in the second state, credits De Gheyn with the invention of the series and Dolendo as its engraver.3 None of the eight prints in the set bear dates, but they were convincingly assigned by Jan Piet Filedt Kok to circa 1599.4 Heinsius settled in Leiden in 1598, and it is unlikely that he and De Gheyn met before then.5 Dolendo died in 1600 or shortly thereafter, so he must have finished the plates around the turn of the century—probably before De Gheyn left Leiden in 1601 or 1602 and ceased to work as an engraver and print publisher.6 Between 1598 and 1600, De Gheyn drew the title page and models for the twenty-four plates in Heinsius’s Emblemata Amatoria (Amsterdam, 1601),7 and it is reasonable to assume that they planned and carried out the series of virtuous women during the same period.

In the first state of the engravings, the text fields in the lower margins remained empty, and Heinsius’s verses were printed in letterpress on the versos of the sheets. Impressions of the first state were issued as a booklet in 1606 by the Amsterdam printmaker and publisher Jodocus Hondius, who added a title page and prologue.8 That De Gheyn abruptly gave up print publishing after 1601 probably accounts for the postponement of the series’ formal publication until 1606. In the second state, published after 1615 by Claes Jansz. Visscher, Heinsius’s texts were engraved in the margins beneath the images (see Fig. 1).9

Of the three surviving models for the prints, only the Harvard drawing bears a date.10 Although previously read as 1591, the last digit is surely a 9, in which the loop was drawn tightly and the ink bled into a solid shape.11 A date of 1599 falls within the period when De Gheyn and Heinsius both lived in Leiden and is supported by the drawing’s compelling similarity, in technique and style, to the artist’s designs for a series of engravings produced in that year, The Riding School or Exercise of Cavalry (Fig. 2).12 Further, the figure of Lucia in the second plate of the series of virtuous women closely resembles the female personification of Justice that De Gheyn designed in an engraving from about 1598.13

The legend of the Women of Weinsberg enjoyed a wave of popularity in art and literature in the Netherlands during the 1590s and the first decade of the seventeenth century.14 The fictional incident purportedly occurred in 1140 during the conflict between the Bavarian Welf and the Swabian Hohenstaufen dynasties for the right to succeed Holy Roman Emperor Henry V. Preparing to storm the besieged Welf stronghold of Weinsberg near Heilbronn in southwestern Germany, the Hohenstaufen king Conrad III agreed to allow the women of the town to flee safely, taking only what they could carry on their backs. When the women emerged carrying their husbands, Conrad, amused and awestruck by their cunning and virtue, allowed them to pass unharmed. The subject resonated particularly in Haarlem and Leiden, which had withstood brutal sieges by Spanish armies between 1572 and 1574.15

9 Filedt Kok and Leesberg, part 2, nos. 332–39, pp. 153–58, reproduce the prints in the second state. Heinsius’s verses read, “De Keyser heeft de stadt, de Keyser heeft de wallen / Wy zyn in s’vyants wil end’ in zyn macht gevallen / Ons mannen gaen ter doot: en al haer vrome daet / En heeft haer nievers toe dan tot de doot ghebaet. Haer leven staet in ons: ons is wat toegelaeten / Soo wy dat wel besteen dat sal haer connen baeten / Een yeder wort ghejont al dat hy draeghen kan / Wy laeten hem ons ghoet, wy nemen onsen man” (The emperor has the city, the emperor has the walls / We are subject to the enemy’s will and his power / Our husbands go to the slaughter, and all their pious deeds / Gain them nothing but their deaths / Their lives depend on us: Something is allowed to us / So we can put it to good use and benefit them / Everyone is allowed all that she can carry / We leave them our goods, we take our men).

13 This observation was made by Van Regteren Altena, vol. 2, cat. II 197, p. 50, and under cat. II 276, p. 59; Van Regteren Altena attributed the engraving to Dolendo, but Jan Piet Filedt Kok assigns it to the workshop of Jacques de Gheyn II; Filedt Kok and Leesberg, part 1, no. 123, pp. 186, repr. p. 185. The reading of the date on the Harvard sheet as 1591, when Heinsius was eleven years old, has misled scholars to hypothesize that De Gheyn produced the series in the early 1590s for some other purpose and the texts by Heinsius were added later, and that the model for the Women of Weinsberg, and the one for Lucia, the second engraving in the series, predated the other designs and did not fit thematically with them; Moerman, pp. 53, 55, and 61–2; Van Regteren Altena, vol. 1, pp. 28 and 102, vol. 2, under cats. II 275–82, p. 59; Filedt Kok and Leesberg, part 2, p. 153. Van Regteren Altena (vol. 2, p. 59) implausibly maintained that the technique of the Harvard drawing and its figure types corroborated its dating to 1591. 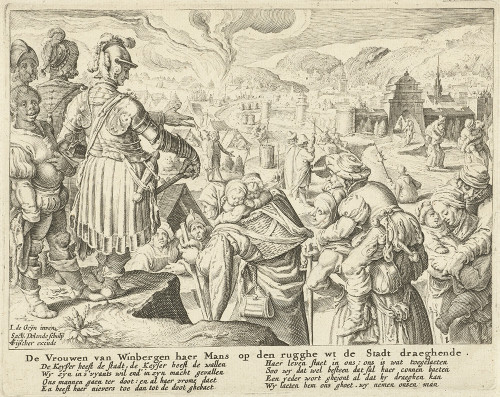 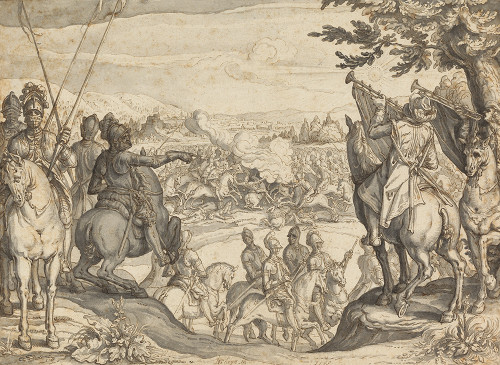 An Exhibition of Dutch and Flemish Drawings and Watercolors, checklist, Unpublished (1954), cat. no. 41, p. 10

The Draughtsman at Work. Drawing in the Golden Century of Dutch Art, checklist (unpublished, 1980), no. 35