The biblical Eliezer traveled to the birthplace of his master, Abraham, to find a wife from among kinsmen for the patriarch’s son Isaac. Stopping at a well where the young women came to fetch water, Eliezer asked God to reveal Isaac’s bride to him: “when the virgin cometh forth to draw water, and I say to her, ‘Give me, I pray thee, a little water of thy pitcher to drink;’ And she say to me, ‘Both drink thou, and I will also draw for thy camels:’ let the same be the woman whom the Lord hath appointed out for my master’s son” (Genesis 24:43–44). No sooner had Eliezer finished this supplication than Rebecca, granddaughter of Abraham’s brother Nahor, approached the well, and the conversation envisioned in his prayer ensued. In this drawing, Eliezer rests the pitcher on his thigh and exchanges glances—and perhaps words—with Rebecca. She wears a bern, a flat, broad-brimmed hat worn by Roma women in the sixteenth and seventeenth centuries. Because of the presumed Egyptian origins of the Roma, artists in Rembrandt’s circle sometimes outfitted women from Old Testament narratives with this headgear.1

A pupil of Rembrandt around 1650, Willem Drost painted portraits, head studies, and biblical scenes in his teacher’s style during his first years as an independent artist.2 By 1655, Drost moved to Venice, where he adopted the tenebrist manner practiced by Giovanni Battista Langetti and Johann Carl Loth.3 He died in 1659 at the age of twenty-five.

The pen work of the figures in the Harvard composition resembles the technique of Drost’s Ruth and Naomi (Fig. 1), while the handling of the landscape recalls the rendering of foliage and rocky setting in another of the artist’s drawings, Noli me Tangere. These two sketches relate directly to paintings by Drost and thus provide the basis for attributing the considerable oeuvre of drawings now assigned to him.4 Characteristic traits of his draftsmanship are the large scale of the figures; broadly spaced diagonal hatchings; distinctive renderings of hands, feet, faces, and elements such as the tufts of foliage at the left; and smudging of the ink on the front of the wall. While working on the Harvard sketch, he covered Eliezer’s awkwardly foreshortened right foot with white opaque watercolor and, with emphatic pen strokes, strengthened the contours of Eliezer’s legs and extended Rebecca’s left hand. While many of Drost’s drawings represent biblical subjects, they also include studies of single figures, genre scenes, and a landscape.5 Eliezer and Rebecca at the Well, like all of the artist’s Rembrandtesque works, dates from the first half of the 1650s.6 The watermark in the paper is identical to that in an impression of Rembrandt’s 1655 etching Pieter Haringh (often called “Young Haringh”) and nearly identical to those in another impression of the same print and a drawing by Drost, Christ and the Woman Taken in Adultery.7

When sketching narrative scenes from the Bible and other canonical literary sources, Rembrandt’s students not only consulted the text but also mined the collections kept in his workshop, which included pictures and drawings by the master and former pupils.8 Drost has here adapted parts of his composition from a painting of Eliezer and Rebecca by an unidentified Rembrandt student or follower and bases his figure of Eliezer on a drawing of the 1640s attributed to Ferdinand Bol (Fig. 2).9 He improves upon his models by eliminating extraneous details and concentrating on the solemn communication between the two protagonists, whose fateful meeting, as Rebecca’s father and brother understand, “proceedeth from the Lord” (Genesis 24:50).

7 The Paschal Lamb watermark in an impression of Rembrandt’s etching Pieter Haringh in the Metropolitan Museum of Art is identical to that in the Harvard drawing; see watermark description under “Marks.” A nearly identical Paschal Lamb watermark (Eric Hinterding, Rembrandt as an Etcher: The Practice of Production and Distribution, Studies in Prints and Printmaking 6, Ouderkerk aan den IJsel, Netherlands, 2006, vol. 2, p. 167, D.a.b.), occurs in another impression of the same etching and, as noted by Hinterding, in the drawing Christ and the Woman Taken in Adultery in Rotterdam; Jeroen Giltaij, Drawings by Rembrandt and His School in the Museum Boymans-van Beuningen, vol. 2. (Rotterdam, 1988), no. 154, pp. 282–83, as Anonymous, Rembrandt School. Albert Elen in Rembrandt in Rotterdam: Tekeningen van Rembrandt en zijn kring in het Museum Boijmans Van Beuningen=Rembrandt in Rotterdam: Drawings of Rembrandt and His Circle in the Museum Boijmans Van Beuningen (Rotterdam: Museum Boijmans Van Beuningen, 2005), cat. 52, n.p., as “Willem Drost(?).” As Peter Schatborn noted in Emmanuelle Brugerolles, Mària van Berge‑Gerbaud and Peter Schatborn, Rembrandt et son entourage (Paris: École nationale supérieure des Beaux-Arts; Ajaccio, France: Palais Fesch-Musée des Beaux-Arts, 2012), under cat. 38, pp. 128–30, repr. fig. 1, the Rotterdam study is attributable to Drost, as its technique is virtually identical to that of works such as Ruth and Naomi (see n. 4 above) and The Angel Departing from the Family of Tobit, Bevers et al., cat. 33.2, pp. 200–201, repr., p. 199. The watermark in Drost’s drawing Noli me Tangere (see n. 4) is also a Paschal Lamb, but not further specified by Jan Garff in Tegninger af Rembrandt og andre hollandske kunstnere fra det 17. Ârhundrede [arhundrede] i Den Kongelige Kobberstiksamling (Copenhagen: Statens Museum for Kunst, 1996), cat. 12, p. 39.

8 Holm Bevers in Bevers et al., pp. 19–22. Bevers notes (p. 20) that former pupils must have had access to Rembrandt’s collections and might have returned to his workshop to draw with him after they were already independent masters.

9 The painting was published by Werner Sumowski, Gemälde der Rembrandt‑Schüler in vier Bänden (Landau, Germany, 1983), vol. 4, cat. 1959, pp. 2057 and 3026, repr. fig. 1959. In both the painting and the Harvard drawing, Rebecca wears a wide, flat bern and stands with one arm lowered and the other drawn across her waist; the trunk of a large tree rises at the left, the wall on which Eliezer leans appears in the same location, and the contour of the distant hill descends from left to right. Sumowski dated the picture around 1650 but noted that its composition was based on that of a drawing of the early 1640s (now in the Fondation Custodia, Frits Lugt Collection, Paris) that Peter Schatborn has attributed to Carel Fabritius; Peter Schatborn, Rembrandt and His Circle: Drawings in the Frits Lugt Collection (Bussum, Netherlands, 2010), vol. 1, cat. 77, pp. 199–202, repr. vol. 2, p. 91, fig. 77. The source for Drost’s figure of Eliezer was evidently a drawing in the Albertina that portrays the servant resting the pitcher on his leg and looking up at the prospective bride (see Fig. 2); Eliezer and Rebecca at the Well, brown ink with brown and gray wash, 180 × 292 mm, Vienna, Albertina, 8768; Sumowski (1979), vol. 1, cat. 261x, p. 546, as attributed to Bol and dated to the second half of the 1640s. 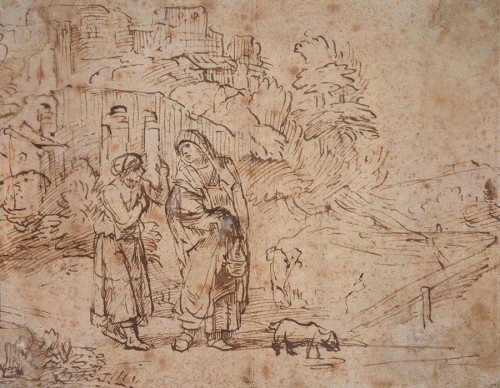 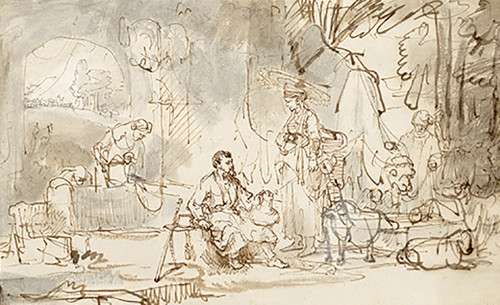 Fig. 2 Ferdinand Bol (attributed to), Eliezer and Rebecca at the Well