Deodat van der Mont was almost certainly Peter Paul Rubens’s first pupil and, as the 17-century biographer Cornelis de Bie attested, also his “best friend.”1 In testimony recorded in 1628, Rubens declared that Van der Mont was well advanced in his training by 1600, when he traveled with his master to Italy. After they returned to Antwerp in 1608, Van der Mont set up his own workshop in the city. De Bie characterized Van der Mont as a learned painter and polymath who was ennobled by Duke Wolfgang Wilhelm of the Palatinate-Neuburg (1578–1653) for his “great understanding of the noble art of painting, geometry, astrology, and other branches of knowledge.” De Bie cited four pictures by Van der Mont hanging in Antwerp religious institutions in the 17th century, adding that works by him graced “many other churches in Flanders, Hainault, Artois, and . . . Italy.”2 Very few, however, are known today.3

The Harvard work is a composition study for the signed and dated Lamentation with St. Francis of Assisi (1623) in the church of Onze-Lieve-Vrouw-ten-Hemelopneming (Our Lady of the Assumption) in Munsterbilzen in the Belgian province of Limburg (Fig. 1).4 It is squared in graphite, and the cells of the grid are numbered 1 through 18 along the sheet’s bottom edge. The squaring and high degree of finish indicate that the study represents an advanced stage in the development of the design and might even have served as the modello for transfer and enlargement to the canvas.

Although fully resolved and precisely rendered, the drawing differs in several significant details from the painting. In the oil painting, Van der Mont cropped the composition all around and eliminated the three figures at the upper left of the drawing as well as the head of the man adjusting his spectacles. In the study, the disciple kneeling at the left crosses his arms over his chest and glances upward, while in the finished work he looks straight ahead and reaches with his left hand toward Jesus’ limp forearm. With his right hand, he holds the cloth sheet with the words “Jesus of Nazareth, the King of the Jews” in Latin, Greek, and Hebrew, although only parts of the texts are decipherable. In the drawing, the much smaller cloth sheet, inscribed only IESVS NAZARENUS, appears with other instruments of the Passion at the lower center. Finally, Van der Mont replaces St. Francis’s curly mop of hair at the lower right in the study with a tonsure in the painting. The changes to the composition and details between the drawing and painting affirm that the Harvard sheet is a study for, not a copy after, the picture.5

The Harvard work is the only securely documented drawing by Van der Mont. More than a dozen others have been ascribed to him, including a pen-and-ink model sheet with 12 heads of Turks copied from woodcuts by Jost Amman; the sheet bears a plausible old attribution to Deodate del Mondt on its verso.6 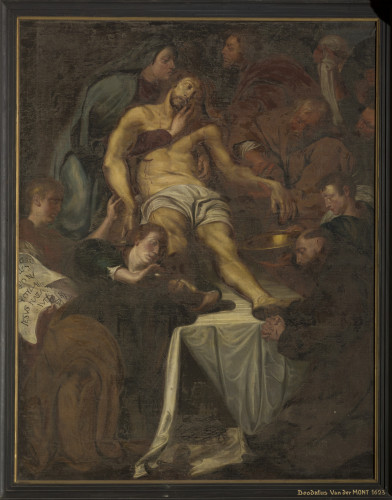 Commentary
Preparatory for a painting by Deodat van der Mont in the Onze-Lieve-Vrouw Tenhemelopnemingskerk (Church of Our Lady of the Assumption) in Munsterbilzen, Belgium.